© Fabrice Monteiro. Untitled #1, The Prophecy | Courtesy of the artist

The stunning production of the photographer Fabrice Monteiro is intrinsically multicultural, and his works are a bridge between Africa and Europe, as well as between the worlds of fashion photography and street photography. Monteiro’s original reuse of the local culture allows him to better convey the message of his projects to local people.

Born from Beninese father and Belgian mother, Fabrice Monteiro brings the influence of both cultures to each of his works. As he doesn’t feel perfectly fit either of the two, the artist prefers to create his own world, which reflects his personality and history. Africa, with its culture, society and religion, is always his primary source of inspiration. The memories of religious ceremonies and Voodoo rituals from his Beninese childhood are reflected in the frequent presence of spirits in his photographs. Monteiro himself defines his approach as an ‘in-between,’ a bridge; keen to avoid exotic representations of Africa, he maintains his personal and multicultural perspective, and the results are far from the classical images of Africa to which individuals may be accustomed.

But his projects are not only a bridge between two cultures: Monteiro, in fact, started his career as a model, and he reuses the codes of fashion in his work. As a result of these influences, his images are truly diversified, going from fashion to street photography. While the first kind of work is more artificial and conceptual, with a lot of mise-en-scène, the second one is more documentary, but still conceived with a precise objective.

In 2007, after a career as a model, Monteiro started working on the other side of the camera thanks to Alfonse Pagano, an American photographer and friend who granted him access to his studio in New York City. Monteiro realized that, having observed for many years the photographers with whom he had worked, he had accumulated enough knowledge to be able to start his own photography practice.

Naturally, he started taking pictures for the fashion world, which he abandoned quickly in favor of more personal subjects. The work Marrons, dedicated to the theme of slavery, originates from the history of his family and of Benin. ‘Monteiro,’ in fact, is a Portuguese surname, given to one of the artist’s ancestors when he was deported to Brazil and which he maintained when he returned to Benin. This country, which was also an outpost of slave trade, was seen as the natural setting of this work, because Beninese people still bear great facial resemblance with the people who ended up in Haiti and Jamaica.

Ancient documents and images were the inspiration for these strong portraits of shackled people. Monteiro’s objective was to confront people with a dark chapter of human history in order to recall what human beings are able to do to others in the name of money. For this reason, the shackles used had to be as realistic as possible. 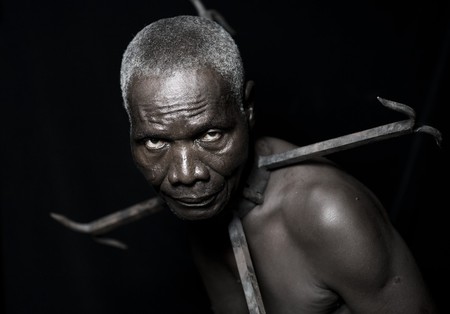 One of Monteiro’s well-known projects comes from a personal experience he had when traveling between Africa and Europe. Upon returning to Africa after 20 years in Europe, Monteiro was shocked by the environmental degradation and pollution he found in Dakar. As he says, one major problem in Senegal is that teenagers and children are used to living in this environment, as they have grown up surrounded by plastics, and they perceive it as normal. To combat this lack of environmental education, his project The Prophecy consists of a series of images made to illustrate a tale for children, in order for them to conceptualize and understand environmental degradation and pollution.

Monteiro wanted the images to be as effective as possible and reverted to animism and brought spirits into his photographs. Animism, in fact, is a fundamental part of people’s lives in West Africa, even Catholics and Muslims. The result is a series of impressive images depicting oversize female figures wearing sophisticated, garbage-made costumes in a powerful interaction with the polluted environment. These supernatural entities warn the audience, and in particular young generations, about the impacts of their habits.

The costumes were created by local designers, recycling materials such as cans, tar, and all sorts of plastic rubbish so as to emphasize the message of the photographs. In order to represent air pollution due to car emissions, for instance, hundreds of car reflectors have been used as part of a costume. 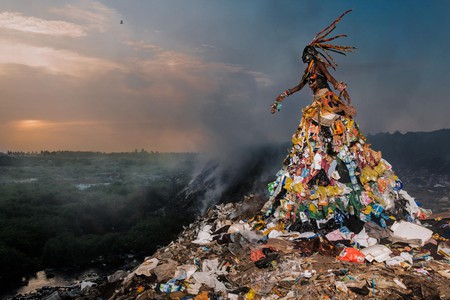 © Fabrice Monteiro. Untitled #1, The Prophecy | Courtesy of the artist

Even though The Prophecy was born in Senegal, Monteiro is well aware that pollution is a global problem and that environmental devastation is ultimately linked to global warming. Therefore, Monteiro has started to create ‘Prophecies’ all around the world, and last year he worked on a project dedicated to building awareness about the importance of protecting the coral barrier in Australia. Monteiro’s approach remains the same: the use of the local culture in order to raise interest in local people for his images and their message.

Monteiro has a suggestion for those who may be interested in photography: ‘I believe that you have to start looking into yourself, into what you are concerned with, your angers, your fears, the thing that you don’t understand’ in order to find the subjects you are interested in and to develop them. ‘The great thing about photography,’ he says, ‘is that the medium is almost a therapy.’