Belgium is a land of architectural wonder, with several shifts in design throughout its history creating a rich cross-section of European heritage and design. Belgium is known for the beautiful examples of Art Nouveau in Brussels and beyond, exemplified by renowned architects Victor Horta and Henry van de Velde. Today, the capital and other cities throughout the Flanders and Wallonia regions are filled with diverse collections of contemporary architecture, sitting alongside older buildings from decades past. 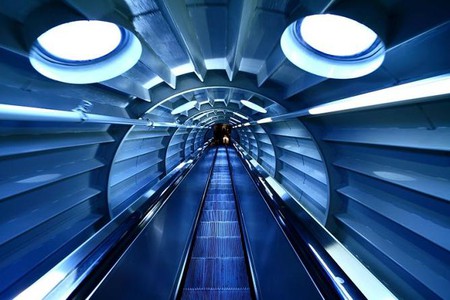 This iconic structure dominates the Brussels skyline and competes with the minuscule yet much loved Manneken-Pis as Brussels’ most iconic landmark. Built for the 1958 World Fair in Brussels, the Atomium was used as the main focus point of the event, and as the primary pavilion centrepiece. The structure was intended to be deconstructed and removed at the end of the fair, but a love for this unusual, yet appealing architectural landmark has ensured its survival into the present day. It was designed by engineer André Waterkeyn, with architects André and Jean Polak fitting the impressive spherical orbs, completing ‘the atom’.

Inside, there is a shop on the groundfloor and a restaurant and viewing area at the top. The Atomium is unique in its being and presence; historic, yet futuristic, this structure is endlessly contemporary and inspiring, resisting classification.

The visually bold and impressive Antwerp Law Courts was built as part of the revitalisation plans for the Zuid (south) district of the city and opened by King Albert II in 2006.. A focal point for others to draw architectural inspiration from, this nautical showcase was designed by the Richard Rogers Partnership, and resembles ship sails docked in a harbour. At a cost of £86m, this project has become a focal point of importance for the country, and acts as a southern gateway into the city.

Ivan Harbour was selected as the project architect and the structure is a large-scale collection of metallic sails, towers and trees. Much of the building is bright, and lit by natural light with large transparent areas. Inside, there are eight civil and criminal courts, offices, chambers, 36 courtrooms, accommodation wings, a café, and a grand hall, the Salle des Pas Perdus (‘the hall of lost steps’).

This stunning station was unveiled in 2009, built after the previous international-style building was demolished. The current structure was commissioned by the Belgian state railway and follows a futuristic design style. Liège-Guillemins is almost otherworldly and ethereal in appearance, complete with sweeping curves and majestic shiny slopes. The project was developed and built by architect Santiago Calatrava, and houses nine tracks and five platforms, laid down in modern, high-speed style.

Calatrava has used his multi-talented background as an architect, engineer, sculptor and artist to create a memorable, contemporary piece of artwork that has won legions of contemporary art fans throughout Belgium and the world. 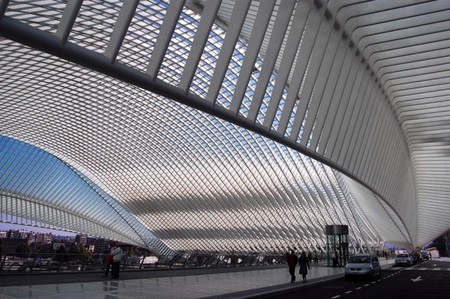 This sustainable housing project was built by BURO II & ARCHI+I in north-western Brussels, and called Termonde and Gérance. The project intended to complement the housing already built in the area in the 1920s, courtesy of architect Victor Bourgeois. Today’s buildings are low-energy houses and apartments that have been aligned in a saw-tooth formation in some places, more classical in others. The exterior has been created with low walls and foliage, with green and seating areas to amplify the open-space feel of the area. The external walls are coated in precast concrete in a nod to the revolutionist work carried out by Bourgeois. To make the buildings more environmentally friendly and self sufficient, solar panels have been fitted and non-harmful materials were used during construction. There is also a tool in place to capture rainwater for the building.

This is the cathedral of all train stations. Antwerp’s Central Station was built circa 1895-1905 by Bruges architect Louis Delacenserie and it is a truly breathtaking venue.

This large complex possesses a great dome and eight large towers. Tragically, six towers were demolished during the 1950s. Due to extensive restoration work from architect Jan van Asperen carried out from the 1990s until 2009, the station is back to its former glory and the towers restored, albeit with significant additional contemporary areas that create a contemporary world-class train station. The station is with multiple levels, and whilst using the long network of escalators, visitors can witness numerous trains arriving and departing on different platforms, connecting Antwerp to the rest of Europe. 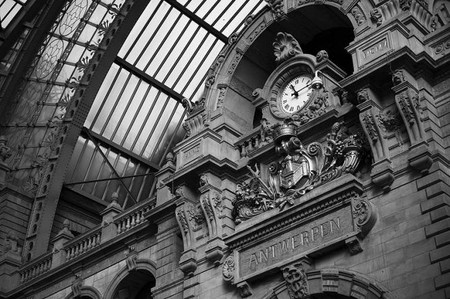 This futuristic abode built in 2012 is located in the forested outskirts of historical Bruges. The house is made primarily of glass and wood in a rectangular style, constructed by architects Govaert & Vanhoutte Architectuurburo. They have used a serious of concrete, wood and aluminium to complete the structure. Villa Roces is well lit by natural light, and has a semi-submerged swimming area running along one side of the house, making this a truly inspired piece of contemporary architecture in the heart of old Flanders.

In the heart of Europe, no discussion of Belgian architecture would be complete without detailing the infamous Berlaymont Building in Brussels, headquarters of the European Commission. Once dubbed ‘Berlaymonster’, the building was originally built in 1969, suffered from the commonplace asbestos evacuation, followed by numerous delays and reconstruction issues in an effort to transform the site. The original architect was Lucien De Vestel, a modernist prefab enthusiast, with assistance from Jean Gilson, and André and Jean Polak.

After thirteen painful years, the result was a modern metal and glass masterpiece, with futuristic, space-age designs that remain as exciting and interesting today as they were upon first unveiling. The renovation work was carried out by architects Pierre Lallemand, Steven Beckers and Wilfried Van Campenhout. 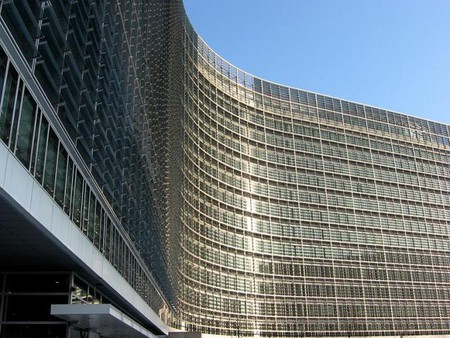 Ghent City Pavilion is a standout piece of contemporary architecture in the city centre, surrounded by historical buildings. The structure was designed by architects Robbrecht & Daem, with Marie-José Van Hee, and was completed in late 2012. Counting the Belfry and St. Nicholas’ Church as neighbours, the Pavilion holds a modern look, whilst still retaining a contemporary-Medieval charm fitting in with its surroundings.

The former structures including the Mathildis Clock and the Minne sculptures were retained during the Pavilion’s construction. The structure is multi-purpose but is primarily used for public events. Made of a combination of wood, glass and concrete, the market-place masterpiece has hosted numerous dance performances, sales and concerts since opening. Underneath the Pavilion sits the Grand Café and the Belfort Stadscafé en Stadsrestaurant, which are great spots for visitors to enjoy some food and drink. 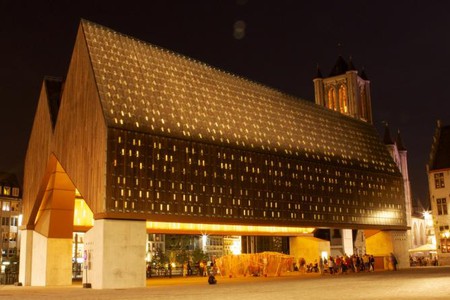 This eye-catching building is reminiscent of folded layers of tagliatelle pasta, albeit metallic and infused with glass-walled offices as filling. Completed for global materials technology group Umicore by architects CONIX RDBM, the building is a futuristic masterpiece that stands out amongst the other buildings in a large industrial park. The construction allows plenty of natural light to fill its large open spaces, complete with bright interior design. All of this makes the Umicore Building a visual focal point in an area dominated by inexpressive industrial buildings, some in various states of urban decay. 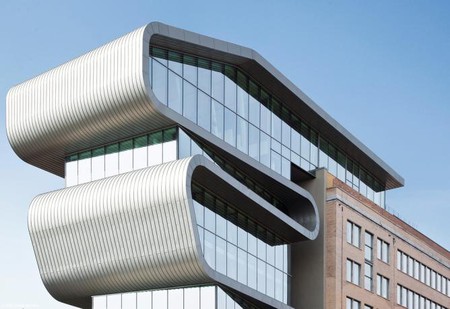 This fresh art gallery and museum houses some of the finest works from Belgian artists, both classical and modern, in contemporary surroundings. M has been restored and rebuilt in a project spanning three years. As a successor to the Vander Kelen-Mertens Municipal Museum, the new complex was masterminded by renowned Belgian architect Stéphane Beel who is based in Bruges and Ghent.

The result is an appealing amalgamation of historical and futuristic features. The museum is extremely proud of its cutting-edge look and offers visitors an ‘On the roof of M’ architecture tour, where they can appreciate the distinguishing points of the building’s architecture, while being guided through each area. There are also exhibition spaces, café, shop, auditorium, child area, roof space offering great views of the city, and courtyard. For those planning to visit the museum in the summer of 2014, there will be an exhibition showcasing the solo work of French artist Isabelle Cornaro, ending on 3 August. 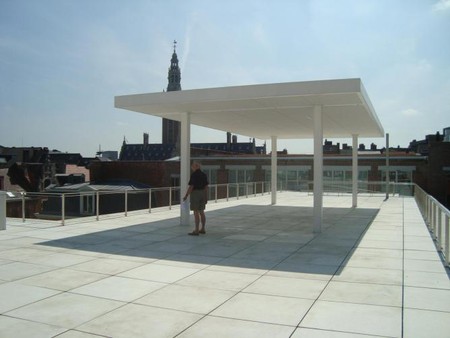 © Caroline Van Doren
Give us feedback