A Tribute To Chantal Akerman, Cinema's Pioneer Of Modern Feminism 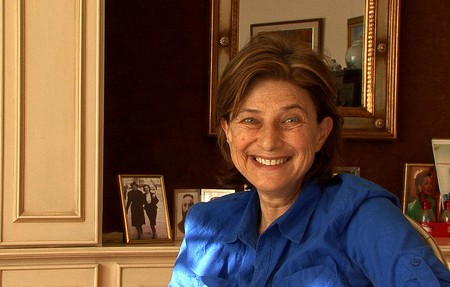 Considered one of the greatest minds to come out of European cinema, Chantal Akerman died at the age of 65 in October 2015. Here, we take a close look at the individualistic Belgian filmmaker, an icon of experimentalism whose work continues to influence the greatest directors working today.

Chantal Akerman breathed cinema from a young age. After sneaking in to see Jean-Luc Godard’s Pierrot le fou (1965) in the theater (rated 16+), the 15-year old girl cherished ambitions of becoming a filmmaker. In pursuit of this dream, she enrolled in the Brussels film school l’INSAS at 18, only to drop out after three months while making her first film, Saute ma ville (1968). In the darkly humoristic black and white short, Akerman is seen messing about in a kitchen, accompanied by a frantic voice-over humming and laughing, before lying down on the gas stove and blowing herself and her hometown to pieces.

A New York state of film

At the time there wasn’t anything particularly artistic going on in the Belgian film scene, so Akerman went in search of greener cinematic pastures in New York – the city where dreams, after all, do come true. Impressed by the experimental works of Stan Brakhage and Michael Snow among others, Akerman too went with the road less traveled. La Chambre (1972), the first film she made while in New York, consists entirely of one shot: a ten-minute long pan of a single cluttered room, with the camera turning around its own axis multiple times. Again the body on screen is Akerman’s, and we see it in various different positions on the bed every time the camera passes her: at one time eating an orange, another time simply lying down in abandon. An absorbing study of the everyday and of solitude, La Chambre already contains the themes of her most influential work to come: Jeanne Dielman.

That same year, Hôtel Monterey, a documentary-like 65-minute wandering through a New York hotel saw the light of day. The film mostly pastes together still frame observations of the rooms and their inhabitants, forcing us to reflect on the essence of the moving picture, and on the essence of film itself. Akerman’s trademark long shots and their voyeuristic quality make us uncomfortable – almost too aware of the fact that we’re watching a movie – while at the same time drawing us into the depicted space completely.

1973 marks Akerman’s return to Belgium and the previously fictitiously blown up Brussels. She will receive critical acclaim for Je, tu, il, elle (1974), her first feature length film and most sexually audacious work. In it, a sexually liberated woman (played by Akerman herself) escapes self-imposed imprisonment to have a random sexual encounter with a male lorry driver first, and a woman that is likely an ex-girlfriend second. Many feminist critics grasped on the work to champion Akerman as a feminist filmmaker, although the director has never seen or described herself in that way.

It’s the film that follows, however, that will catapult Akerman into international art house fame while she’s only 25. Jeanne Dielman, 23, quai du Commerce, 1080 Bruxelles (1975) is a recognized masterpiece, influencing generations of filmmakers to come. While the long shot paradigm was already firmly embedded in the art house genre, Akerman put the cinematic tool to different use. For more than three hours on end, we see Jeanne performing domestic tasks in real time and occasionally renting out her body in lackluster sexual encounters with strange men to stay financially afloat.

Endless repetition and the monotony of the everyday have an alienating effect: again we are terribly aware that we are sitting in a dark theater, staring at a screen. Any suspension of disbelief is made impossible. Yet, after a while we find ourselves inhabiting the same cinematic space nonetheless. We’re peeling and cooking potatoes along with Jeanne in her tiny Brussels apartment.

In observing her so closely we come to notice the increasing kinks and irregularities in her routine: putting water in her coffee and forgetting to close the window become signifiers of a gradual psychological breakdown, the extent of which will not be clear until the shocking end. Akerman and Delphine Seyrig (the actress magnificently giving life to Jeanne) pull off a tour de force: Jeanne Dielman is a detailed character study within a formalist setting.

If Je, tu, il, elle was perceived to be a feminist work, Jeanne Dielman surpassed it by far, being hailed as the first film to depict what it was actually like to be a woman in the seventies, and to thematize the subject of female identity. That year and in those to follow, Akerman became an esteemed presence on the international art house scene and – though she never intended to situate herself politically – a lighting example for women and gay (Akerman was a lesbian) filmmakers around the world.

So to get a real sense of Akerman’s importance, we have to take a wider look: who did she influence and by whom was she influenced? The answer to the first question is ‘her peers.’ Akerman was above all a director’s director. Despite always remaining in the margins of commercial success, she’s one of those ‘obscure’ influences you hear more famous directors talking about non-stop. A few days after her passing away in October, Todd Haynes dedicated a New York Festival screening of his Oscar-nominated Carol to Akerman.

The filmmaker referred to her inspiring way of telling the stories of women’s lives and the hypnotizing effects of putting a domestic routine on the screen. Other fans include Gus Van Sant, who counts Akerman as a major influence on movies like Elephant (2003), stating that for him, ‘there was Béla Tarr and Chantal Akerman.’ Gus Van Sant, like Akerman in Jeanne Dielman, confronts his viewer with sudden outbursts of unexpected violence in otherwise mundane settings. The list goes on.

The answer to the second question is twofold. There are artists Akerman admired: the early love affair with Jean-Luc Godard, the more adult admiration of Proust. But to leave it at that would be an oversight of the one person that arguably influenced Akerman’s filmmaking the most: her mother Natalia. An Auschwitz survivor who would never – could never – talk about the trauma, Natalia’s unspoken anxieties weaved their way into her daughter’s work through an ever present sense of isolation.

It is telling that Akerman’s last film, No Home Movie (2015), was a compilation of conversations with her mother, who passed away in 2014. The grief proved a burden too heavy to bear as the director was hospitalized for depression not long after. Akerman would eventually take her own life on October 5th 2015, a day remembered by many as the day the film world lost one of its most inspiring voices.