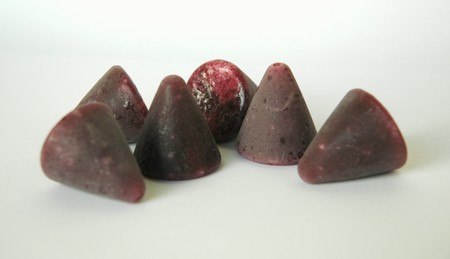 <em>The cuberdon puts up a hard exterior, but inside its just another sweet and gooey candy | © DimiTalen/Wikimedia Commons</em>

The cuberdon: it’s the Belgian specialty candy that has drawn the short end of the publicity stick. When all is said and done though, these lesser known purple and gooey-centered delights are more than up to snuff. We dip into the history of the cuberdon and discover how a happy accident led to the creation of Ghent’s sweetest tradition.

Maybe it’s the weird official name or maybe it’s the unusual color, but the fact remains that the raspberry flavored cuberdon has had a rough time conquering tourists’ hearts the way the Belgian waffle or the country’s luxurious chocolates have. It’s not for lack of a cute nickname or local charm either. Dubbed neuzekes (or ‘little noses’) for their similarity to the human nose – minus the deep violet hue – this traditional candy, originating in Ghent, is one of the most nostalgia-inducing treats around.

As is true for many a delicious candy, it is believed that the cuberdon was partly invented by accident. Inspired in 1873 by a batch of discarded medicinal syrup that had turned hard on the outside but remained liquid on the inside, the pharmacist De Vynck opened up a candy shop. Soon the news of the wondrous cuberdon travelled throughout Ghent and, by the end of the 19th century, its streets were full of vendors with the candies piled high in purple mountains on their bicycle booths. To this day, older locals and Belgians relate to it in a sentimental way, regarding it an artisanal specialty from their youth.

Another possible reason for the cuberdon’s lack of international VIP status is its rather short shelf life. Mostly made out of gum arabic, starch, glocose and sugar, the special treat only has three weeks before its hard crust starts to thicken and the gooey center within starts to crystalize. And when that happens, your cuberdon can no longer be called a cuberdon. After all, half the fun of the cone-shaped candy is biting off the top and sucking out the sweet, purple, gooey goodness within.

Even if this description of how neuzekes-loving Gentenaars devour their treat of choice may sound a bit odd, it seems as if the rest of the world is finally catching on. Confiserie Geldhof, the Belgian cuberdon market leader whose founder is said to have learned the recipe from inventor De Vynck’s grandson, started exporting their specialty in 2012. A wide array of flavors – such as strawberry, blueberry, lemon, apple, anise and chocolate – have now joined the original raspberry, and a special cola flavored cuberdon has been designed to target US markets. Meanwhile, Belgium is experiencing a cuberdon resurgence of its own, with all kinds of foods and drinks adding the cuberdon touch. Among the most popular are syrups meant for pancakes and ice cream, and the typical Belgian spirit Jenever.