Art Nouveau And Its Organic Growth In Brussels 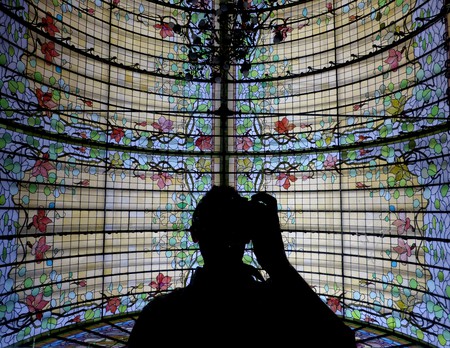 Stephen Smith’s BBC documentary Sex and Sensibility: The Allure of Art Nouveau explored the contexts of Art Nouveau across Vienna, Paris and Britain and although the program offered an overview of the movement, Smith left out one of the most significant hubs of Art Nouveau architecture: Brussels, a city suffused with breath-taking examples of the style’s creative genius. 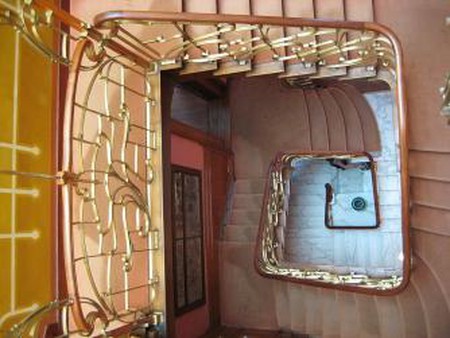 Art Nouveau’s origins can be traced back to the period of industrialization that swept across Europe in the late 19th century. Artistic factions formed in different countries – most notably in France, Belgium, Germany and the UK – and initiated a reaction against mass-made goods, which had begun to flood bourgeois homes. Their backlash focused on the symbols of the still dominant, but ‘old’, spent arts, such as Neoclassicism. These ‘new artists’ yearned for creative expression to be original, hand-crafted and influenced by nature, decorative beauty, novelty, oriental touches and techniques. Moreover, they welcomed all sorts of decorative media. And although Art Nouveau might best be recognized by Alphonse Mucha’s theater posters, the entrance gates to the Parisian metro or ornately painted glass, we cannot forget about the vast architectural heritage that this movement engendered.

Maison Cauchie, rue des Francs 5, Brussels. Gentle, natural curves set sail from the base of the window-pane and, swirling and magical, reach the top of the building; a flower, women, an intricate design unveils. The colors and shapes are extensions of the ground, from which the building springs up. It is a visual representative of the nurtured symbiosis between nature and architecture, a man-made homage to the crafts offered by Mother Earth. 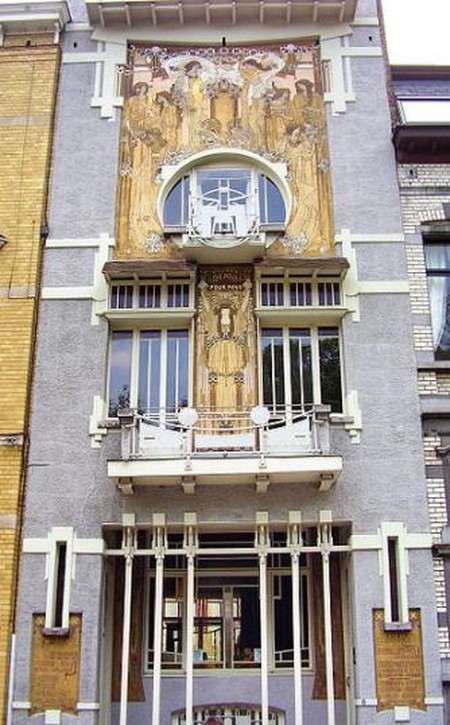 The legacy of Art Nouveau lives on in Belgium and flourishes with nearly every building around the well-to-do Ixelles and Saint-Gilles quarters in Brussels. These houses sprout up around the city as paintings would do in a museum. It is a rare kind of aesthetic uniformity for a city of this size, but practically each quarter is marked with the movement’s influence.

Belgium’s most prominent architect, Victor Horta, had caught on to the style just as it emerged and began to design brick-and-stone artworks of his own – Flemish townhouses – in what is now Europe’s political capital. They bore the characteristics of Art Nouveau inside and out – the spiraling staircases resembled curving shells, the windows followed the roundness of flowers and cosmic geometrics, the columns and walls seemed to dance in a harmony of colors and parabola. It would be difficult to describe the full richness of intertwining decorative elements, which abound in Horta’s architectural work but one of his buildings deserves particular attention.

Victor Horta’s house is now a museum. He had designed every fine detail of the construction, including the exterior and interior décor. The house is an ornament in itself; it lives thanks to Art Nouveau and still thrives upon its creator’s loving hand. The minute decorative details, such as door-handles or woodcuts, are immediately juxtaposed with the timeless grandeur of marble. Together, they give rise to a setting charged with fantasy; a fairy-tale palace. But do not be misled – the decorations should not be mistaken for common kitsch. On the contrary, there is a serene simplicity painted by the mellow colors and a profoundly tangible dialogue with the natural universe in the designs. Just as its doors open, the Horta Museum embraces its visitor with awe-inspiring warmth, subtle allusions to classicism and a vast tranquility. Four Brussels townhouses designed by Victor Horta are now classified as UNESCO World Heritage Sites. 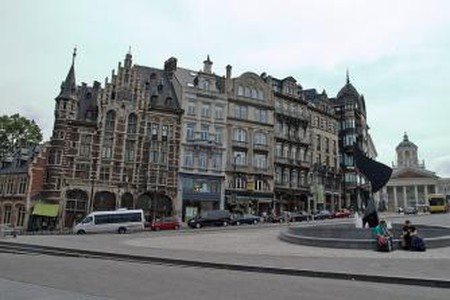 These days, buildings fully restored to their past Art Nouveau glory are still few and far between, but many of these conserved architectural masterpieces now figure on the city council’s list of protected sites and monuments. But the potential scope for renovation goes even further: the business of restoring the hand-painted decorations that once adorned hundreds of maisons de maître around Brussels has recently begun to develop on a serious scale. A number of companies around Belgium offer various conservation services, ranging from elaborate frescoes to hand-sculpted iron railings. And although the prices for this craftsmanship can be staggering, many owners of Art Nouveau houses decide to rediscover the original designs and patterns that were once an essential part of the exterior walls. Sometimes the job involves little more than coloring in the faded images, and sometimes it is a labor of pure creativity, whereby the artist produces a new artistic conception for an old, not necessarily Art Nouveau, house. And upon passing such a house, one revels in the historical and cultural heritage engraved on its walls.

Brussels may not be the most popular tourist destination in Europe, and perhaps for this reason it is often omitted from many cultural maps. But the streets speak for themselves; this is a city where the creative genius of the fin de siècle bloomed, often understated, in the shadow of Europe’s other great metropolises. And yet, it is here that Art Nouveau remains unaffected, inspired, immortal in showing its complex beauty to the great public.