The Ugliest Buildings In Belgium

© Ken Lee/Flickr
While most think of Belgium as a country of imposing baroque and gothic cathedrals, the connoisseurs know what’s hiding just behind this Belgian pride: the most unusual, or in other words, ugliest houses. Whether it’s a matter of money, bad taste or the brilliant idea of a misunderstood artist, here’s our list of the most ‘kitsch.’
Ghent Market Hall, Courtesy of Ken Lee © Ken Lee/Flickr

Concert Hall
In the shadow of the Belfry Tower, right in the old city center of Ghent, you will find the controversial Market Hall, which was finished in 2012. Passers-by call this new edifice ‘barn’ or ‘sheep shed’. Its exaggerated geometry attempts to resemble the continuous fields that once stood here. However, Ghent’s residents think otherwise, as some deem it a ‘monster,’ due to its strong contrast with the surroundings.
More Info
Open In Google Maps
39 Emile Braunplein, Gent, Vlaanderen, 9000, Belgium
View menu
Visit website
Visit Facebook page
Send an Email
Give us feedback

Building, Museum, Bookstore, Brewery, Art Gallery
The Widow by Marlene Dumas, courtesy of Defares Collection and Zeno X Gallery | © Peter Cox / Courtesy of WIELS
The Wiels Museum serves as a contemporary art center. This imposing building once hosted the former Wielemans Brewery, which went through several changes until receiving its new role in 2008. Today, despite its neat modern interior, the industrial style exterior leaves its mark with a dull design, which rather reminds us of the monolithic architecture of the Soviet Union during the 1950s.
More Info
Open In Google Maps
354 Avenue Van Volxem, Forest, Bruxelles, 1190, Belgium
+3223400053
View menu
Visit website
Visit Facebook page
Send an Email
Give us feedback

Also known as the Financial Tower of Liege, this is among the five tallest buildings in Belgium, measuring 136 meters (including the antenna). Although the building itself may not look ugly outright, it is ugly in context. As soon as you notice the thin discrete buildings next to it, a second thought is unavoidable. Watch out for the sunny season: you might feel some dizziness due to the powerful reflection of the sun rays. 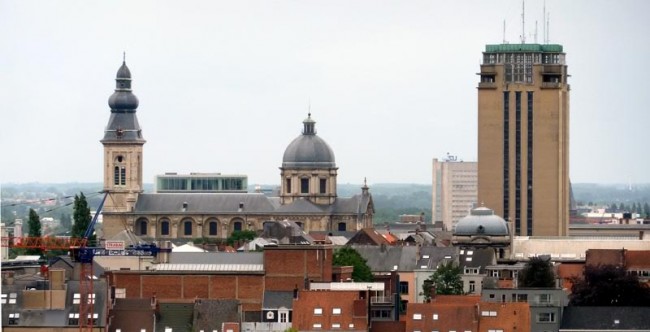 Building, Cathedral, Church, Historical Landmark, Architectural Landmark
Neoclassicistische gebouwen op de Rijschoolstraat, Leuven | © Johan Bakker/WikiCommons
In spite of its great functionality as Ghent University’s main library, this building leaves much to be desired regarding its architecture. Next to the other three medieval towers that made the city one of the most beautiful in the world, this mammoth is a blot on the landscape. A concrete tower block with mighty antennas is not really worth a second glance.
More Info
Open In Google Maps
9 Rozier, Gent, Vlaanderen, 9000, Belgium
View menu
Visit website
Visit Facebook page
Send an Email
Give us feedback

Designed by Renaat Braem, this skyscraper watches over Leuven from the middle of a wide residential complex. Out of the three towers built in the 1960s and renovated a few years later, the tower pictured here loses several points for its huge kitschy antenna and its blatant orange finish. It looks like these modernist towers don’t really fit in what is known as one of the most beautiful towns in Belgium. 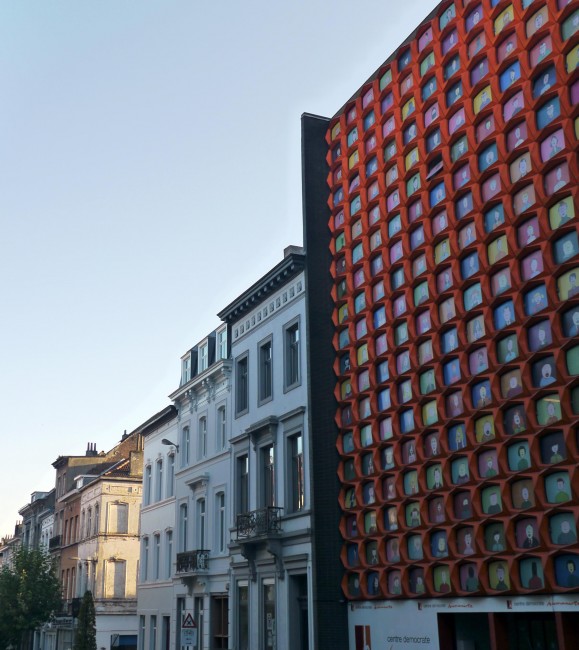 The siège (seat) of the Humanist Democratic Center, Brussels

Six-levels high, the CDH‘s striking façade fails to meet expectations. Some individuals tend to think that this minimalist and playful mosaic look attempts to express beliefs about equality and diversity among citizens. However, their good intention fails at pleasing the citizens’ eyes, given the over saturation of colors, especially of the obtrusive orange. 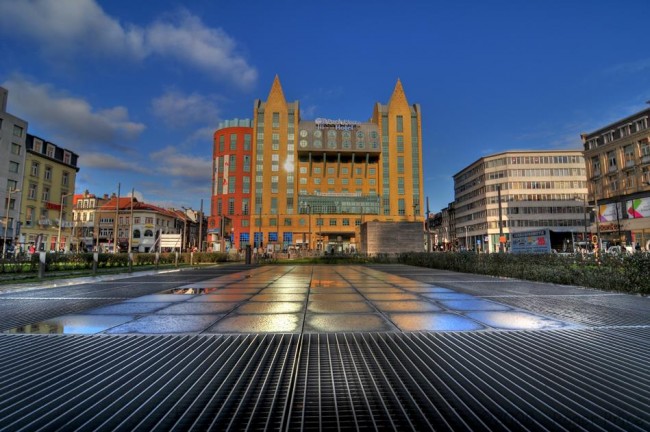 Aesthetically ugly and situated in a seedy part of Antwerp, this was designed in 1993 by Michael Graves. If you consider the rather popular idiom which says ‘It’s not what’s on the outside that counts, it’s what’s on the inside,’ then the hotel would seem to succeed in appealing to its customers through its luxurious accommodation. 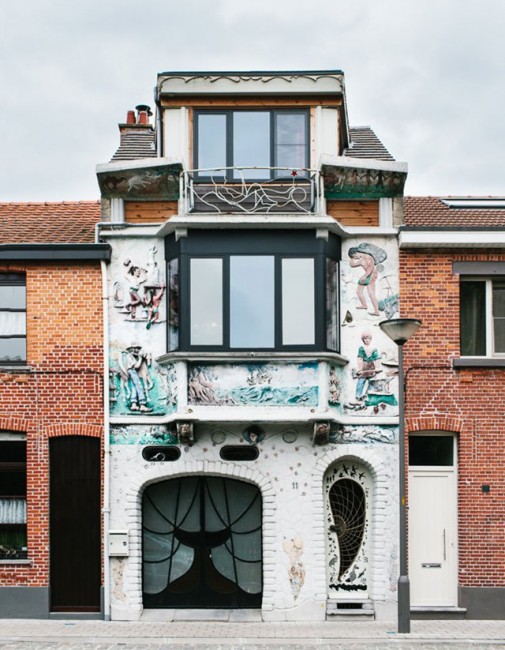 I want to stand out of the crowd

A fusion of styles which boggles the mind: baroque, Art Deco, ancient scenes, and maybe some futuristic touches here and there. Between two common brick houses, such a building would strike anybody, as it hardly corresponds with many peoples’ idea of ‘home sweet home.’ This architectural disaster was spotted by Hannes Coudenys, a Belgian blogger who became famous for his UGLY BELGIAN HOUSES page. Thanks to Ugly Belgian Houses, the poorly conceived edifices in this small country can now be showcased to the world.

If you make a detour around the center of Ghent and drive to its south-eastern districts, lift up your eyes and check out this funny water tower. It was built in 1937 and painted over in 1990 by Ghent artist Chris Demangel. At first, it was even uglier, when it had ice cubes and even a straw painted on it. Nevertheless, today you can just admire these scratched off pinkish-baby blue diamonds that stand above the tiny simple houses. 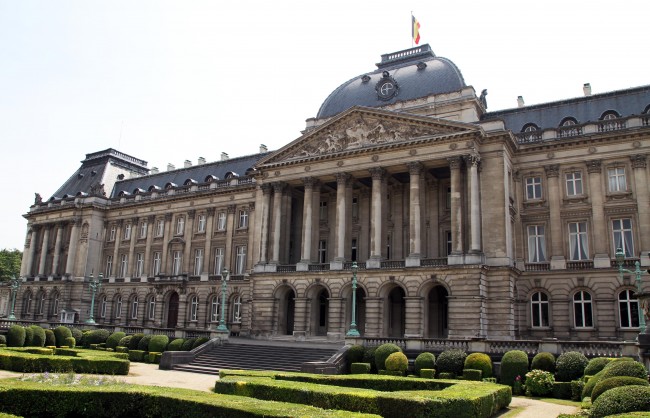 Building, Historical Landmark, Architectural Landmark
The Royal Palace of Brussels, out of 252 buildings, was voted as being the 3rd ugliest building in Belgium. In a contest launched by a renovation company in 2009, one of the most popular selfie-spots in Brussels was close to winning a free demolition. Many Belgians could not come to just one conclusion, as many citizens offered a variety of reasons that ranged from complaints about its size and neglected façade, to its unofficial use as a residence for the King. Completed in 1934 with a neoclassical architectural style, King Albert’s working palace can look like a weary building to some.
More Info
Open In Google Maps
16 Rue Brederode, Bruxelles, Bruxelles, 1000, Belgium
+3225512020
View menu
Visit website
Visit Facebook page
Send an Email
Give us feedback
Give us feedback