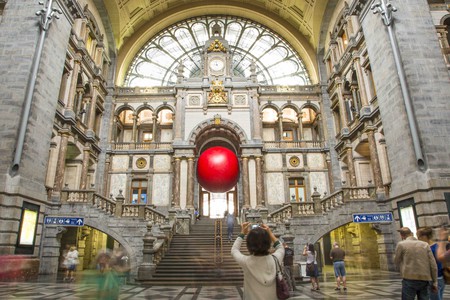 Kurt Perschke’s RedBall Project has made its way to Antwerp for the city’s annual summer festival. The giant inflatable ball, known for showing up in the most random of places across the globe, will be making an appearance in ten distinctive spots across the port city for the next week and a half.

Today’s opening location in Antwerp’s famously beautiful central railway station made for quite the striking image. The ball was hung up underneath the main hall’s clock, creating a stark contrast between the red monster and its historic surroundings. It’s only just a taste of what’s to come. The nine upcoming days will feature the inflatable giant in nine other landmark locations such as the popular MAS museum site, the riverside fortress Het Steen, and the city’s courthouse (nicknamed ‘the butterfly palace’ because of the many ‘wings’ protruding from the top). 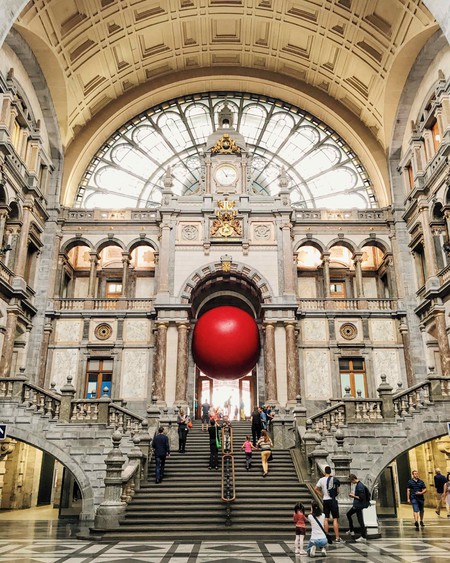 Antwerp’s first sighting of the RedBall, hovering in one of the world’s most beautiful railway stations | © Brit Worgan, courtesy of Zomer van Antwerpen

Though all ten locations have been revealed by the organizing event Zomer van Antwerpen, an element of surprise persists since you never know what position in which you’ll find the work of art. Perschke has been traveling the world with his bright red oversized beach ball for several years now and has made a sport out of blowing it up in the most unlikely of places. In 2012, it got wedged between London’s Millennium Bridge where any passerby could stop to pinch it, and the year after, it floated by the Eiffel Tower on a boat trip on the river Seine. By now, the 15-foot-high mastodon has visited over 25 cities including metropolises such as Barcelona, Sydney, Abu Dhabi, and Taipei, along with smaller Belgian cities such as Leuven (2012) and Mons (2015).

The stories of stunned people bumping into the entertaining and squeezable hulk are infinite, and the Zomer van Antwerpen is hoping to create a lot more by handing over the city to Perschke to play with as he closes out the RedBall’s 2016 season.

An overview of where to spot the unique red ball in the upcoming days: