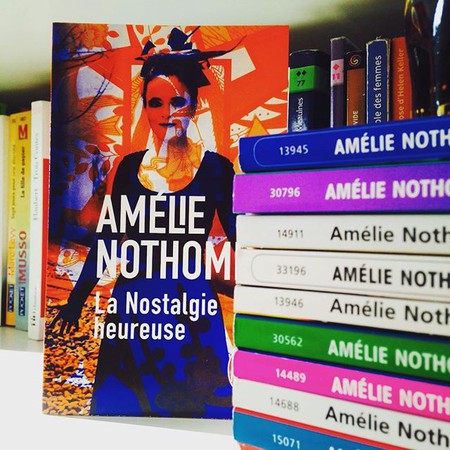 World renowned Belgian novelist Amélie Nothomb was born in Etterbeek on July 9th, 1966 but claims she was born in Japan on August 13th, 1967. As a daughter of diplomats, Nothomb had an extraordinary childhood which influenced many of her novels. While known for her eccentric sense of style (including black wardrobe and large hats), the author is revered for her books, which have been translated into 39 languages. Check out a selection of her 10 most notable novels, each a profound example of Nothomb’s compelling prose and examples of Belgium’s rich literary culture.

The first novel by Nothomb, Hygiène de l’assassin (Hygiene and the Assassin) is written almost entirely in dialogue. The story is about a famous novelist Prétextat Tach who has only two more months to live. Many journalists desire to have the very last interview with him, but all of them fail when asking personal questions about his past. Until there she comes – an unknown journalist who is able to get answers.

The book Stupeur et tremblements (Fear and Trembling) was awarded the Grand Prix du roman de l’Académie française, the same year as it was published. In this autobiographical story, the main character Amélie is a Belgian girl who works within the prestigious company Yumimoto in Japan. Although her career takes a downward turn, Amélie finds a way to survive until her contract expires for just one reason: she does not want to lose face – alluding to the greater cultural hierarchy underlying Japan’s cultural habits in the professional sphere.

The autobiographical novel Ni d’Ève ni d’Adam (Tokyo Fiancée) was the winner of Prix de Flore in 2007. The story tells the tale of Amélie, who travels to Japan to brush up on her language skills and tutor French to students. Rinri is her first student, and throughout their tutoring sessions, the pair begin to develop an attraction toward one another. But rather than setting the foundation for a typical love story, Nothomb decided to write about koi. Koi is a term is used in Japan to describe a sexual relationship without any traps of love.

The novel Cosmétique de l’ennemi (The Enemy’s Cosmetique) is the perfect book for anyone who likes surprising endings. Jérôme Angus meets Textor Texel in an airport. As Texel openly reveals disturbing stories from his past to the chagrin of Angus, the narrative begins to allude to Texel’s disturbed mental state, causing Angus to begin to panic. However, in the end, the story reveals maybe the two are not as different as it appears.

Do you ever reach the ending of a book and ask yourself: why did it have to end this way? Well, the book Mercure (Mercury) seems to alleviate this issue, as it offers two endings to the reader, allowing them to choose the ending they prefer the most. Mercure tells the tale of an old man who detains a pretty girl on an island. Acting as her parental guardian and suitor, once the girl needs healthcare a new character pays a visit to this mysterious island.

There is an ancient Japanese belief that says that every child before the age of three years-old is a god. This cultural reference is used in the novel Métaphysique des tubes (The Character of Rain). Nothomb’s work aims to imagine the world through the eyes of an extraordinary baby at this age.

Based on Nothomb’s experiences abroad as a child, Le Sabotage amoureux takes place in Beijing, and delves into the imaginative world of the children growing up in the area. The game these children create is one based off of war, with different players representing different nationalities. Suddenly, after a new Italian family with a girl named Elena moves to Beijing, Amélie starts a personal fight to gain the love and attention of Elena.

Antichrista is about an unequal friendship between two young girls with different personalities: Blanche is overlooked by everyone and is shy and retiring, while Christa is her opposite, being popular and talented. Christa becomes dominant which begins to annoy Blanche, yet she is not strong enough to reveal this emotion to her friend. Christa even gains the affection of Blanche’s parents, going so far as to take over her bed. Blanche worries that she may lose everything to Christa and she realizes she must overcome her anxiety to get away from her friend, Antichrista.

Biographie de la faim (The Life of Hunger), another autobiographic novel, captures the larger part of Amélie’s childhood and adolescence. Hunger is the main motive throughout the entire book: before reaching the age of 12, Amélie perceives eating – and drinking – as the utmost pleasure, yet as she grows older, she refuses to eat and becomes anorexic. Meanwhile, her relation to food and hunger is influenced by the various environments she lives in: Japan, China, US, Bangladesh and Burma. Closely connected to the theme of hunger, the novel portrays Amélie’s perception of her body developing.

This controversial novel is set in a TV reality show called Concentration, where participants are insulted and beaten by guards. The participants are prisoners in the show and each day two of them are chosen to be killed live on air, as the popularity of the show grows. The book Acide sulfurique (Sulphuric Acid) divides readers in two groups: for and against. Which one will you join?

Book 9 of 2016: Sulphuric Acid by Amelie Northomb 4/5 ☆ This was a tiny Hunger Games-esque book (although was written before that series came out) about a reality TV death camp which the entire population has become obsessed with, spurred on by the media. The concentration style camp is run by guards, who volunteered to take part. It’s a really interesting exploration into the ‘dark side’ of humanity, the individual ‘playing God’ and the obsession with reality TV culture. Truly a fantastic book – my only complaint being that I wish it had been longer, which I suppose itself shows just how good it is! 📚   A photo posted by Emily (@legimus_) on Feb 27, 2016 at 9:32am PST