Ghent's post office and St Nicholas' Church | © Anna & Michal / Flickr
As a merchant city thriving on the cloth trade just as Gothic architecture was all the rage, Ghent still has many masterpieces in the medieval style that have stood the test of time. Start at St Michael’s Church and its bridge smack-dab in the historic core for a walking tour of the town’s Gothic highlights.

Cathedral, Church
St Michael’s Church was originally supposed to get a 134-metre-high (440 feet) tower that would have trumped Antwerp’s Cathedral of Our Lady (the current Gothic record holder of the Low Countries) by eight metres. In the end, funds dried up due to diminished trade, and St Michael’s contented itself with a tower a measly 23 metres (75.5 feet) in size. Instead, the church came to distinguish itself by the remarkably uniform late-Gothic look it maintained despite living through 200 years of construction, during which the Renaissance and Baroque movements became popular in the region. The same can’t be said of Ghent’s City Hall, which you’ll see later.
Looks like it's closed Hours or services may be impacted due to Covid-19
More Info
Open In Google Maps
4 Sint-Michielsplein, Gent, Vlaanderen, 9000, Belgium
+3292342869
View menu
Visit website
Visit Facebook page
Send an Email
Give us feedback

Bridge, Historical Landmark
St. Michael's Bridge | © OliBac / Flickr
Besides being the premier spot from which to admire Ghent’s typical canalside quaintness, St Michael’s Bridge is a model of Gothic architecture unto itself. Architect Louis Cloquet designed the structure in a Neo-Gothic style in 1905 to help it fit in with its more antiquated surroundings, such as the third-oldest building in the city that now houses Uppelink, a jovial hostel for young backpackers, and the 15th-century Great Butchers’ Hall.
More Info
Open In Google Maps
Sint-Michielsplein, Gent, Vlaanderen, 9000, Belgium
View menu
Visit website
Visit Facebook page
Send an Email
Give us feedback

Cathedral, Church
St. Nicholas' Church | Courtesy of Visit Ghent
St Nicholas’ Church is the owner of one of Ghent’s ‘Three Towers’, the trio of Gothic spires that dominate the city’s skyline. Carved out of Tournai bluestone, it sits in the middle (between St Bavo’s Cathedral and the Belfry) as the oldest, built in the 13th century. Besides its noteworthy lantern tower, St Nicholas’ boasts multiple slender turrets, making it a particularly beautiful example of the Scheldt Gothic style popular at the time.
More Info
Open In Google Maps
Cataloniëstraat, Gent Gent, Vlaanderen, 9000, Belgium
+3292342869
View menu
Visit website
Visit Facebook page
Send an Email
Give us feedback

Building
Across the street from St Nicholas, a much smaller but equally eye-catching Gothic masterpiece is visible. The Masons’ Guild built this flamboyant filly to show off their builder chops and entice wealthy merchant clients. It features exceptional stone carvings and is called Den Enghel or ‘the Angel’ in ancient Flemish. Don’t be scared when you find the same building on the Graslei, number 8. You’re not losing your marbles; people thought the original was simply lost for a long time, so Ghent builders planted this replica alongside the scenic canal.
Looks like it's closed Hours or services may be impacted due to Covid-19
More Info
Open In Google Maps
2 Sint-Niklaasstraat, Gent, Vlaanderen, 9000, Belgium
View menu
Visit website
Visit Facebook page
Send an Email
Give us feedback

From one side unapologetically Gothic to the other adhering to a subdued Renaissance style, it’s as if Ghent’s Town Hall is composed of two separate buildings. The reason for the mayor’s seat’s architectural craziness is the time that it took to erect. While builders completed the late Gothic part in the first half of the 16th century, construction on the Renaissance wing only started over 50 years later. Confounding façade aside, the Town Hall’s Wedding Chapel, with its stained-glass windows, is one of Ghent’s most romantic locals. 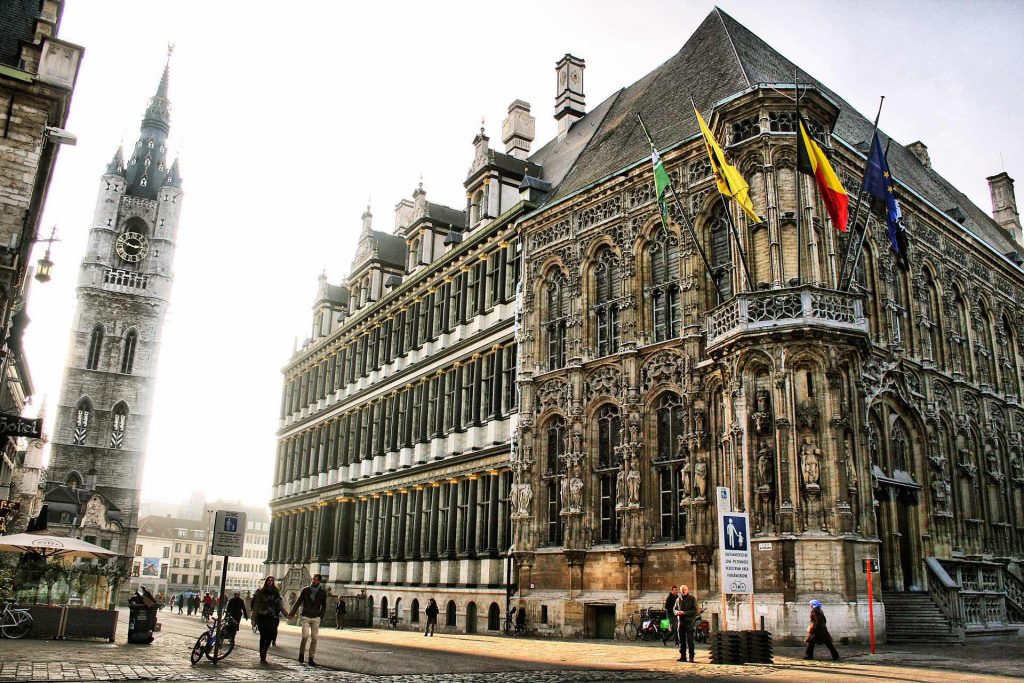 Building
This enchanting corner building on the Vrijdagmarkt square is named ‘Toreken’ (little tower) for its landmark Gothic turret. In the Middle Ages, its most prominent function was as a guild house for the city’s tanners, and today, the fairytale venue quite fittingly houses a centre for Dutch-language poetry. Look to the top of the singular tower to see Melusine, a golden weather vane in the form of a mermaid who watches over the square.
Looks like it's closed Hours or services may be impacted due to Covid-19
More Info
Open In Google Maps
33 Vrijdagmarkt, Gent, Vlaanderen, 9000, Belgium
View menu
Visit website
Visit Facebook page
Send an Email
Give us feedback

Food Court, Market, Restaurant, Belgian, $$$
Ghent only recently joined the ranks of European cities with impressive food halls (think of Rotterdam’s Markthal or Barcelona’s La Boqueria), but it’s a good thing that the city, which is known for its environmentally conscious foodies, has taken the time to find a glorious location. The result is the fresh-faced Holy Food Market, located inside the renovated 16th-century Baudelo Chapel. Around 16 booths serve up international dishes ranging from oysters paired with champagne to everything avocado in this late Gothic temple flooded with marble and white-washed walls.
Looks like it's closed Hours or services may be impacted due to Covid-19
More Info
Open In Google Maps
15 Beverhoutplein, Gent, Vlaanderen, 9000, Belgium
View menu
Visit website
Visit Facebook page
Send an Email
Give us feedback

Cathedral, Church
St Bavo's Cathedral | Courtesy of Visit Ghent
Incredibly rich in religious art treasure, St Bavo’s Cathedral is most famous for housing what is considered the original Renaissance masterpiece: Jan and Hubert Van Eyck’s The Adoration of the Mystic Lamb, also known simply as The Ghent Altarpiece. Other precious canvasses by Rubens among others join the work, but the Romanesque-turned-Brabant Gothic cathedral would be worth a visit for its soaring arches and vaulted ceilings alone.
More Info
Open In Google Maps
Sint-Baafsplein, Gent, Vlaanderen, 9000, Belgium
+3292692045
View menu
Visit website
Visit Facebook page
Send an Email
Give us feedback

The Weavers’ Chapel is a 14th-century Gothic pearl that usually goes unnoticed except for pleasantly surprised furniture shoppers headed for a visit to Bolia. The flagship store of the Danish designer only recently set up shop inside the former chapel of Ghent’s wool weavers, where the guild took care of its old and its sick. The barrel-vaulted ceiling and remaining grandeur of this forgotten monument are worth a stop, even if you’re not in the market for Scandinavian design.