A Literary Tour Of Brussels, Belgium

Some of the greatest writers throughout history have called Brussels home, and many of their works were influenced by their time spent in the Belgian capital. Though you can’t travel back in time, you can still visit the roads where several of these great writers roamed, many of which have remained essentially unchanged. Discover these spots that showcase Brussels’ rich literary history.

Think about some of the famous authors that have lived in Brussels. How many come to mind? Although Brussels is internationally famed mainly for its comic books, the capital city of Belgium also has a rich literary history. Literary visitors were especially prominent in the 19th century, with the likes of Alexandre Dumas, Lord Byron, Charlotte and Emily Brontë, Honoré de Balzac, Paul Verlaine and Arthur Rimbaud, Victor Hugo, Baudelaire and Karl Marx.

In fact, after the revolution, Belgium established a very liberal constitution, and many persecuted writers chose Brussels as their place of solace. In an attempt to flee their home countries, where their social ideas displeased the government, eminent authors and thinkers sought refuge in Brussels.

Where in Brussels can you spot some of the city’s countless literary landmarks? Read on to find a pick of literary places in Brussels every book lover should visit.

On August 25th, 1830, La Muette de Portici, by Daniel Auber, was playing at the Théâtre de la Monnaie, as part of Dutch King William I’s three-day festival in honor of the 15th year of his reign. Loosely based on the uprising of Masaniello, the leader of the revolt against Spanish rule in Naples in 1647, the story inspired the spectators with its nationalistic views. Already displeased with the Dutch domination, the Belgians needed very little convincing to overturn the current ruling party. The theatergoers rose, and while shouting ‘Aux armes, aux armes,’ left the theater. Shortly after, riots broke out in the streets and uprisings followed in the country. A couple of months later, the Kingdom of Belgium was established.

This obviously oversimplified version of the Belgian revolution goes to show that literature has always played a major role in this country, and the rich literary history of its capital city, Brussels, is certainly of no less importance.

The Brontë’s Brussels Or What Remains of It

In 1842, Charlotte and Emily Brontë traveled to Brussels to study at the Pensionnat Heger, a school for young ladies, on Rue Isabelle, not far from the Rue Royale. Two of Charlotte’s novels, Villette (1853) and The Professor (1857), are based on her time as a student and teacher in Brussels. The Brontë sisters’ professor, Constantin Heger, immediately spotted Charlotte’s talent for writing and strongly encouraged her to continue fostering her talent, but she misinterpreted his attention and ended up falling in love with her Belgian professor. Mr. Heger, who was happily married, refused any sort of involvement with his young pupil. This story echoes the plot of her novel Villette, about a young woman with an unrequited love for her Belgian teacher. 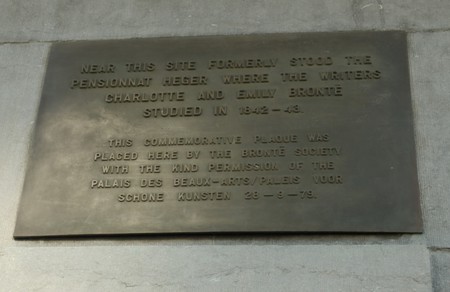 But venture to the end of what remains of Rue Terarken, just a few steps away from where the Pensionnat stood. At the end of this cul-de-sac, after walking under a short gallery, you will spot a tiny blue plaque between two delivery back doors of the Bozar that is dedicated to the Brontë sisters. This ‘secret’ plaque was placed there by a couple of Brontë fans who felt that the official brass plaque was not enough. Apparently, this was done without the official permission from the Brussels Commune, so go see it, but don’t tell anyone about it!

If you feel like delving deeper into the life of the Brontë sisters during their Brussels stay, get in touch with The Brussels Brontë Group, as they organize meetings and events in Brussels throughout the year, such as talks and guided tours, and have a reading group that meets regularly.

Considered one of the greatest and best-known French writers, Victor Hugo lived a total of six years in Brussels while contesting the French political system. He finished writing his masterpiece Les Misérables in Waterloo, 25 kilometers from Brussels. During his stay in the Belgian capital, Hugo changed houses numerous times before settling down with his family in Saint Josse, at number 4, Place des Barricades, near Place Madou. Today, a commemorative plaque reminds visitors of the presence of the famed writer, bearing his signature and the words: ‘Je me sens le frère de tous les hommes et l’hote de tous les peuples.’ (I feel myself the brother of all men and the guest of all peoples.) 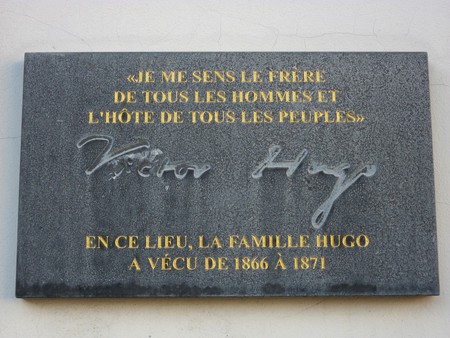 When he moved to Brussels, Hugo was not only accompanied by his family, but also by his mistress, Juliette Drouet. This French actress, who dedicated her entire life to the French writer, followed the writer everywhere and set up her house at 11 Galeries des Princes, in the Galeries Royales de St Hubert, where Hugo would visit her every day. What an appropriate coincidence that these premises now host the magnificent bookstore Tropismes, where Hugo’s masterpieces can now be purchased.

If you want to follow in the footsteps of Hugo and discover his Brussels, you can also buy a walking map produced by VisitBrussels, the capital city’s agency for tourism, and find out for yourself what the trendy restaurant Belga Queen and Hugo have in common.

Crime Scene by the Grand Place: Rimbaud and Verlaine’s Break-Up

The Belgian story of French poets Paul Verlaine and Arthur Rimbaud somewhat begins near the Grand Place, ending near Gare du Midi, and finally leading us to a Mons prison where the incarcerated Verlaine wrote most of his masterpieces.

In true literary fashion, the lives of Verlaine and Rimbaud were consumed by a torrid love affair – their rather liberal use of absinthe and hashish did not help these two keep a level head when trying to resolve their amorous issues.

The infamous ‘drame de Bruxelles’ took place at 1 Rue de Brasseurs, where the hotel A la Ville de Courtrai once stood, on July 10th, 1873. After several arguments and drinks, Rimbaud informed Verlaine of his intention to end their tumultuous three-year relationship. Paul Verlaine, furious and heartbroken, locked Rimbaud in their hotel room, pulled out a gun and shot Rimbaud in the wrist. A plaque can be seen today, commemorating the shooting, on the façade of the building that replaced the A la Ville de Courtrai hotel. 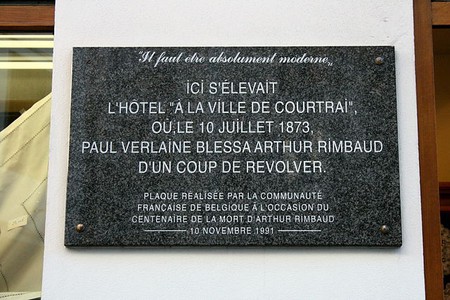 Overcome with guilt, Paul Verlaine accompanied Arthur Rimbaud to the nearby Hôpital Saint Jean, which was later replaced by the present Passage 44 (where Baudelaire himself had been treated several years earlier).

Rimbaud did not file a complaint against Verlaine but was nonetheless determined to return to Paris. Verlaine unwillingly accompanied Rimbaud to the Gare du Midi, but upon reaching Place Rouppe, Verlaine reached for his gun again. Scared by this second outburst of rage, Rimbaud ran to find a policeman and finally decided to press charges. Verlaine was taken to the police station at the Rue de Poincon. Despite Rimbaud’s attempts to withdraw his charges and to testify on Verlaine’s behalf, the latter was convicted for assault and sentenced to two years in prison, part of which he spent at the prison that once stood where the current Hotel Amigo stands.

For over a century, following the decision of the Belgian judicial administration, the Rimbaud-Verlaine case file remained undisclosed and inaccessible. Only in 2004, on the occasion of Rimbaud’s 150th birthday, the police report was made accessible. Portions of this report, as well as Rimbaud’s letters to Verlaine, are kept in the Archives of the City of Brussels as well as in the Bibliothèque Royale Albert I.

The Attraction of the Ilot-Sacré: Galeries de Saint Hubert and its Surroundings

The area of the Galeries de Saint Hubert, and of the Ilot Sacré in general, has always attracted many literary figures. 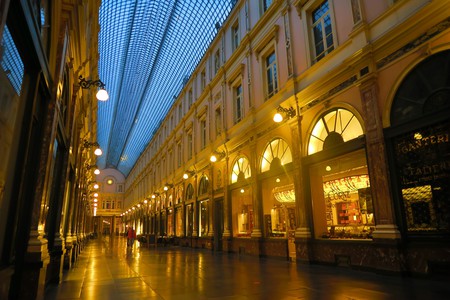 The beautiful Galeries de Saint Hubert around which where many artists, writers and thinkers lived | © WikiCommons

Famed author of Les Fleurs du Mal, Charles Baudelaire fled to Brussels to escape his creditors and lived at the Hotel du Grand Miroir (currently the Maison des Notaires since 2014) on 28 Rue de la Montagne between 1864-1866 and was later treated at the aforementioned Hôpital Saint Jean when he suffered a massive stroke.

Karl Marx, in 1845, settled in Brussels and was often seen at de Maison du Cygne, at 9 Grand Place, where he held meetings of the Communist League with Engels and where it is believed he completed The Communist Manifesto. 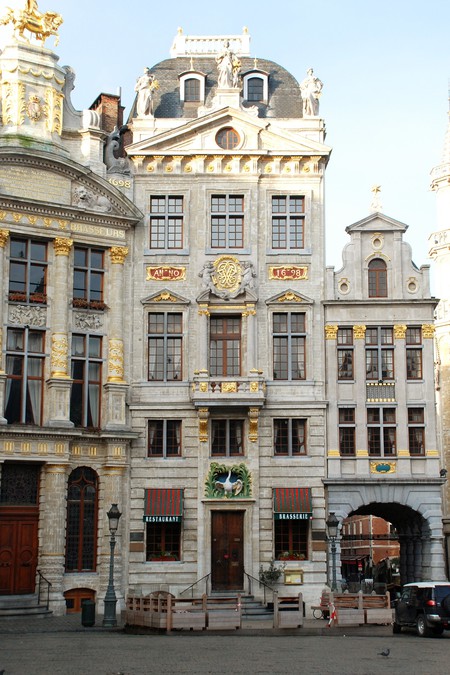 Tolstoy rented a room for a month in the hotel Au Neuf Provinces by the Rue Neuve, and Lord Byron stayed for a couple of days at a hotel on Rue Ducale, in 1861, after having left his home country forever. A plaque commemorating Byron’s stay can be seen at 51 Rue Ducale.

A Haven for Persecuted Writers: From Past to Present

Founded in 2004, Passa Porta is Brussels’ international house of literature, proposing a rich calendar of literary encounters, creative projects for authors and translators, but most importantly the international ‘Victor Hugo Project’, a program joining a large network of cities that help exiled or persecuted writers.

The City of Brussels has already provided accommodation for Serbian writer Dejan Anastasijevic, Russian novelist Boris Korkmazov and most recently Moroccan author Ali Amar, who fled his country further to the banning of his book, deemed too critical of King Mohammed VI.

All types of literature lovers, authors, readers, translators and cultural mediators can meet and work here. Passa Porta also organizes the biennial Passa Porta Festival, one of the most prestigious literary festivals in Europe.

Your Turn to Take a Tour

Whether you are traveling to Brussels or just passing through, the city’s literary past has been well preserved, and there are so many places of literary significance to stumble upon. These hidden little gems, halfway hidden at times in the most random spots, belonging to the Brussels literary past mingle harmoniously with the present, making the city an ideal location for a literary tour.

Hopefully, this article has inspired you to go out and concoct your own tour that will have you walking in the footsteps of some of your favorite poets, authors and playwrights. So grab a map and create your own list of Brussels literary haunts to visit.