Belgium’s second biggest city holds a particular allure to the country’s creatives as well as travelers craving a stylish getaway. To find out what makes Antwerp so magical, here is a list of ten reasons.

It’s Belgium’s one and only capital of cool

Hip, artistic types have been flocking to Antwerp like bees to honey for the past couple of decades. Part of its attraction is the abundance of hip coffee bars, authentic vinyl record shops with knowledgeable owners, and secondhand clothing stores, but Antwerp does more than hit the hipster trifecta. Its earnest dedication to art and design shines through in its galleries, museums, and daring architectural projects. 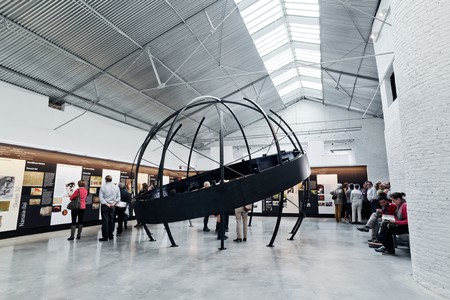 At least that’s how Bobbejaan Schoepen puts it in his hit song ‘De lichtjes van de Schelde’ or ‘The lights of the Scheldt.’ The Flemish singing icon knew one essential truth about Antwerp: to understand and appreciate the city, you must know about its aquatic artery. It was thanks to the river Scheldt (or ‘Schelde’ in Dutch) that Antwerp was able to blossom into one of the most powerful European hubs of the 15th and 16th century. Today, besides providing a waterway for the second largest port on the continent, the Scheldt brings romance to lovebirds admiring the ships’ twinkling lights, hosts pop-up summer beaches on its docks, and reflects the fireworks that traditionally ring in the new year for a bunch of hopeful Antwerpenaars. 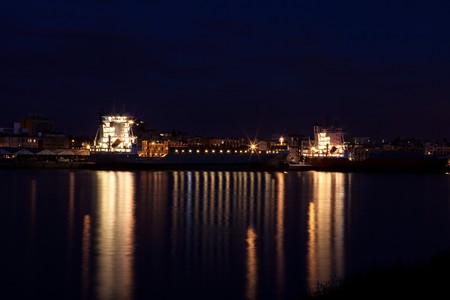 The Scheldt at night | © August Bril/Flickr 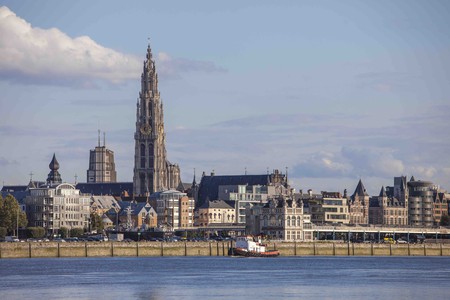 Looking up ‘gentrification’ in the dictionary, you might come across a picture of Antwerp’s formerly abandoned dockside district, Het Eilandje. In the past five to six years, the neighborhood’s rusty warehouses and grubby maritime equipment shops have made room for fascinating museums, artist ateliers, and hip coffee bars. Catalyst of duty has been the MAS or ‘Museum by the Stream.’ Detailing the city’s love affair with the North Atlantic, the monumental structure in red sandstone stands proudly in a large water basin, surrounded by ships, its stretched-out windows resembling waves. The museum reflects how a well-timed, well-designed project can rejuvenate a forgotten area.

Its bold buildings are invigorating the public space

There’s a lot more where the MAS came from – Antwerp is bursting with creative approaches to the public space, from the Palace of Justice with its eye-catching spiked roof (designed by Richard ‘Centre Pompidou’ Rogers) to the remarkable Port House by Zaha Hadid, the newest jewel in the city’s crown. Meanwhile, the awe-inspiring Central Station has combined stone, steel, and glass to form a century-old monumental landmark often described as one of the most beautiful railway stations in the world. 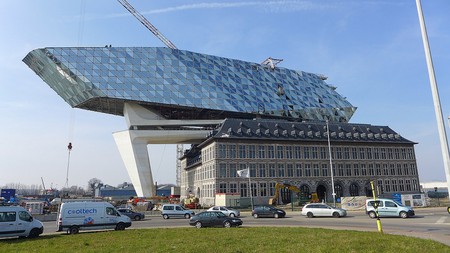 Just take a stroll down the Cogels-Osylei, an ornate residential street in the Zurenborg district brimming with nothing but mansions. Hardly a cohesive whole, styles swing from Art Nouveau to Neoclassical to Greek Revival and many others. In the heart of the city, you’ll find a historic core that’s managed to survive despite severe Nazi bombings during the Second World War. The Grote Markt, with the 16th-century City Hall and guild houses, the Gothic Cathedral of Our Lady, and the medieval fortress Het Steen are all located within walking distance of each other. Throw in the Plantin-Moretus early publishing house (keeper of the world’s first printing press) and Renaissance Master Peter Paul Rubens’ home atelier, and you’ve got a history buff’s wildest dream come true. 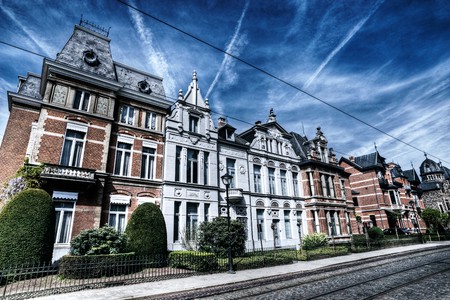 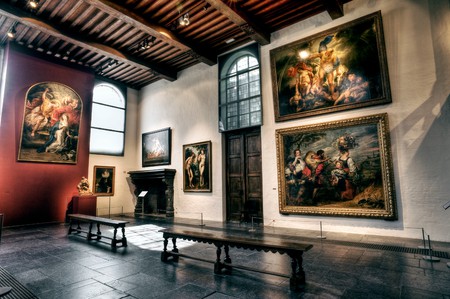 That includes picturesque squares and terraces

Cobblestones, a smattering of trees and benches, and a host of pretty buildings surrounding everything – Antwerp is dotted with squares adhering to the magical recipe. On the Dageraadplaats and Draakplaats, restaurants and cafés host laid-back afternoons and evenings with friends, while the Stadswaag and Melkmarkt are primed for a party. The snug Handschoenmarkt is watched over by the city’s magnificent cathedral, and the city’s heritage library does the same for the tranquil Hendrik Conscienceplein. 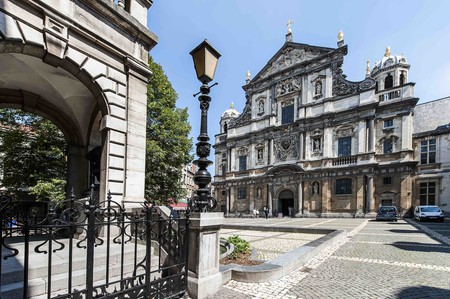 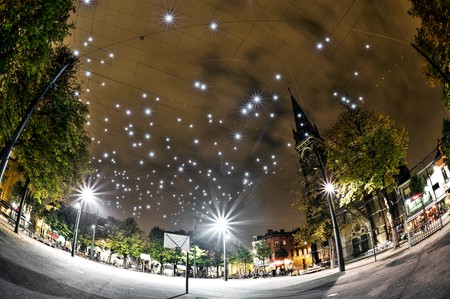 Lovers of the black gold will be excited to know that Antwerp stocks the single largest supply of coffee beans in the world. This fact is reflected in the smorgasbord of coffee bars that are sprinkled all around. Some, like Normo and Caffènation, take pride in roasting their own beans, while others, such as Maurice Coffee & Knits and Buchbar, simply aim to create a charming environment in which to sip your daily cup of joe. 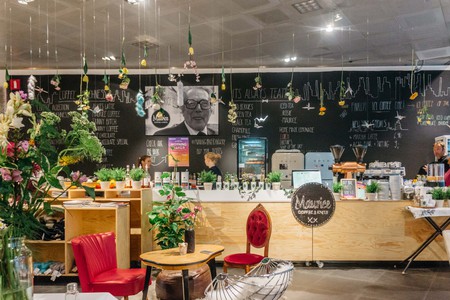 Many cities can’t hold a candle to its fashion boutiques

The streets of Antwerp are filled with people thinking long and hard about their sense of style. Ever since six graduates from Antwerp’s Royal Academy of Fine Arts shook London’s 1986 Fashion Week to the core, the city has strived to stay one step ahead. Driven by the presence of smart boutiques such as Enes, Graanmarkt 13, and Step by Step, and the flagship stores of the Avant-Garde designer troupe now referred to in books as ‘the Antwerp Six’ (including Dries van Noten, Ann Demeulemeester, and Walter van Beirendonck), the city maintains its status as a renowned designer haven. Discover the legacy at fashion museum MoMu, and then head to the chic Schuttershofstraat and the edgy Nationalestraat to put together your own Antwerp-inspired outfit. 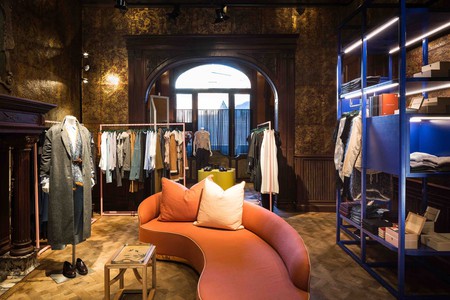 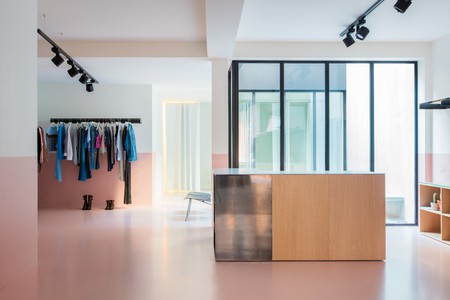 Folklore is all around

Antwerpenaars are famous for taking immense pride in their hometown, and that pride is often strengthened by legends that have been told for centuries to give the city’s history an epic touch. For starters, Antwerp is rumored to owe its name to the way the brave Roman soldier Brabo rid the place of Antigoon, a cruel giant who cut off the hands of sailors that refused to pay a toll. Brabo paid him back in kind by severing Antigoon’s hand and throwing it into the Scheldt – hence the Dutch name ‘Antwerpen’ to resemble the words ‘hand werpen’ (throwing a hand). A grand statue in front of City Hall celebrates the glorious moment of the giant’s demise. Another mythical figure and housemate of Antigoon, the water ghoul Lange Wapper, can be found at Het Steen. 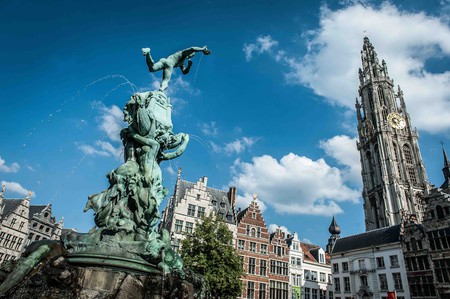 Its summers are teeming with artistic events

Always a vibrant cultural hub, Antwerp traditionally pulls out all the stops for the warmest season. For two months, the citywide Summer of Antwerp festival puts up a free outdoor cinema, creates pop-up beaches and bars, turns abandoned gas factories into urban dance halls, and essentially transforms the entire city into an artistic playground in which everyone is invited to participate. 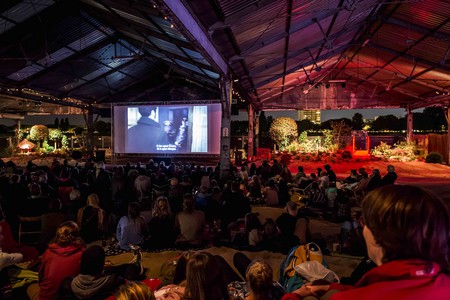