What Does Santa Claus Look Like Around the World? 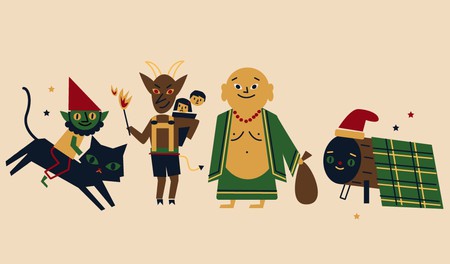 Whether you’ve been naughty or nice this year, the way Saint Nick will appear varies greatly. Santa Claus comes in all shapes and sizes around the world. From a log that poops to sinister beginnings, there’s much more to Santa than meets the jolly.

Krampus has become a worldwide celebrity thanks to the 2015 American Christmas-themed horror film starring the half goat, half demon. But the concept of Krampus has been accompanying Saint Nicholas since the 17th century, and his menacing appearance is thought to have pagan origins dating back even further.

Krampus’ usual stomping grounds stretch from Germany to Austria and even into parts of Italy. His gnarly hooves, long tongue, and hairy body bound by chains with bells have been seen on greeting cards and in the nightmares of children at Christmastime for centuries. Krampus deals with naughtiness, so be good for goodness sake—or else. 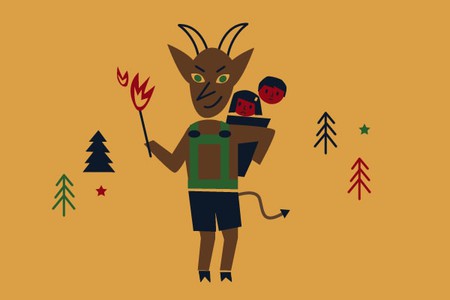 La Befana, the Italian Christmas witch, is Halloween and Santa all in one. Her common witch-like features are deceiving. She’s actually a good housekeeper turned nice witch, and her story goes back to the time of Jesus Christ’s birth.

Befana delivers candy and presents to well-behaved children the night of January 5. She also sweeps away the dust and problems of the previous year before taking off again on her broomstick. Of course, in return, she gets wine. It’s Italy, after all.

There’s something about that Santa belly in Japan, though

Global Saint Nick coincidentally resembles one of Japan’s seven lucky gods in more ways than a bulging tummy. Hotei, meaning “a cloth sack,” is the portly, half-dressed guardian of children (among other things) in Japanese culture. He wears a grin and carries a bag just like other Santa Clauses, but Hotei’s sack contains much more than toys; it’s believed to be full of fortunes, or possibly even weighted by the world’s woes. 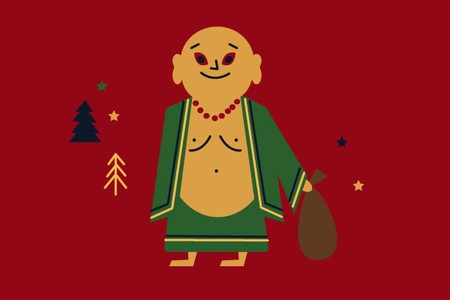 While the mass-produced image of Santa Claus has been heavily influenced by vintage Coca-Cola ads, at one time Christianity shaped many of the world’s Christmassy customs. Finland’s Santa is kind of a combination of both.

Much like Krampus, the Joulupukki, or Yule Goat, is rooted in paganism and had a sinister reputation. Historically, men took on the role of dressing up as goats, representing evil spirits who went door to door demanding food from the Christmas feast.

These 13 feisty little tricksters from Icelandic folklore are known to play pranks on unsuspecting families for 13 nights leading up to Christmas. Each is named after the particular type of mischief they bring, which ranges from door slamming and spoon licking to sausage swiping. They also leave small gifts, usually placed near or inside shoes.

The Yule Lads are often seen roaming with their cat, who delights in eating naughty children—because the origin of any good holiday tradition apparently has to have a way of dealing with children who misbehave. Also, watch out for Window-Peeper—perhaps the nastiest of the Yule Lads. 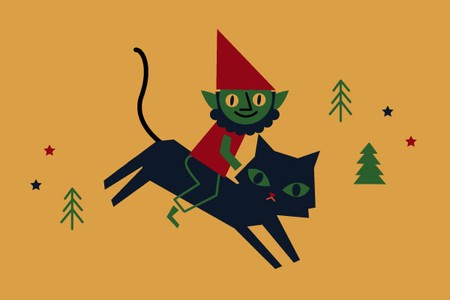 It takes two to tango at Christmas in Liberia

Christmas in Liberia is a cultural fusion. Picture a more westernized version of Santa and a person playing the part of a raggedy old beggar strutting his stuff to the beat of African drums. The dancing duo sway their way up and down streets, bringing merriment to crowds in exchange for small gifts or money. That’s right. Christmas is on you in Liberia.

Although international influence has jingled its way into Liberia’s holiday rituals, Old Man Beggar represents a very vibrant part of Liberian culture. The character comes from Liberia’s dancing “bush” devils and is sometimes customarily portrayed larger than life on stilts or layered in tattered attire and straw.

Time for a big, festive dump in Spain

Northeastern Spain’s Catalonia region might have one of the wackiest ways to receive gifts from a Santa of sorts. It’s a norm to beat a hollowed-out Christmas log, Tió de Nadal, with sticks until it, well, poops out the goods. There’s even a song about poo to sing while whacking the log!

From December 8 until Christmas Eve, kids feed and care for a log that has sticks for legs, a painted on face and a red hat, so it unloads piles of presents. A large blanket is wrapped around the log to keep it warm, or, in other words, to hide what the log will defecate. 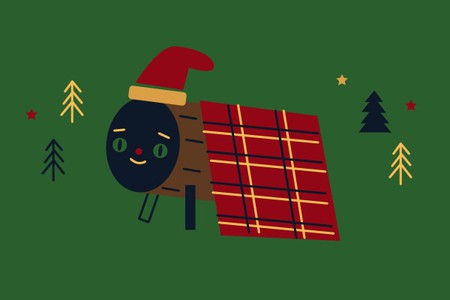