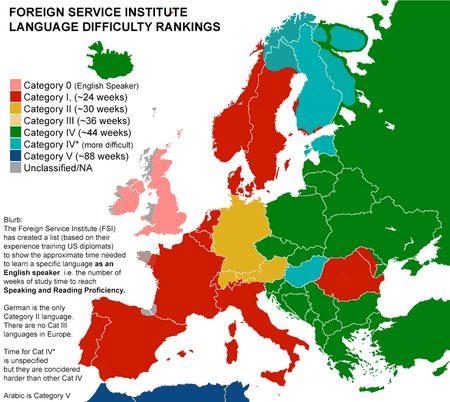 If you’re not lucky enough to be blessed with bilinguality, learning a new language can be tough.

Tenses, prefixes, grammar – there’s just no end to the things you can mess up while trying to construct a simple sentence.

You shouldn’t let that overcome you, however. Learning another language, while hard, should be celebrated.

But if you’re on the lookout for a new language to learn, where do you get your inspiration from? You want a tongue that’s useful and beautiful without being too tricky to master.

These maps may be the answer.

Using information released by the Foreign Service Institute (FSI), a US State Department, Reddit user Fummy devised a ranking order of the easiest and most difficult languages to learn. Fummy then created a map of Europe and a worldwide map (with different colour-coding for each), and posted them on the social networking site.

The information provided by the FSI was based on the department’s experience of training US diplomats in foreign languages for their stations abroad. Working from this, the Reddit map shows the approximate time needed for an English speaker to reach speaking and reading proficiency in any given language. Based on the number of weeks and hours of study needed to achieve this goal, the ranking ranges from Category I (24 weeks/600 class hours) to Category V (88 weeks/2,2000 class hours). 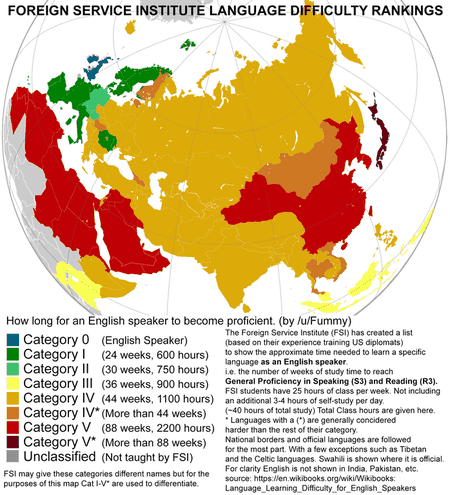 A map of language difficulty around the world | © u/Fummy / Reddit

A lot depends on a person’s natural language-learning ability, motivation, quality of instruction and the level of language proficiency they wish to attain. If you just want to order a beer, that probably won’t take too long to master. Giving a business presentation, however, will take a little longer.

French, Spanish, Portuguese, Italian and Norwegian are among those classed as Category I, the easiest to learn. German receives a Category II classification (30 weeks/750 class hours), which Reddit users speculate is due to the language’s unfamiliar grammar structures compared to the ‘Romance languages’ (Spanish, Portuguese, French, Italian, Romanian, and Catalan).

Finnish and Hungarian are classed as Category IV, and would take an average learner 44 weeks (1,100 class hours) to become moderately fluent in. 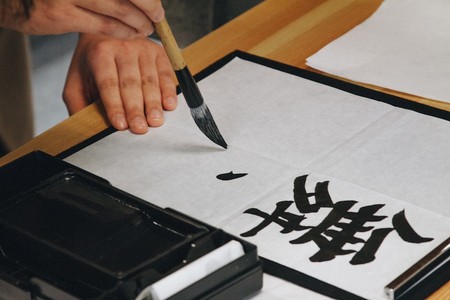 Learning a new language can be tough | © Niketh Vellanki / Unsplash

Russian and most Middle Eastern languages also get a Category IV rating.

Chinese is thought to be learnable in 88 weeks (2,200 class hours) and Japan is the hardest, with the highest rating of Category V, more than 88 weeks.

The maps are an inspiration to those who want to master a tongue other than English. We’d better get cracking!