From her candid early work on New England’s Carnival Strippers to her coverage of combat training in Louisiana’s Fort Polk, American photographer and filmmaker Susan Meiselas invites the viewer to give much more than just one look. Thus far the pinnacle of her work was her stellar documentation of the Nicaraguan insurrection, summarized in her iconic Molotov Man. 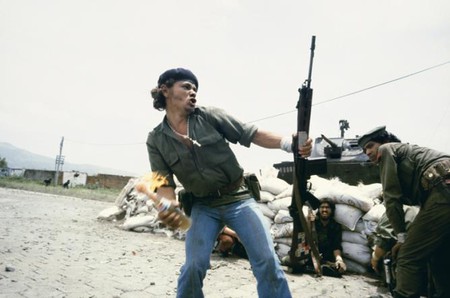 When Harvard-graduate, public school photography teacher Susan Meiselas visited Nicaragua in 1978, she couldn’t help but notice a feeling of anticipation in the air, as people were getting more and more ready to take their fate in their hands. The Sandinista National Liberation Front (FSLN) and their supporters would, within the next year, bring Somoza’s dictatorship to a violent end and Meiselas was there to bravely document, through her lens, part of the action.

From the everyday realities of the Somoza regime all the way to her iconic photograph of the Molotov Man — the fiery last goodbye to dictatorship and a lasting, worldwide symbol of the Sandinista revolution — her work traveled the globe and won her the coveted Robert Capa Gold Medal for ‘outstanding courage and reporting’ (1978). 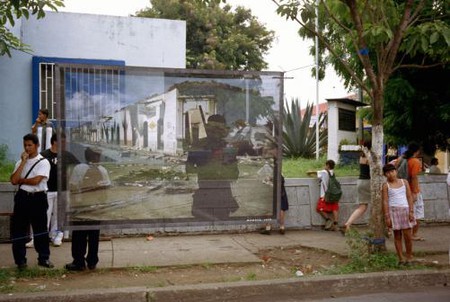 To Meiselas herself, however, there was something still missing. In the words of the photographer; “I spent six weeks there principally, because all I could feel was that I wasn’t doing anything that gave a feeling for what in fact was going on there. Not going on in the world of events, but going on in terms of how people were feeling… I’m really interested in how things come about and not just in the surface of what it is”. For someone claiming she is not your average war correspondent, she has showed an extraordinary dedication to local history.

In 1981 she published 70 photographs from the Sandinista revolution in ‘Nicaragua, June 1978 to July 1979’. And, ten years later, she got involved in a more ambitious project, which revealed her passion for contextualising her vision across different media: the documentary Pictures From a Revolution (1991), which she co-directed, sees the artist revisiting the protagonists of her earlier pictures, capturing their memories and thoughts on a future that the revolution helped materialise. Among them, members of the National Guard, split between the eternal believers and the rebels, some of which later made a 180 degrees turn and joined the Contras — the Sandinista opposition.

Her earlier documentary, Living at Risk: The Story of a Nicaraguan Family (1985) more specifically told the story of the Barrios family, five siblings and Sandinista supporters at the height of the Contra war — a narrative she picked up again, collaboratively with filmmaker Alfred Guzzetti, in 2011’s The Barrios Family 25 Years Later. Meiselas was present throughout, offering her reflections on her own photographs and, through them, on history itself.

Living at Risk: The Story of a Nicaraguan Family preview/ © Documentary Education Resources.

In July 2004 Nicaragua celebrated the 25th anniversary of the overthrow of Somoza and Meiselas was once again there to take part in the action. Nineteen mural-sized images from 1978-9 were displayed, for a month, on public walls and in the open spaces in the towns, at the sites where they were originally made. ‘Reframing History’ made the photographer’s work a priceless part of the collective memory — adamant in their intent to capture, as she has always claimed, true emotions and events, way beyond the surface.