10 Traditional Dishes You Must Try in Nicaragua 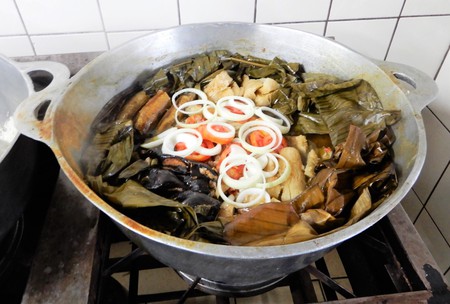 The constant search for ever more authentic flavours in recent years has fuelled a foodie revolution based on farmers markets, food trucks, and an eat-like-a-local philosophy that has also changed the way we travel. As a tourism destination, Nicaragua is not only booming with birdwatchers, surfers, volcano-boarders and culture vultures, but also ticks all the boxes for culinary travellers seeking gastro adventures. Self-confessed foodies are being enticed here by a smorgasboard of delicious traditional dishes to feast on and a host of exotic fruits and vegetables to try. Made from home-grown ingredients and the kind of love you only get in places where the locals are passionate about the food they cook, traditional Nicaraguan dishes can be found at high-end restaurants, hole-in-the-wall eateries, local markets, and street corner grills.

Much more than rice and beans, gallo pinto is a national dish that Nicaraguans can happily eat for breakfast, lunch, and dinner. The name translates as painted rooster, and to live up to its name gallo pinto is typically made of red beans, white rice, and diced onions that are fried together in a large skillet with some of the water that the beans were boiled in to give the mixture a reddish tinge. On the Atlantic coast and Nicaragua’s Caribbean islands the beans, rice, and onions are fried in coconut oil, or with a splash of coconut milk to make them extra creamy. Nicaraguans joke that the country runs on gallo pinto power. 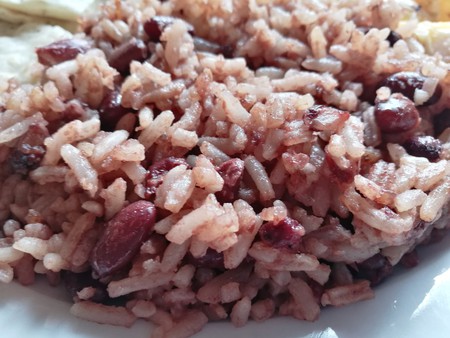 Gallo Pinto is one of the main components of a desayuno típico, a traditional Nicaraguan breakfast, which is loaded with enough energy to fill you up until well past lunch. The full Nica comes with fried eggs, or scrambled eggs cooked with diced onions and bell peppers, fried plantains, a few squares of fried or fresh cheese, a piled up heap of gallo pinto, and a fresh maize tortilla. Typical extras include pico de gallo, a vinegary salsa of finely chopped tomatoes and onions, and a little pot of sour cream, but bacon or blood sausage could also make it onto the plate. Combined with a tropical juice such as pitahaya (dragon fruit) or calala (passion fruit), and a strong local coffee, the desayuno Nica is up there with the best breakfasts in the Americas. 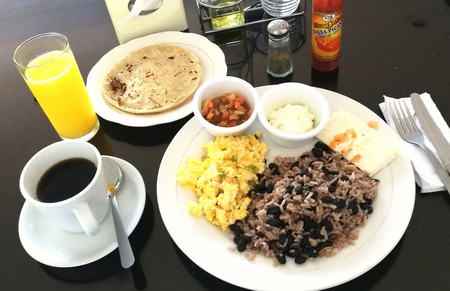 Made from maize dough stuffed with pork, slices of potato, and a sprig of a minty herb called yerba buena, nacatamales are Nicaragua’s version of the Mexican tamal or the Venezuelan hallaca. Nacatamal comes from Nahuatl, the language of the ancient Aztecs, from the root nacatl (meat) and tamalli (something wrapped), as the corn dough is wrapped in a plantain leaf before being boiled. Nicaraguans usually only eat nacatamales for breakfast at the weekend with a coffee, as they are considered too heavy to eat in the evening. While pork and potato are the classic combination for nacatamales, they can be stuffed with whatever comes to hand: chicken, rice, or vegetables. Nacatamales are super tasty, but always remember to take off the plantain leaf before tucking in. 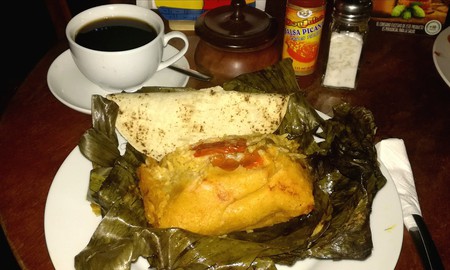 Quesillos are cheesy treats sold from street carts all over the country. They consist of a tortilla wrapped around a circle of homemade white cheese that is smothered with curtido (finely chopped pickled onion) and a generous dollop of crema (cream). They are either served wrapped up in a plastic bag (so you can eat them without making a mess) or flat on a plate. The towns of La Paz Centro and Nagarote – on the road between the cities of Leon and Managua – both insist they produce the best quesillos in Nicaragua. Following tradition, add a hearty dash of homemade chile sauce before you tuck in, and accompany your quesillo with a chocolate and maize drink called tiste, which is served in a gourd cup.

The quesillos in Nagarote are famous throughout Nicaragua | © Russell Maddicks / Flickr

A thick soup made of maize dough with shredded beef and onion, Indio Viejo (Old Indian) is a Nicaraguan dish that has its roots in pre-Columbian times. According to legend, a group of hungry Spanish conquistadors arrived in an indigenous village demanding to know what the locals were cooking. “Only an old Indian who died yesterday,” a quick-witted member of the tribe responded. The ruse worked. Shocked at this story of cannibalism, the Spaniards rode off to raid another village, and the whole tribe had a good laugh as they enjoyed the meal of maize that had been cooking over the fire. Indio Viejo gets its slightly sweet flavour from yerba Buena and bitter orange, and is traditionally served with tostones (fried green plantains) and cuajada (curd cheese). 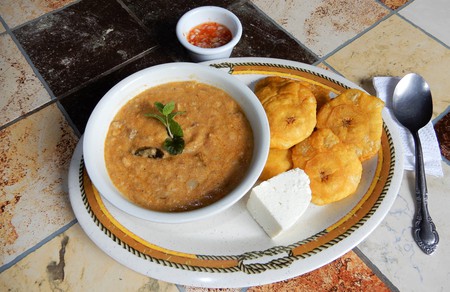 A classic of Creole cooking on the Atlantic coast of Nicaragua, rondón is a one-pot cooking solution for busy fishermen that has become an iconic dish for the whole region. Fish, shrimp, lobster, or any other seafood you can “run down” are added to the pot with root vegetables like yuca (cassava), plantains, potatoes, carrots, bell peppers, chilli peppers, and a fish stock sweetened with coconut milk to create a mouth-watering stew. Rondón can also be made with beef, pork, or turtle meat, but the creamy coconut stock works best with seafood. 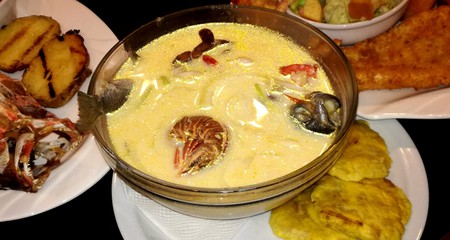 The name of this popular dish comes from the Spanish word vaho, which means mist or steam, and to prepare it chunks of beef, green plantains, mature plantains, yuca (cassava), onions, and peppers are slowly steamed together in a huge cooking pot that is sealed at the top with layers of banana leaves to keep in all the amazing flavours. After spending four to eight hours on a low heat, the ingredients are cooked to perfection and are served on a banana leaf with a topping of vinegary cabbage slaw. Typically eaten at the weekend, baho is said to be an excellent cure for a hangover. 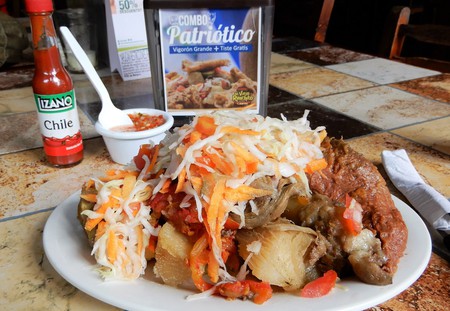 Slightly sweet, slightly salty – and delicious when combined with homemade cuajada (curd cheese) and cream – the güirila (corn pancake) is one of the gastronomic delights of the Nicaraguan countryside. The spelling can put off some non-Spanish speakers, but güirila is easy to pronounce once you hear it. Just ask for a wee-ri-la. According to Nicaraguans, the best güirilas are to be found in the north of the country, in and around Matagalpa and Sebaco, although the people of Chontales, the country’s dairy region, also lay claim to the crown. 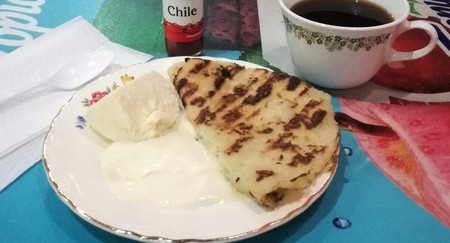 There’s only one place to eat vigorón, and that’s in the historic city of Granada, where the dish was first created in 1914. A mini-mountain of boiled yuca and chicharrones (pork rinds) topped with a chopped cabbage salad that contains slices of mimbro, a sharp-tasting fruit from the cucumber tree, vigorón is sold in Granada by street vendors with nicknames like El Gordito (The Fat Man), La Pelona (The Bald Woman), and La Perla (The Pearl), who all have their loyal, local fans. The key to vigorón’s moreishness is the killer combination of creamy yuca with crispy fried pork and the crunchy freshness of the zingy slaw. 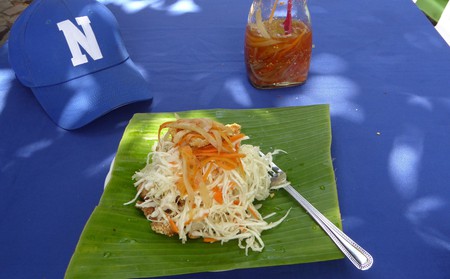 Fried dough balls covered in syrup might not tingle everybody’s taste buds, but in Nicaragua this pan-Latin American staple is made from starchy yuca (cassava) flour, which is mixed with eggs and cheese before being deep fried to create crunchy balls of happiness that are eaten all year round. The syrup is flavoured with cinnamon and poured over the buñuelos while hot, adding a warm sticky sweetness to the salty savouriness of the yucca and cheese balls. Nicaraguans don’t generally eat desserts after a main meal in a restaurant, but a small bowl of buñuelos served with a coffee is probably the exception.

Buñuelos in Granada, Nicaragua | © Russell Maddicks / Flickr
Give us feedback