Haitian Art Emerges From The Rubble 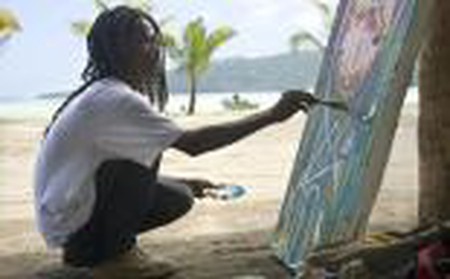 A collective of Haitian artists called KOLAJ are attempting to use their art as a force for good in Haiti: they are setting up educational programs and raising funds to rebuild an arts center destroyed during the 2010 earthquake. 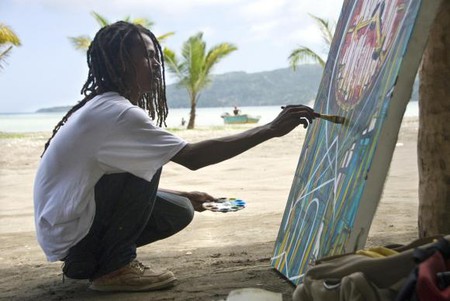 The artist-led movement in Haiti, KOLAJ, is focused on developing sustainable livelihoods for artists and enriching the Haitian community through creative works. Anderson Ambroise, KOLAJ co-director and artist, dedicates much of his time in Haiti to empowering his people through art. KOLAJ is located in Jacmel, a southern coastal city known as Haiti’s cultural centre. There are more artists here than any other city in Haiti, and art is an important part of its identity.

After the January 2010 earthquake, the art center in Jacmel was destroyed. It was then that Ambroise’s path as an artist took a more progressive, altruistic character, and he began to be involved in the formation of KOLAJ. This was done with the belief that, more than ever, artists needed a space where they could paint, run workshops and develop a form of cultural exchange with other artists. For Ambroise, a major part of KOLAJ’s initiatives were about working together in art, sharing experiences and developing a positive collective identity for the future. KOLAJ’s goal is to raise enough money to one day build a new arts center which Haitian artists like Ambroise can use to develop their own art and foster ties within the community of artists in Haiti.

At KOLAJ, the artists construct their pieces out of the resources available to them. Inevitably, rubble and natural objects from their environment are used, reflecting the context behind what they create. A key part of KOLAJ is the workshops they run for children. As Ambroise stated, ‘art is important for children because it is education’. These workshops are valuable because they provide an environment where the youth are empowered to be creative in response to the problems that they face in life.

When asked what KOLAJ is, Ambroise explained that it is far more profound than the simple artistic processes of cut and paste. He explained it as all artists working together to make one goal possible. ‘Different vibrations can be one vibration, and that is KOLAJ for me’, he said. In Ambroise’s opinion, KOLAJ will also help the Jacmel artists by giving them the opportunity to help themselves through art. Ambroise is now living in New York, where he continues to promote the organization and its efforts as well as focusing on his own artistic development and work.