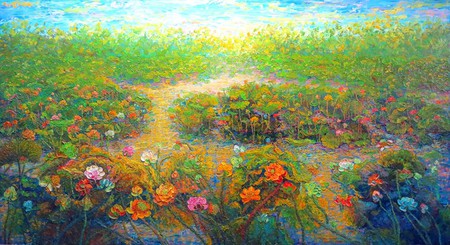 Tuyen Vu (Vietnamese name: Vũ Tuyên) is an artist with a passion for lotus flowers and their symbolic meanings. For him, lotus flowers signify human beings in the cycle of birth, death, and rebirth. The flowers connote the dynamism and happiness of life. Vy Dan Tran met with the artist to discuss his work.

Throughout his career, Tuyen Vu has painted more than 500 paintings of lotus flowers, in addition to other subjects such as landscapes. During my conversation with him, he came across as an energetic, enthusiastic and optimistic painter, who truly loved the beauty of nature and was eager to share his love of life with everyone. His positive attitudes are integrated into his paintings of dynamic composition, vibrant colours and thick textures. 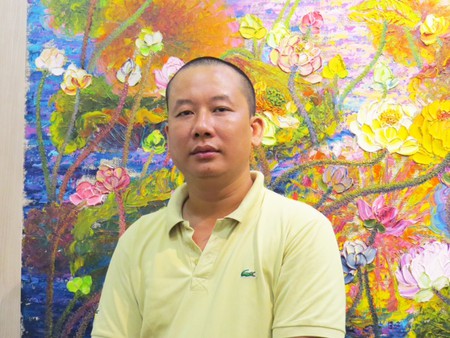 The artist Tuyen Vu | © Tuyen Vu with permission of the artist.

Born in 1977, Tuyen Vu is a contemporary artist based in Hanoi, Vietnam. Having found his passion for art, he began working with ceramics and lacquer then created relief sculptures of lotus flowers. 2013 was a turning point for him, when he discovered the beauty of the sacred flowers and started his career as a professional painter. In July 2014, his first major solo exhibition took place in a prominent art gallery in the centre of Hanoi. Since then, he has had seven or eight other solo exhibitions, sometimes curating them by himself. He also loves writing poems to express his feelings and uses his own verses to introduce his paintings to audiences. His poetic approach towards painting has resulted in an expressive style conveying deeper meanings. 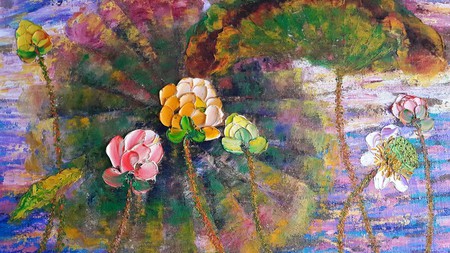 Tuyen Vu’s oil paintings of lotus flowers vary in size, from small canvases to very large ones. His lively flowers never stay true to their natural colours of pink and white. Sometimes they are orange while other times they are blue, depending on the artist’s mood. Most of the time, Tuyen Vu uses a vivid palette to connote happiness and contentment in life. The artist says that he paints intuitively and lets his profound feelings explode into his dynamic works. More than simply performing a physical exercise, he sees painting as a way of meditating. His act of painting represents his escapism of modern life into an ultimate state of tranquility. 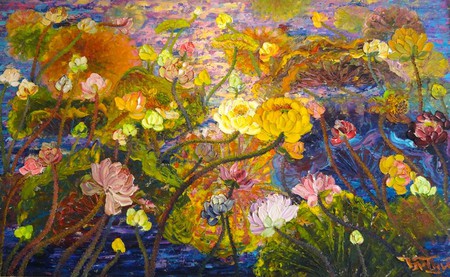 His early canvases are characterized by extravagant composition and elaborate use of both brushes and painting knives. An abundance of lotus flowers are depicted to exuberant effect. The pattern of his background is usually composed of short, horizontal, thick lines, which are juxtaposed with the curvy lotus petals. The general mood of his paintings is uplifting, evoking bliss and the love of life. 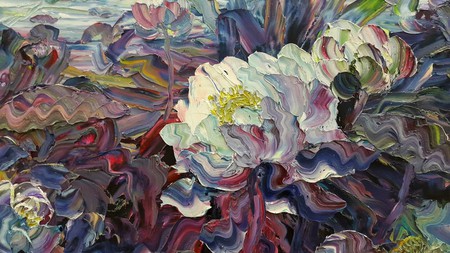 Tuyen Vu, a section of Lotus. Oil on canvas | © Vy Dan Tran with kind permission of the artist.

Being an experimental artist, Tuyen Vu has transformed his style within a course of two to three years. His paintings have become more painterly and his lotus flowers are distorted almost into abstract expressionism. The diverse shapes of his lotus flowers and their thick textures visualize the action of using painting knives to spread blocks of oil paint vigorously. His artistic exploration reflects his constant need to improve upon his own works. 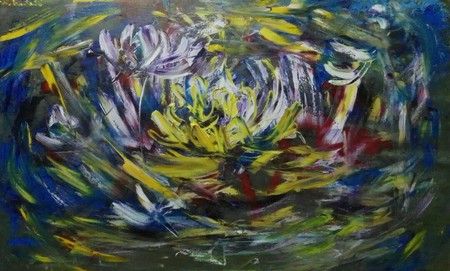 My visit to Tuyen Vu’s studio was a delight to the eyes, as the artist showed me some of his most beloved works. As soon as I stepped inside the studio, I immediately felt great energy from his cornucopia of paintings, which filled every empty space. It was a vibrant place and splashes of colorful oil paint were everywhere, on the floor, on chairs and tables. His studio also had a very soothing atmosphere. As it was in the suburban, it was extremely quiet and close to nature. 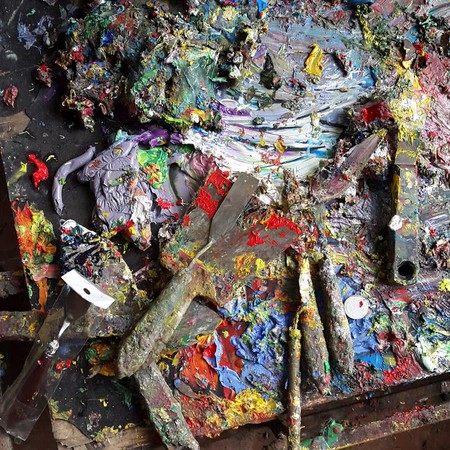 Occasionally colors in Tuyen Vu’s paintings can be meaningful. As Tết (Vietnamese New Year) was approaching, he chose red, yellow and green for his latest work when I visited his studio. Red symbolises luck, yellow signifies wealth, and green alludes to youth. Red and yellow are also the colours of the Vietnamese flag. As it was springtime, Tuyen Vu named the painting The Dancing Towards Summer to suggest what would come after spring. The painting has an overall festive feel. 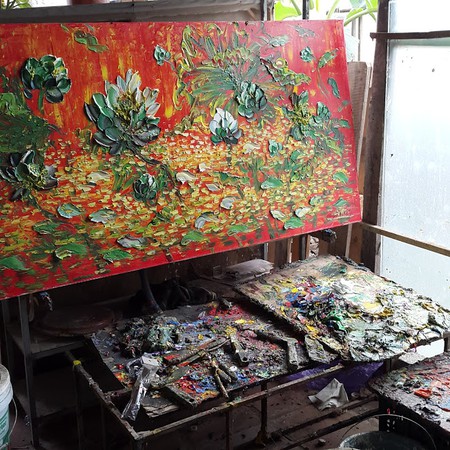 Lotuses have been an inspiration for many generations of Vietnamese writers, poets and especially artists. Not only do they possess an elegant beauty, but they also plays a significant role in Vietnamese culture, suggesting purity and strength. Even though lotus flowers bloom in a muddy environment, they remain uncontaminated. Lotuses are also the national flower of Vietnam and represents Buddhism in this country as well as throughout Asia. 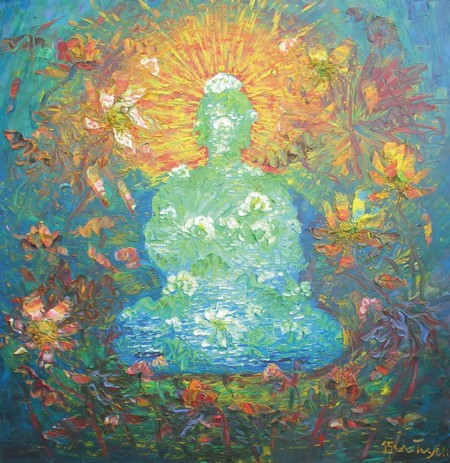 Tuyen Vu perceives the lotus as a sacred plant and deliberately assigns symbolic meanings to his flowers. Each lotus signifies a human being, which constantly interacts with others. The intimacy of his flowers suggests how lotus flowers become strong by protecting and supporting each other. The artist conveys in his paintings an exhortation to follow the way of Buddha by living a righteous life and being content with the present. Good deeds and healthy relationships can lead to enlightenment. 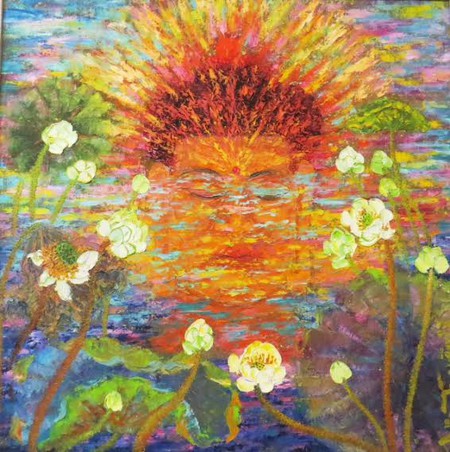 Tuyen Vu, Enlightenment. Oil on canvas | © Tuyen Vu with permission of the artist.

Tuyen Vu hopes his paintings can deliver a message about humanity to his audiences: ‘Life is so wonderful! Why don’t we spread love, kindness and generosity? Let us keep good relationships and create beautiful paintings full of life and humanity.’ The artist is strongly inspired by the religious meanings of lotus flowers in Vietnamese culture. Not only do his canvases depict the magnificence of lotus, but also the artist’s contemplation of spiritual life.