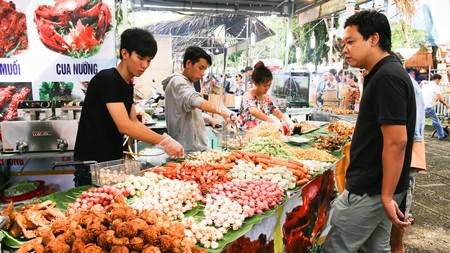 As Ho Chi Minh City’s food landscape continues to develop, more festivals dedicated to celebrating the cultures and cuisines of Vietnam’s largest city are popping up each year. So, from venerable observations of Vietnam’s culinary past to Deep South barbecue to tacos, let’s take a dive into the best food festivals in Saigon.

With a banh mi stand on every other corner, thousands of independent Vietnamese restaurants and a growing international food scene that includes some seriously good pizza, Ho Chi Minh City is where good foodies go when they die.

Because Vietnam’s rainy season bisects their year, food festivals are held almost exclusively during the dry months. They start in November and run through to April. For the rest of the year, it’s recommended to eat somewhere with a roof. 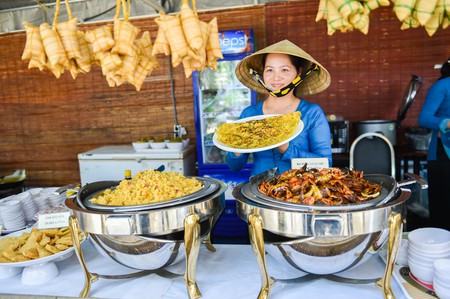 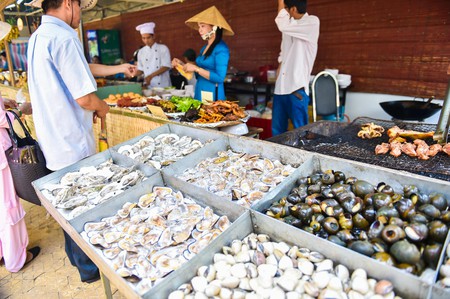 Founded back in 2014, the New Zealand Wine & Food Festival is one of the oldest food events in the city. It’s certainly the oldest one with a focus on international food. Put together by a group of Kiwi expats living in Ho Chi Minh City, the non-profit event imports some of the most ridiculous food and wine to raise money for a roster of worthy causes.

The festival takes place in late March, right before the country’s rainy season kicks off. It’s held on the scenic grounds of the Royal Melbourne Institute of Technology University, Saigon South campus that’s surrounded by the river on two sides. Considering that you’re only a few hundred meters from one of the biggest highways in the city, it’s surprisingly tranquil.

Attendees can sink their teeth into New Zealand lamb dishes and bowls of fresh green-lipped mussels prepared by some of the city’s top chefs, and each with a recommended wine pairing. Actually, it’s the wine where the festival really shines. Last year, guests had the choice of more than 30 New Zealand wines, enough to ensure that no matter whether or not the sunglass-sporting young man with an acoustic guitar on the event’s live music stage could actually remember the lyrics to ‘Banana Pancakes’ by Jack Johnson, they were going to have a good time.

Top-quality food and a truly epic wine selection mean that, if you’re craving a little western flavour during your time in Saigon – and don’t mind kicking 2,000,000 Vietnamese dong (£72) toward a few good causes – then the New Zealand Wine & Food Festival is definitely going to hit the spot.

Now in its 15th year, the Ho Chi Minh City International Food Festival is the biggest culinary event in Vietnam. The event takes place at the Youth Cultural House in District 1. Last year, between 14-17 November, the Cultural House’s main hall was transformed into a dizzying mixture of sounds and smells, with event organisers claiming that more than 300,000 people attended.

Stepping inside the festival hall is like immersing yourself in a mouthwatering olfactory kaleidoscope. Vietnamese vendors barbecue skewers of spicy chicken and smoky pork by the thousands, ladle out portions from gigantic pots of pho and deep-fry enough pancakes for a decent impersonation of Shrove Tuesday in Belfast. It’s incredible.

Alongside the Vietnamese vendors, Indian, Thai and Chinese chefs ply their trade, adding further to the whirlwind of conflicting sensory impressions. Last year there was even a traditional Turkish ice-cream man – right next to a stall that was selling warm, coconut-flavoured worms.

If you want to get a real sense of the length and breadth of cuisine in Saigon, this food festival is both a must-see and a must-taste. 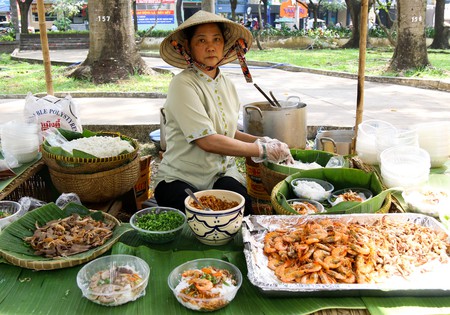 The Many Food Festivals of Saigon Outcast

The heart of international food celebrations in town is Saigon Outcast. Since 2012, its founders have been applying their scrappy, DIY approach to a space that’s grown to include bars, a café, regular movie screenings and even a rock-climbing gym. Today, it’s probably one of the more important cultural spaces for young people in the city. It hosts events all the time, giving a platform to artists, musicians and chefs.

Saigon Outcast hosts a ton of events throughout the year, so here’s a quick breakdown of some of the best ones. It also does a free pancake day, a barbecue festival and regularly gets vendors in to cater their other events as well. If you’re craving something a little different, Saigon Outcast is a great spot.

Tacos are the root of all goodness, and at the Saigon Taco Festival you can spend the day grabbing tacos from every vendor in the city, basking in the sunshine, beer at the ready, listening to live music. It’s ideal.

The Saigon Gin and Rum Festival

The Saigon Gin and Rum Festival has a great selection of locally made rums and imported gins. If all the rice wine and light beer is getting you down, come along for a cocktail (and food) with some live music.

Back in 2020 for its third year, the Gin and Rum Festival is held on the last Saturday in March, and entry costs 30,000 Vietnamese dong (£1.08). This year’s event is going to feature eight different brands of local spirits that you won’t have tried before.

Back at Saigon Outcast this year for the second time, Wine and Cheese Day hosts a bunch of pop-up stores from across the country, selling a ton of wine (with “a whole lot of cheese” and other food pairings). With fun activities like giant Jenga and live music, there’s no classier way to get drunk in the middle of the afternoon.

There are about a million Chinese people living in Vietnam (that’s about 2% of the population). In Saigon, District 5 is home to the largest Vietnamese-Chinese population in the city (although Saigon’s Chinatown stretches into Districts 6, 10 and 11 as well).

Alongside Vietnamese ride-hailing company Grab, the district has launched an annual food festival celebrating the fusion and history of Chinese cuisine in Vietnam. The Cho Lon Food Story Festival is all about highlighting traditional Chinese dishes to locals and tourists alike. 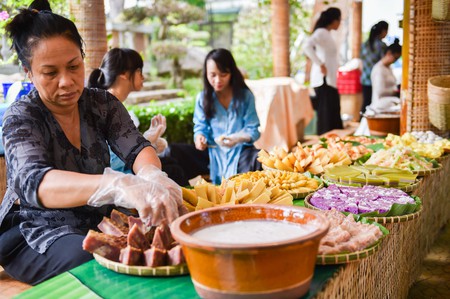 Ho Chi Minh City seems to have a festival for every cuisine, from pancakes to tacos | © Xinhua / Alamy Stock Photo

The festival’s organisers hope that it will boost tourism to Vietnam’s largest Chinatown. See a side of Vietnamese life you may not have encountered before, as well as gorge yourself on dim sum, traditional Chinese dishes with a Vietnamese twist and all the mango pudding you can handle.