How Vietnam's Rich Are Drinking Rhino Horn To Cure Hangovers

Gone are the days when rhino horns were mainly consumed as traditional medicine in Vietnam. In the last decade, affluent groups have been using rhino products for a different reason: they grind up rhino horns and mix the powder with water or alcohol to cure a hangover.

The market for rhino horn in Vietnam has existed for centuries, partially influenced by Chinese traditional medicine. However, an unusual demand started five or six years ago, around the time that a senior government official was rumoured to have had his cancer cured by rhino horn. In a country where cancer causes an estimated 82,000 deaths each year, the disease is undoubtedly a major concern. For desperate patients who could neither afford the proper long-term treatment or who made no progress through these means, the horn of this already endangered animal was a source of hope. They started to turn to the black market. However, the Vietnamese media did not appear to acknowledge this new phenomenon. 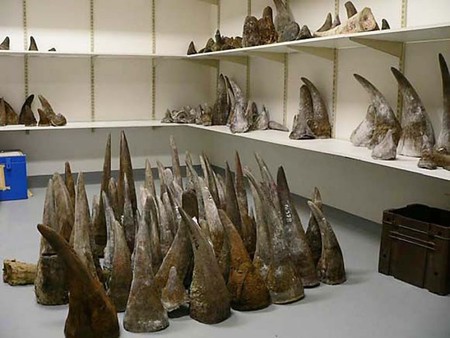 While no research has yet to confirm rhino horn’s efficacy in treating cancer, some respected doctors in Vietnam have reportedly prescribed it in pill form. The increase in horn consumption began here. Believing that the horns had the ability to “kill” cancer, people also started to use them to prevent or cure hangovers.

Consequently, prices escalated, hitting a record $65,000 per kilogram in 2012. This did not seem to put consumers off. The practice of “face consumption” goes a long way to explaining this — a term used to explain why Asian buyers are drawn to apparent luxury products with high prices just to enhance or save face. Popular Vietnamese websites even claim that “rhino horn with wine is the alcoholic drink of millionaires.” The idea of something rare and expensive only stimulates more consumption, and rhino horn is now a means of showing off power, wealth, and social status.

Most consumers of rhino horn in Vietnam today are wealthy young businessmen who purchase the product as a luxury hangover-curing tonic and status boost, according to the 2012 report by TRAFFIC, a strategic partner of World Wild Fund (WWF). At so-called “rhino-wine associations”, where Asian business elites participate, the ground rhino horn is mixed with alcohol or water. The drink itself is not really tasty, but they say, ‘Hey, I’ve got some rhino horn, here you go so we can get pissed tonight and you won’t have a hangover tomorrow,’ according to Madelon Willemsen, head of Traffic’s Vietnam office, speaking to The Atlantic.

While the Vietnamese Government has committed to tackling wildlife crime, no illegal traders have been prosecuted so far. The fact that rhino product trading has now shifted to online social platforms complicates the issue, especially when it comes to those who talk money.