How to Stay Safe Traveling in Vietnam 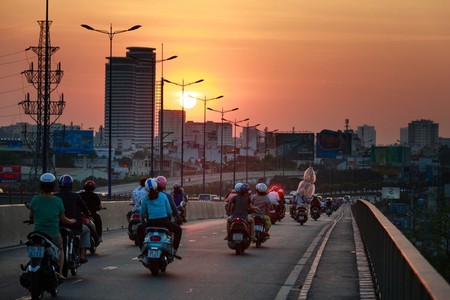 Violent crime committed against tourists in Vietnam is rare. Petty crime, on the other hand, happens every day. Even veteran travelers fall prey to bag snatchers and pickpockets, but there are strategies to keep you safe as you travel through this country. It’s better to plan ahead than to spend your whole holiday worrying about what dangers are lurking for you, so let’s have a look at the easiest ways to keep you out of trouble.

This probably seems like an overreach, but Vietnam is near the top of the list for traffic fatalities per capita. And according to the World Health Organization, motorcyclists account for 59% of road collisions in the country. While most tourists never have a problem on motorbikes, the risk is very real. If you do get on a motorbike (which is a hell of a lot of fun, to be fair) then wear a proper helmet. Don’t let any tour group put a flimsy brain bucket on you.

Bag snatchers are a constant threat in Vietnam, especially in touristy areas. They often work in pairs and prowl for bags that look easy to swipe. They’ll even try for bags with diagonal straps, giving the victim an awful case of whiplash whether they succeed or not. If you have a shoulder bag or a purse, try to always keep it on the side of you away from traffic. Backpacks are your safest bet.

Cross the street slowly and steadily

Look at the drivers coming at you and make sure they see you. You’ll be tempted to wait for a break in traffic before marching out from the relative safety of the crummy sidewalk, but you’ll just be waiting forever. Take small steps and never go backwards. For extra precaution, put your hand up in the air and wave it. Sometimes drivers can’t see you through the traffic, so a raised hand gives them a bit of warning. 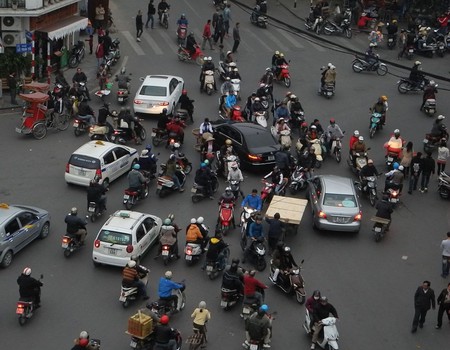 It's madness on the streets in Vietnam | © franzfoto/WikiCommons

Seems obvious, right? But every so often a violent crime involving a foreigner makes the news and it usually turns out they were involved in a drug deal. Also, people often have very bad experiences with street drugs because they didn’t get what they wanted. Accidental overdoses have happened.

Really you should avoid them at all times, but they’re extra creepy at night. People have told stories about getting assaulted by drivers after getting driven around in circles for ages. The driver will demand a lot of money and threaten to attack you if you don’t pay. Some of them are also drunk, so they drive like maniacs. Stick to apps like Grab or Uber, or reputable taxi companies like Vinasun or Mai Linh. 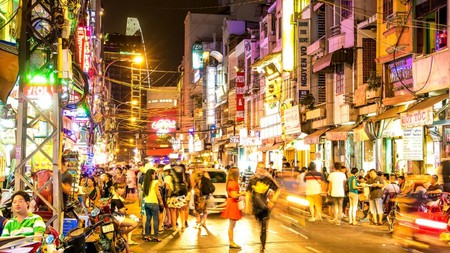 Don’t sit in the front seat of a taxi

Several women have reported assaults by taxi drivers when they were alone and sitting in the front seat of a taxi. Your best bet is always getting in the back, so you can at least get your feet up you give the jerk a boot to the face. Even better yet, don’t travel alone in a taxi at night.

In all the tourist hot-spots, there are thieves watching for careless tourists with expensive gadgets. It happens every day, and they do it quicker than you’d believe. Stories of phones disappearing in a blink are all too common in Vietnam. When you need to make a call or check your map, do so away from traffic. Same with taking a picture. When you’re near traffic, the thieves pretty much get a free try for your stuff. 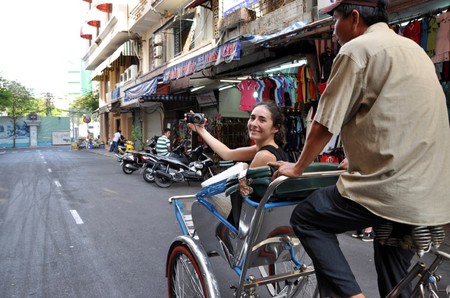 The locals all drink bottled water for a reason. You probably won’t have an issue with brushing our teeth with tap water, but to avoid losing any of your precious holiday, we recommend you brush with bottled water. Since we’re on a related topic, street food is mostly safe in Vietnam. Stomach problems from bad food are rare, but maybe don’t eat too much strange meat.

Have travel medical insurance and go to international hospitals

The first one is fairly obvious. As for the second one, you’re likely to encounter long waits, cramped conditions and frustrating communication issues if you end up in a local hospital. For a better overall experience, make sure you go to international hospitals. We even recommend you research the best ones in the area you’ll be traveling through so you can give quick instructions if you get in an accident. Ambulances aren’t as prevalent in Vietnam, so many accident victims get shuttled in taxis.

And finally: call 113 for the police, 115 for an ambulance (though a taxi will usually be faster)