How to Eat Pho Vietnamese-Style 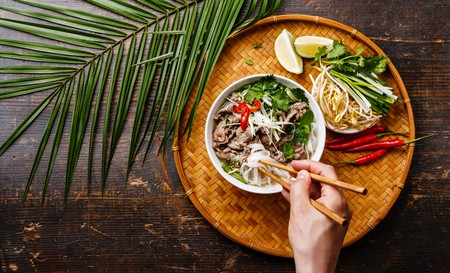 Phở (pronounced “fuh” with a drawn-out vowel), is arguably the most popular Vietnamese dish there is. You can find it virtually anywhere in the world. Here is all you need to know about this dish, from its origins, variations, and how to really enjoy your bowl of phở.

Phở is a complex dish of many flavors and changes from region to region. With so many recipes and variations, the question arises: how do you really eat a bowl of phở, the Vietnamese way?

The history of Phở

Despite its popularity, no one is really sure where this dish originated. Some say the rice noodles were brought to Vietnam by Cantonese immigrants from Guangdong province in China, while others claim the soup itself was influenced by the French during the colonial era. However, most Vietnamese seem to agree that phở originated in the Nam Định province, just southwest of Hanoi, and then spread to other parts of the country. 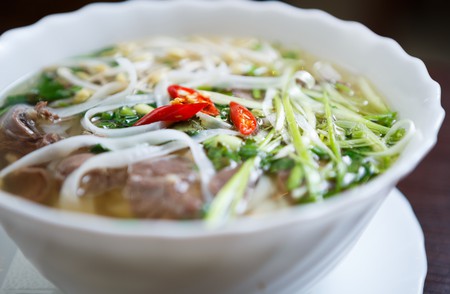 Many different types of phở have sprung up over the past few centuries, including Phở gà (chicken), phở bò (beef), and phở hải sản (seafood). Flavours are also influenced by the different regions in Vietnam. In the north, the broth is clear without many added ingredients, giving a balanced taste. In the south, the broth is murkier and sweeter, deviating from the original recipe. Central Vietnamese phở is known to be spicy. 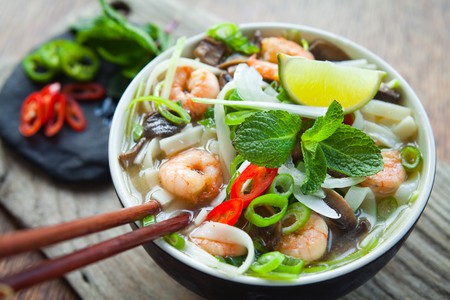 How to make Phở

Despite regional variations in taste, most phở generally contains the same ingredients. There are three main components to a bowl: the broth, flat rice noodles and of course, some kind of meat. The star of the dish is undoubtedly the broth, which is an art form in itself. Mastering the seasoning is a difficult feat, and restaurant owners do not disclose their recipes – secrets which have run through their families for generations.

The broth takes a long time to prepare, usually seven to eight hours. It starts with boiling and simmering the meat bones over medium heat, allowing the water to become infused with deep, marrow flavours. Afterwards, ingredients such as onions, garlic, cinnamon and other traditional Vietnamese medicinal spices are added. 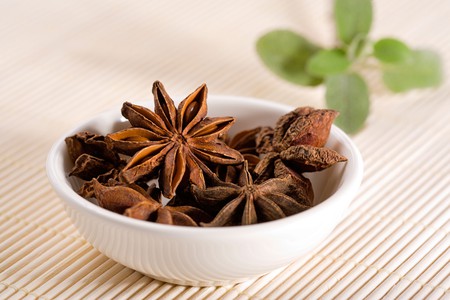 The pieces of meat are cooked individually, placed in a basket and thrust into a pot of boiling water for a couple seconds before finding their way into the broth. The same goes for the flat rice noodles.

When served, herbs and vegetables will arrive at your table piled into a basket, and it’s up to you whether you want to play around with the flavours. It’s also common to find many sauces at the table, from soy to fish sauce. In Western countries, you may find Hoisin and Sriracha.

How to eat Phở the right way

First, it’s imperative that you know your tools. Pick up a pair of chopsticks in your dominant hand and a soup spoon in the other. When you eat, you will be using one after the other.

But before you dig into the deliciousness, sample the broth on its own, unadulterated with any condiments. Make sure to stick your face in the bowl while you’re at it, and let the aroma hit your nose – it will enhance the taste even more. Normally the broth is so perfect, you can usually go without most of the garnishes. So to add these other flavours and textures in, before giving it a chance on its own, is sort of criminal.

If you think more flavour is necessary, then have it. Squeeze in a wedge of lime, or perhaps add a few drops of fish sauce. Tear up some of the leaves and add some bean sprouts. Chilli peppers will make it spicier. Mix the broth again with your chopsticks.

Once you’re ready to take a bite, pinch a few noodles in between your chopsticks, careful to include some leaves and a chunk of meat, then dig in. At the same time, with your other hand, take in a spoon of the broth and slurp it down. Loudly. That’s how the Vietnamese do it. And once the noodles are gone (they usually go first), raise the bowl to your lips with both hands and polish it off. 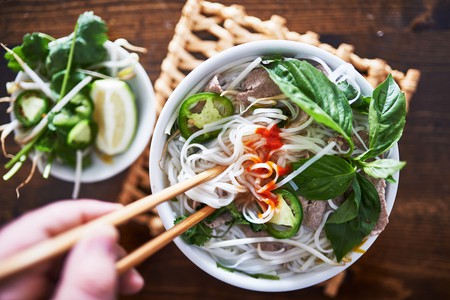