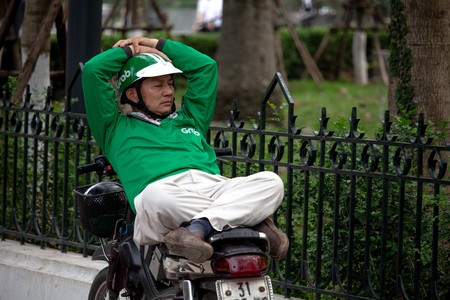 The motorbike taxi has been a mainstay in Vietnamese communities for decades. In urban areas like Ho Chi Minh City, there was at least one on almost every street corner. They waited for regular customers to find them, and often napped during the hotter midday hours. They were essentially setting up shop, and drivers typically staked claim to valuable, high-traffic areas where potential customers could easily find them, like schools, banks and hospitals. 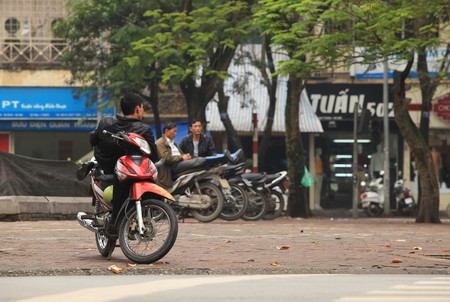 While some customers called their favorite drivers, most people simply walked to where they knew they would find a driver waiting. It was low-tech, but it worked well enough for many years. For drivers, however, this meant that most of their day was spent waiting, hoping one of the people who happened by would need a ride. It was an inefficient use of time – like fishing with a single line instead of a net – but now they have the biggest net of all: the Internet.

In November 2014, Grab forever changed the world of motorbike taxis in Vietnam by connecting riders to a network of drivers with their GrabBike service. The advantages were evident right away: drivers would be available to customers over a much larger area, meaning much less downtime. Customers had price estimates, route maps and the names of their drivers should anything inappropriate happen.

“The price is better with Grab,” said Ms.Lương, a regular customer who lives in Ho Chi Minh City. “For a xe ôm, sometimes I pay double for the same trip. And I think it is much safer to use Grab, especially for women, because you have their name and can report the driver.”

GrabBike has grown at an astounding rate in Vietnam, from 100 drivers when it started to over 50,000 now – but some traditional xe ôm drivers are fighting back against the tide of change. 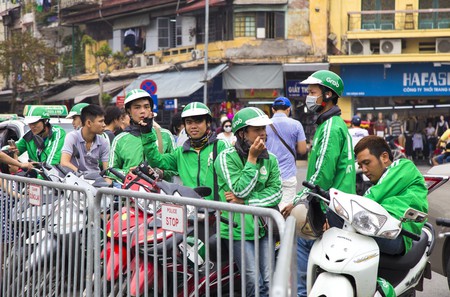 The battle between old and new

As the popularity of ride-hailing apps like Grab and Uber (now shut down) grew, traditional xe ôm drivers found themselves being squeezed out of the market. Their profession had been unattractive for many people because of the long hours and unstable income, but now thousands of new drivers are using these new ride-hailing apps to make a bit of extra income outside their normal jobs – and these new drivers don’t even need to know the layout of their area, because the map tells them where to go, making one of the main advantages that came from years of xe ôm driving obsolete almost overnight. Unfortunately, some groups of traditional xe ôm drivers resorted to violence to stake their claim to certain locations, even attacking people wearing Grab uniforms. Several drivers who work for ride-hailing apps have been hospitalized, and brawls regularly make the news.

Violence and reticence to change aren’t the only problems. Drivers – both traditional and digital – say that because of the low fares and high commissions charged by ride-hailing apps, it’s difficult to make a liveable wage from driving a motorbike taxi.

“I drive Grab nights and weekends,” said Mr.Hiệu, who works in Ho Chi Minh City. “It’s good for a second job, but I don’t think I will do it full-time. There are many drivers, so a lot of time is waiting for customers. And in the day, when traffic is very bad, you go very slow and don’t make a lot of money.”

Some traditional drivers who made the switch to work with a ride-hailing app have said they now make a small fraction of what they used to earn. Drivers in Hanoi and Ho Chi Minh City recently protested when Grab and Uber tried to raise the commission percentage. But despite the growing pains, it’s clear that ride-hailing apps are here to stay in Vietnam. 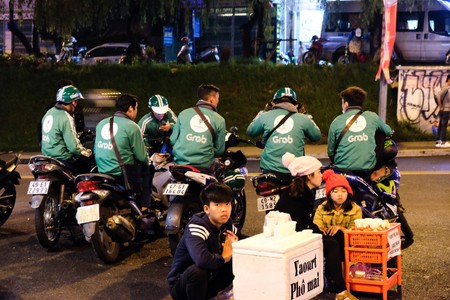 There are still traditional xe ôm drivers, especially in touristy areas, but ride-hailing apps now dominate. As of April 2018, Uber ceased operations in Southeast Asia, leaving Grab as the only widely used choice for both drivers and customers – which is why they have 95% market share for 3rd party ride-hailing apps in the region. But not for long, though, as Indonesia-based Go-Jek has confirmed they are looking at expanding into Vietnam in the near future. This competition threatens to lower the incomes of drivers, but it will also allow them to have a choice of employer. With so much flux in the Vietnamese ride-hailing market, it remains to be seen how companies will adapt to retain experienced drivers. For riders, however, it has never been easier to travel in Vietnam.