Hanoi Motorbike Ban: Is This the End of Vietnam's 'Moto' Culture?

Officials in Vietnam’s capital Hanoi decided to vote unanimously on July 4 to ban motorbikes in attempt to combat pollution and traffic congestion. In a city where it is hardly possible to swing a dead cat without hitting a motorbike, the plan might come as a shock.

It was not just a coincidence when Brad Pitt and Angelina Jolie spent Thanksgiving in Vietnam, they decided to rent a scooter for shopping and sightseeing in Ho Chi Minh City. Hopping on a motorbike, squeezing yourself in the chaos of the bustling, traffic-clogged streets can give you a chance to glimpse the real character of the city, way more revealing than any museum or guided tours.

“I traveled across the country on a motorbike and it gave me memories I will remember for life,” recalled Aleks Robert, a Bulgarian traveler to Vietnam for two months. “For me, the scooter is one of Vietnam’s symbols.” That amusing and interactive side itself can well explain why there is an increasing number of motor tours in most cities and private services for renting scooters or bikes. 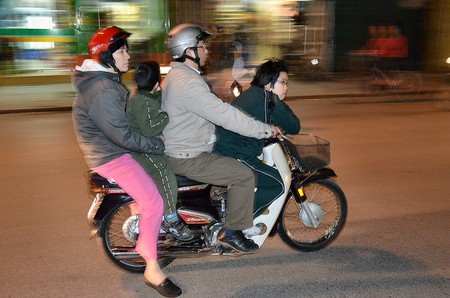 A family on two wheels | © runran/Flickr

However, the decision to ban motorbikes was recently approved by 95 out of 96 city councillors. A report found an “alarming” increase in motorbikes regarding Hanoi’s environmental concerns and severe road congestion. “The ban will be implemented in metropolitan districts and public transport options would be increased to wean people off their scooters”, the report says. The effort is supposed to modernise the city as seen in Seoul or Tokyo, which can also be associated with HCMC’s recent pavement clear-up projects to create an orderly “little Singapore.”

In a country where there are five million motorbikes in proportion to its population of about seven million people, a motorbike presents something more than just a staple means of transportation. People do everything with their motorbikes: carry a pile of goods or a group of four people on a motorbike; sleep on a motorbike, “walk” a dog along a motorbike, sit on a motorbike nearby the riverbank on a date…

Especially for Hien Nguyen, an office worker who commutes daily by motorbike, it provides an insight into Vietnamese behaviours and their mindset. “Look at the hectic, non-stop flow of traffic. People have to be quick, flexible and mostly acting upon their habits. No one has time to think, looking back or forwards, which can explain why they rarely think of anything in a long term,” Nguyen said. 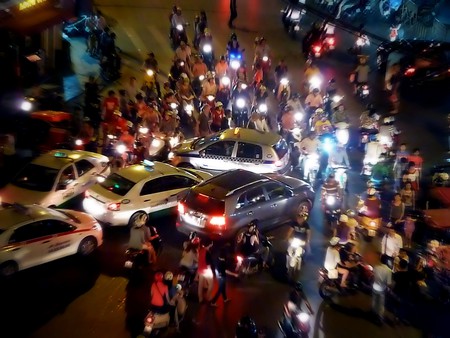 The ban, however, does not include cars. While it mainly aims to boost the number of people using public transport as opposed to the current 12%, some residents at least are having a different plan. “I am not too concerned about the ban. By 2030, I think I save up enough money to afford a car,” said Hanoi resident Hoang Xuan Huong.