A Tour of Ho Chi Minh City’s Statues and Sculptures 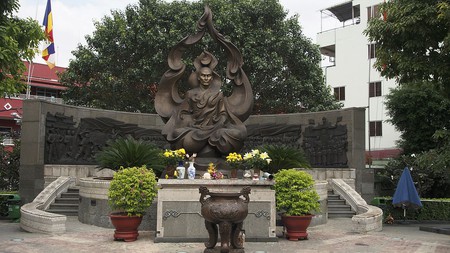 A country’s public artwork can speak multitudes about the nation – Ho Chi Minh City‘s statues and sculptures alone provide a fascinating insight into Vietnam’s history. Here’s a tour of the best monuments to see in Ho Chi Minh City (also known as Saigon).

Start your self-guided tour in District 1 where the majority of the city’s statues can be found. This is one of the most popular areas for sightseeing and you can easily spend an entire day (or more) discovering famous monuments. 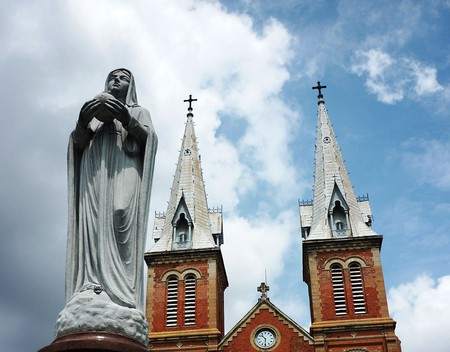 Make your first stop the Saigon Notre-Dame Cathedral Basilica, a 19th-century Roman Catholic church, with two 58-metre-tall (190ft) bell towers. Outside is a granite statue of the Virgin Mary, which was once flooded by visitors when it allegedly shed a tear in 2005.

A short walk from the cathedral is Saigon Central Post Office, a 19th-century building with Gothic and French Renaissance inspired architecture. Here, you will find two statues added in 1998 for the 300th anniversary of Saigon, built in honour of the hard work of the post office staff. 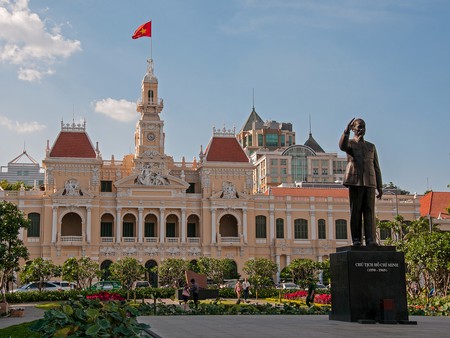 From the post office, head to Ho Chi Minh City Hall where you’ll be greeted by a seven-metre (24ft) statue of President Ho Chi Minh. The striking bronze figure is a recent addition to the city, unveiled in only 2015 and replacing another statue of the president from 1990.

Next, walk a few minutes to the Saigon Opera House to see a stone sculpture of a mother and child, set within a fountain. Then, head east towards Saigon River to discover a statue of Tran Hung Dao, a 13th-century Supreme Commander in Vietnam who successfully repelled three Mongol invasions. Alternatively, stroll north to see the Victory Monument, or visit Saigon Zoo and Botanic Gardens where you’ll find an elephant sculpture donated to the park by Thailand.

A little further afield, District 3 is home to the Venerable Thich Quang Duc Memorial, where a monument is dedicated to the Buddhist monk who set himself on fire in protest at this intersection not far from the Presidential Palace (today’s Reunification Palace) in 1963. The district also boasts an unusual sculpture in the centre of Ngã Bảy roundabout and a statue of Lê Quý Đôn, an 18th-century philosopher.

Elsewhere, District 5 has a statue of Phan Đình Phùng, a 19th-century rebel army leader, while a statue of the Trưng Sisters, Vietnamese military leaders who rebelled against the Chinese in 40 AD, can be found inside the Trưng Vương Emergency Hospital in District 10.