11 Vietnam Traffic Laws You Should Know 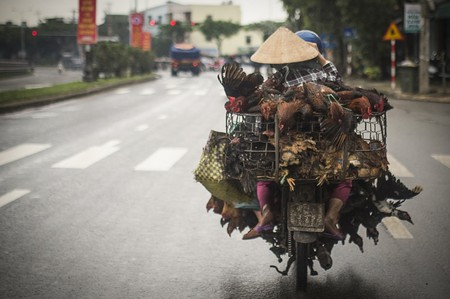 Maybe they're going to a chicken amusement park | © Travel Wild/Shutterstock

You wouldn’t be alone if you thought there weren’t any traffic laws in Vietnam. Everywhere you look, people are driving down the wrong side of the street, flying through red lights, and using the sidewalk like an overflow lane. And the police? They’re waiting for easier money. As a foreigner, you’re dollar signs on wheels to the police, so don’t give them an easy excuse to pull you over.

No more than two people per motorbike

Like most of the laws in this list, here’s one that you’ll see disobeyed every single day. Construction workers often pile four onto an old Honda Win, chugging along with legs splayed out wide. They’re the ones you’ll see making wild U-turns in the middle of the road the second they notice traffic police up ahead. It’s a minor offence, but it’s also one of the easiest for the police to spot. 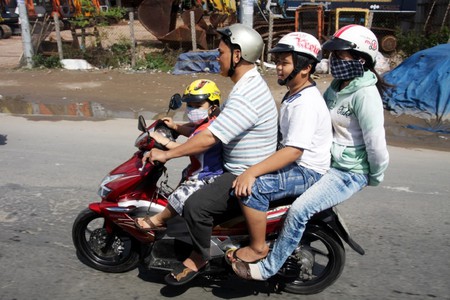 What is she sitting on? | © Alexander Gatsenko/Shutterstock

There actually are speed limits

For motorbikes, the speed limit is 40km/h in urban areas and 60km/h on highways and rural roads — unless the signs tell you otherwise. Police set up checkpoints with radar guns and cameras these days, so you won’t have much choice but to pay. Your best bet is to go with the flow, since they can’t pull over everyone.

Try not to forget your kickstand

It’s scary as hell when you try to make a left-hand turn and your kickstand grinds into the pavement, especially when something as big as a dump truck is coming at you. It’s a common mistake, but it’s actually illegal and can result in significant fines if you come across a cop who goes by the book. 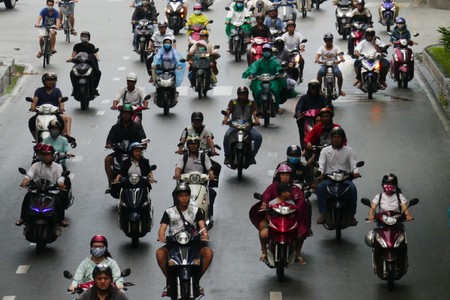 Can you spot the kickstand that's down? | © LeQuangNhut/Shutterstock

Drinking and driving is a huge problem in Vietnam, and police have stepped up efforts to curb it. The lower limit is 0.25mg/l of air, or 50mg/100ml of blood. If you blow over, the fines are steep, and don’t expect to be able to bribe your way out of it every time.

No horns at night

Even after living here for years, we didn’t know about this one. It turns out you aren’t allowed to use your horn between 10 pm and 5 am. We’ve never heard of anyone ever getting pulled over for this, but maybe hold off on using your horn at night when police are around. 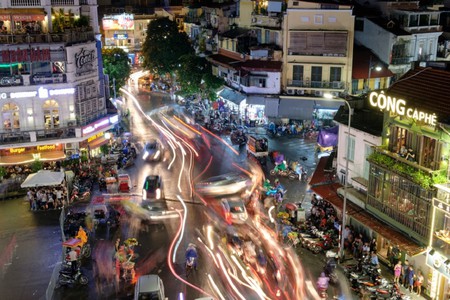 You’re not allowed to weave

One of most annoying kinds of drivers you’ll see on the roads in Vietnam is the guy doing wild zig-zags in heavy traffic. Not surprisingly, it’s illegal to do this. The problem for everyone else is that the law simply says that swaying is prohibited. It’s a vague term, but to be safe, try to avoid driving like you’re a slalom racer.

Don’t run away after an accident

Some people advise foreigners to get away from accidents as quickly as possible, because — even if they weren’t at fault — they’re often the targets of extortion. Heed this advice at your own risk, though. The fines for ‘absconding‘ from the scene of an accident, no matter how minor, can easily add up to more than what you would’ve paid just to settle it on the spot. 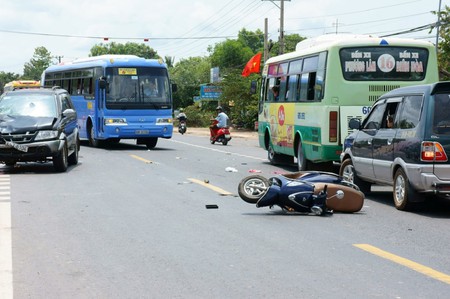 Although, you probably won't be able to run | © xuanhuongho/Shutterstock

Don’t use your cellphone

But everyone else does, right? This is yet another one of those laws in Vietnam that everyone breaks, because they know the odds of getting pulled over are minuscule. There’s simply too many people yammering away on their mobile phones for the police to have much effect. Just don’t do it right in front of a cop. Don’t force them to do their jobs.

Foreigners in touristy spots like Phu Quoc Island and Nha Trang ride around without helmets all the time. It’s dangerous, but it’s also begging for the police to pull you over. The fine for not wearing a helmet is only 30,000vnd (~$1.50USD), but most of the people doing this also don’t have a licence or insurance, so they end up paying much more to get out of the situation. 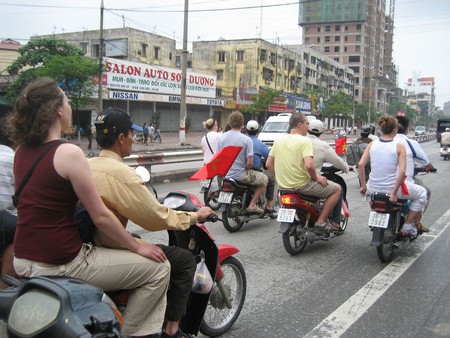 You cannot ride side-by-side with somebody

Groups of friends often drive together like a moving wall, so nobody can pass them. It’s frustrating for everyone else on the road, and it’s also illegal. Don’t be those people.

You can’t give your friend a push

This one is kind of sad, actually. You see a friend on the side of the road, and their bike is out of gas, or something else is wrong with it. Like the decent human being you are, you offer to push them to the nearest repair shop. Then the police roll up. You’ll just have to hope the police officer who drives by doesn’t have a heart of coal. 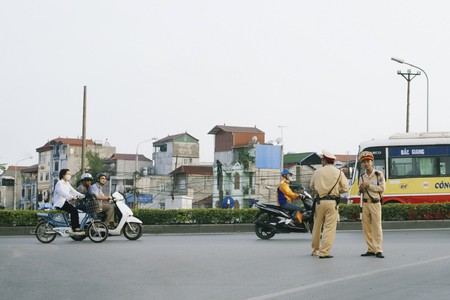 No gas? Okay, license, insurance and registration please | © Nevskii Dmitrii/Shutterstock
Give us feedback