A Guide to the Maeklong Railway Market in Bangkok

If you are in or near the Samut Songkhram province, Bangkok and have an entire day without plans, the Maeklong Railway Market is the place to go for a shopping experience like no other. Here is everything you need to know before you visit. 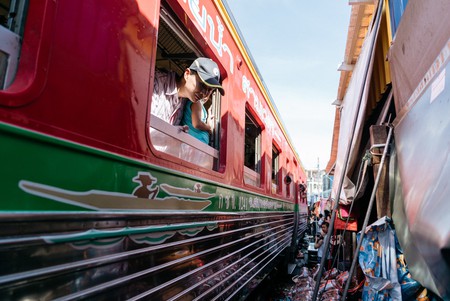 While Talad Rod Fai boasts of being the first train market Bangkok ever hosted, it’s no longer anywhere near a railway – it was moved in 2013 to make way for the expansion of the BTS Skytrain. There is one market, however, that still sits right next to the tracks. As the train comes charging down, the Maeklong Railway Market is transformed to allow it to pass.

The Maeklong Railway Market has been around since 1905. It is in the province of Samut Songkhram, on the Gulf of Thailand. Fishing has been (and still is) one of the main livelihoods of the people who live here, and the market is a way for them to sell their goods. However, officials decided to build a railway to better distribute their catch to provinces around Thailand, including the capital, but the market remained, despite the tracks cutting straight through it. 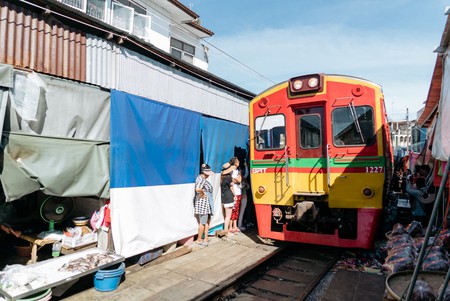 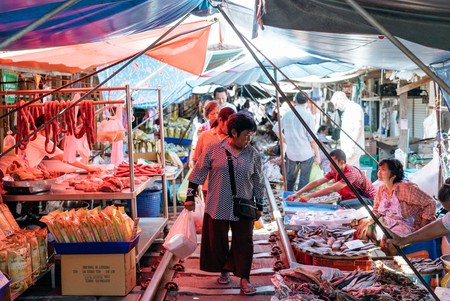 You will hear the train long before you actually see it, as the average speed on the track is 30kmph (19mph). The vendors and merchants collectively and coolly begin to move their belongings and umbrellas away from the tracks as the train barrels forward, honking on its horn every now and then to warn people of its approach. This is why the market is also known as the “umbrella pulldown market”. 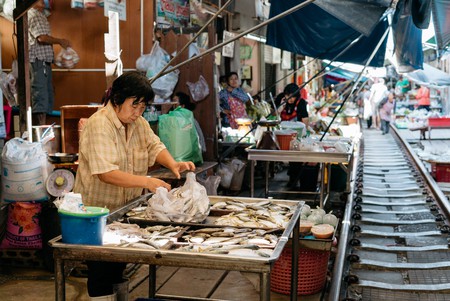 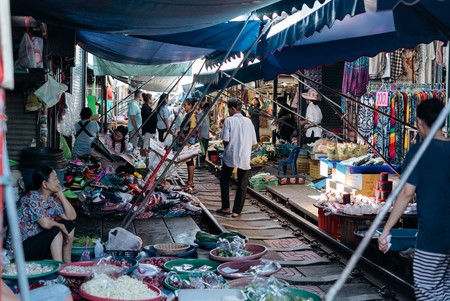 Baskets of goods are dragged away from the tracks, the overhead tents are drawn back and the tracks are cleared, making way for the train. Those hoping to capture a photo are waved back by those who suspect they are a little too close to the tracks for comfort. You will be able to spot the difference between those who work at the market and those who do not almost instantly: visitors to the market, whether they are Thai or foreigners, will have cell phones in their hands and smiles on their faces, and will be shifting back and forth to position themselves for the perfect photo. Those who work there, however, watch this train go by up to eight times a day and get little thrill when it comes past.

Watch as the food you are about to devour is almost run over by the train as it passes. The train is so close you can reach out and touch it as it goes by – although we do not recommend doing this. 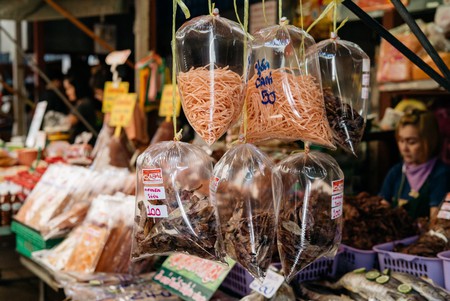 Interest in the market is mostly due to the novelty of the passing train, but it is in fact one of the largest fresh seafood markets in Thailand. While there will be some clothing and accessories available, the bulk of the goods on offer is made up of Thai sweets, meat, seafood, vegetables, fruits and drinks. It makes this the most authentic train market Thailand has to offer, but if you were expecting souvenirs, think again. 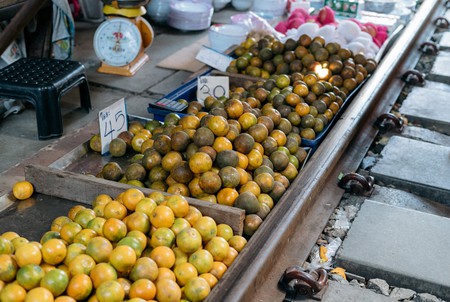 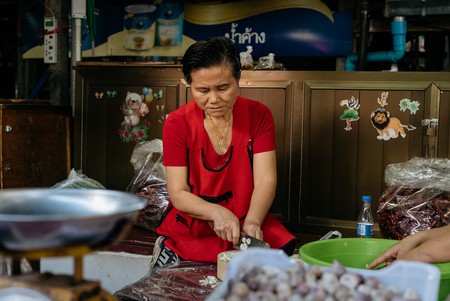 You will find the Maeklong Railway Market about 80km (50mi) outside Bangkok city centre, in the Samut Songkhram region. Depending on Bangkok’s traffic, it takes just over an hour to get here. There are a few ways to get here, the first and certainly one of the most convenient is to take the BTS Skytrain to Victory Monument station and grab a minibus. These buses leave as soon as one is filled, so you never know when your departure time will be. Be sure to look up the train timetable before heading out. Be aware, however, that these times are subject to change, and the trains are often late. 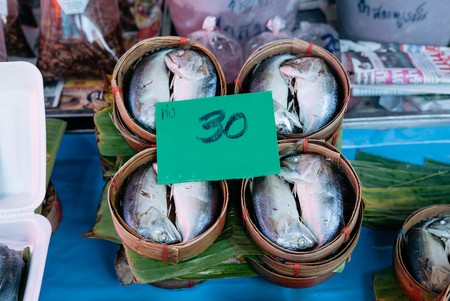 You can also book private tours to visit the market. These tours usually include a stop at the Damnoen Saduak Floating Market as well, as the two markets are only about 25 minutes away from one another.