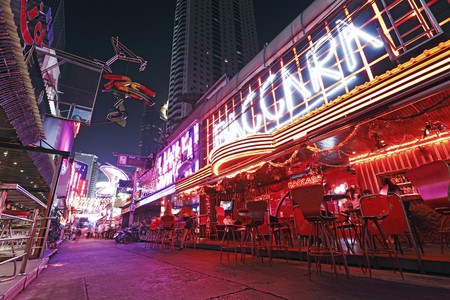 Recent comments from Gambia’s Tourism Minister unintentionally shone the international spotlight on a hushed and illicit industry that has bubbled beneath the surface in Thailand for centuries. “We are not a sex destination,” Minister Hamat Bah told Gambia’s Freedom Newspaper in a January interview urging visitors to not come to the Western African nation under such pretenses. “If you want a sex destination, you go to Thailand.”

It was the latter remark that launched a flurry of diplomatic memos that resulted in the government’s formal apology to the Kingdom, and prompted Thailand’s official tourism body to go on the record that it “strongly opposes any form of sex tourism.”

Opposed or not, Thailand’s sex tourism industry is valued at $6.4 billion a year in revenue as of 2015, in spite of its fringing illegality. Experts warn that the industry has been so tolerated that it is today deeply entrenched, and efforts at regulation should be attempted in lieu of total shutdown. Sudden restrictions, they claim, will likely move the industry underground, increasing risks like disease, fraud, and exploitation among both workers and patrons alike and could encourage human trafficking.

Regardless of where you stand on the issue, the sex tourism industry in Thailand is a significant, if tangential, component of Thailand’s vibrant history, and all roads lead to Bangkok – home to the most active Red Light Districts in the Land of Smiles.

The Ayutthaya Kingdom thrived across Siam from 1351 – 1767 and at the time was the largest and wealthiest trading centre in the East. Its eminence as an international hub helped popularize a sex tourism trade very early on, as widespread prostitution was legal and taxed primarily through state-run brothels.

The development of this industry persisted through the Vietnam War when Thailand became the go-to destination for many American soldiers on R&R, encouraging the growth of go-go bars. Thailand’s long-pervading Buddhism also played a role in this trend. Strict interpretation of Buddhist doctrine places women as lesser contributors to society, and culturally children are tasked with taking care of aging parents. While this stigma has eased today, the pressure for women to achieve financial stability for themselves or their families helped normalize the industry over time.

Then under pressure from the United Nations, the Thai government formally ruled prostitution illegal in 1960 through a policy later replaced by the Prevention and Suppression of Prostitution Act of 1996. The Act acknowledged the illegality of prostitution de jure, but was written with specific emphasis to criminalize child prostitution and trafficking, and would only occasionally police the operation of other venues and activity catering to “sexpats” and tourists. 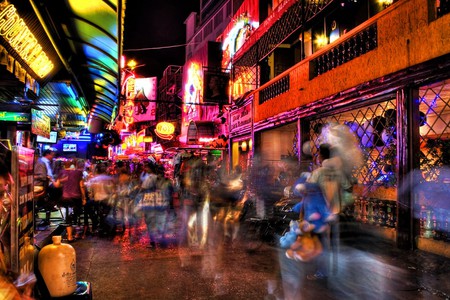 Into the 21st century

Bangkok’s most prominent Red Light Districts include Soi Cowboy, Nana Plaza, Patpong, and Soi Twilight – all adjacent to one another in the centre of the city. The workers are typically women hailing from rural areas of the country that moved to the city to find work, but with limited education and the absence of other credentials required in the increasingly globalized city, take what work they can get.

These districts boast well-known and often high-end establishments that are not the product of illegal trafficking or forced workers – their high public visibility greatly reduces such a presence, along with the watchful eye of the State, itself eager to avoid international backlash for such ethical violations. 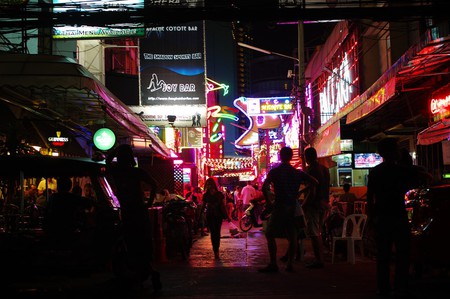 This area of Silom is where go-go bars first gained popularity during the Vietnam War era, and today its two main streets – Patpong Soi 1 and Patpong Soi 2 – remain a huge attraction for visitors curious about the city’s illicit nightlife. The most famous establishments include King’s Castle I and II, known for its mostly post-op transsexual performers, and BarBar Fetish Club, the area’s more, let’s say, niche, go-go bar. The Safari Bar brings in wandering tourists with its blaring oldies classics from the likes of Elvis or The Beatles, while Thigh Bar is a tourist-friendly staple with some of the lower drink prices available. 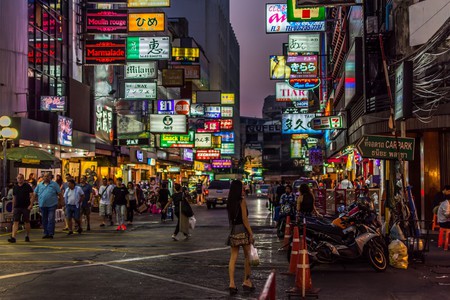 In the early 1990s, Patpong introduced a popular night market. The neighborhood’s newfound family-friendliness changed its late-night atmosphere, and thus “The World’s Largest Adult Playground” emerged in nearby Nana Plaza. This three-story complex has a carnival-like atmosphere and houses dozens of go-go clubs and kathoey, or “ladyboy” bars, along with several short-term hotels that rent rooms by the hour. Angel Witch is known for its grandiose themed rock shows, and Billboard Agogo Bar features a high-energy atmosphere on its rotating dance floor and a Jacuzzi to boot, while Casanova is known to be a more relaxed hangout. The ground floor level has tons of open-air bars and an almost pub-like atmosphere, complete with sports broadcasts, live music, and plenty of people watching. 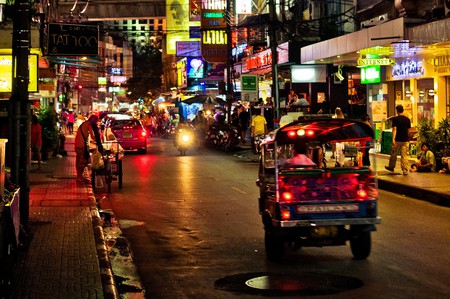 Emerging in popularity around the same time as Nana Plaza, this area was named after a cowboy hat-wearing African-American who opened the first bar back in the 1970s. Today, the neon-soaked energy can be intimidating, but the bars – some 30+ of them – have an overall good reputation and low incidence of scams. Live music shows embrace curious visitors as they enter the main street, and popular establishments include Susie Wongs, famous for its body painting, Tilac Bar, Baccara, and the eponymous Crazy House. 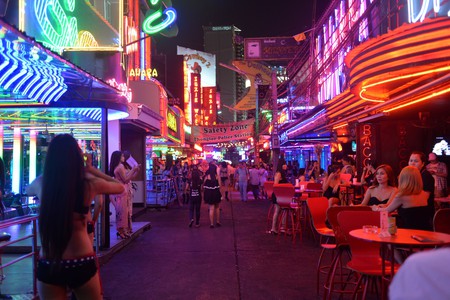 This narrow, fluorescent street just northeast of Patpong Night Market and exclusively operates as Bangkok’s locale for gay go-go bars – and they live up to the high bar set by Bangkok’s vibrant gay nightlife scene. Classic features underwater mermen and a swimming show, while Tawan puts on an impressive stage show rotating acts like dance performances, drag comedy, and more. 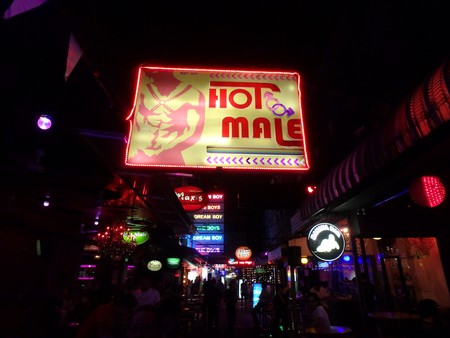 What to know if you go

Like any unregulated industry, Bangkok’s Red Light Districts are flush with scams aplenty. Many of the lesser-known, off-the-beaten-path type places – like those “recommended” by your Tuk-Tuk or taxi drivers – advertise free shows, but visitors can encounter enormous bills full of hidden costs when the show ends, with security guards on the ready to make sure you pay in full. This is particularly prevalent among the “ping-pong” and other live sex shows trademark to Patpong.

The workers in these establishments are often compensated through a variety of payment structures that vary from bar to bar. Often there’s a set salary, supplemented by commissions earned by metrics like the number of drinks bought by customers for the employee. As a result, the atmosphere of these bars is often deliberately set up to pressure its patrons into buying more and more drinks for the working guys and gals, and even if you’re paying for a top-shelf cocktail, they’re only actually having a soda water. Most reputable places make sure your tab is kept right in front of you, however, so you can keep an eye on it and ensure transparency of pricing.

Individual workers are also free to manage their own time through a common practice known as a “bar fine.” If a dancer or bar worker wants to leave for the night with a guest, they pay their “Mamasan,” the equivalent of their manager, a fee for their absence. This can range anywhere from a few hundred to a couple of thousand baht, and is separate from whatever price negotiated with their “guest.”

What’s next for Thailand

The Tourism Authority of Thailand (TAT,) called the Gambian minister’s comments on Thailand’s sex tourism industry “baseless,” but nevertheless the Prime Minister Prayut Chan-o-cha has pledged to change the country’s image of being a sex tourism destination. Raids on establishments promoting sex tourism are already relatively routine in Bangkok, but are almost exclusively focused on the discovery of underage or illegal workers. It’s anyone’s guess what the prime minister’s pledge will mean for this industry and the Red Light Districts, but the junta’s hardline approach to cracking down on illegal immigration and drug trafficking in recent years indicates changes may be in store.

In the meantime, patronizing establishments like go-go bars operating in Bangkok’s Red Light Districts is not strictly illegal – almost all of them are designated under law as “entertainment zones” – and some boast shows ranked among the highest quality in the city. Prostitution is less black and white. While widely tolerated to date, increasing pressure on the Thai government could mean more enforcement in the near future. As a visitor, understand that you’re expected to adhere to the local laws – de jure or otherwise – and must accept responsibility if you’re caught red-handed in the Red Light District.