You'll Wish Your Commute Lasted Longer on This Bus in Taiwan 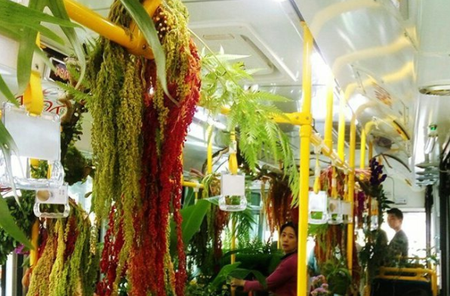 While residents of Taipei aren’t exactly bereft of beautiful green spaces, there’s no denying that Taiwan’s capital is a bit of a concrete jungle. But if you’re lucky enough to ride this bus on your daily commute, you’ll get a healthy dose of Mother Nature in the midst of rush hour traffic.

Taipei’s new forest bus, packed from top to bottom with local, seasonal plants and faux grass seats, is bringing a taste of the outdoors to commuters. The brainchild of local florist Alfie Lin, the forest bus is going down a treat with locals and tourists alike on its route through the city. With the assistance of renowned Taiwanese designer Xiao Qing-Yang, Lin created the ultimate green transportation.

Making stops at places such as the local traditional market, a museum and a temple, the toll-free forest bus was initially only in service for a week’s trial. However, it proved such a success that Lin hopes the plans to rerun the service at some stage during the summer come to fruition.

The bus takes twenty passengers on a leisurely drive along the regular 203 route that runs between Tianmu and Xizhi districts, and unlike a normal bus, there’s no need to rush on or off at your stop. The driver takes it slow and steady, and everyone on board is there for the thrill of the ride.

It’s a tour bus atmosphere, with passengers remarking how the relaxed pace made it difficult to get off at the end of the route. Photo ops are plentiful and there’s no problem with taking a few extra minutes to get the perfect selfie amidst the greenery on board.

The creator Lin stated that it was his intention to bring a little joy and happiness to the everyday lives of commuters and the bus driver. He also hopes that his temporary installation can become a permanent feature on some of the busier commuter routes.

At the cost of over US $3,000 to set up, it would seem unlikely that many buses will be fitted in the future. However, Kuang-Hua Bus Company and the Beautiful Touch Association seemed unperturbed by the cost, in appreciation that the aim of the bus project was to make the city a better and more beautiful place to live, and that the publicity garnered by the project made it worth the investment.

Although the Taipei City Government were not directly involved with the project, it would do them no harm to take a leaf (so to speak) out of Kuang-Hua’s book and consider how they too can help make this beautiful city an even better place to live than it already is. With Taipei 101 certified as one of the world’s tallest green buildings, the recent construction of a smog-eating apartment block, and the extensive YouBike system cutting down on traffic and CO2 emissions, the city is certainly taking significant steps in the right direction.