Taiwan's Most Famous Food and Drink 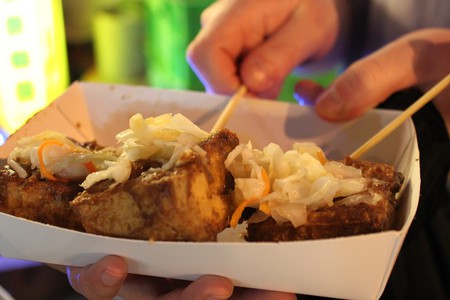 Taiwan is a food lover’s paradise. From the freshest seafood to the most delicious street food at the local night markets, there’s something for everybody when it comes to Taiwanese cuisine. But what are the most famous delicacies this island has to offer?

Taiwan has a reputation for producing some of the finest teas in the world with its oolong tea being particularly popular. Because of the ever-changing weather conditions on the island, Taiwanese teas can vary greatly in taste and often have distinct flavors that set them apart from teas grown elsewhere. This makes them some of the most sought-after teas in the world.

While tea served in the traditional way is popular here in Taiwan, pearl milk tea is even more so. It’s so popular that it is now served across the globe and more commonly known as bubble tea or boba tea. Created here in Taiwan, this tapioca ball-filled drink is fast becoming the island’s official drink and with good reason. As far as afternoon snacks go, it takes some beating.

Taiwan is said to be the home of beef noodle soup, and you’ll find the world’s most expensive bowl here in Taipei. But visitors don’t need to spend US$300 for a bowl, as there are beef noodle shops on practically every corner, with each serving their own special recipe. If you try only one food in Taiwan, then make it beef noodle soup. 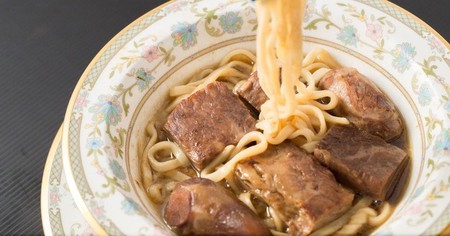 These small shortcrust pastries filled with pineapple paste are the tastiest after-dinner treats that go perfectly with a cup of tea. There are many companies that make their own versions of the snack, but the most famous is probably Sunny Hills. These make a great souvenir, as they can be brought home on the plane.

It makes sense that a place with great seafood should have a seafood dish as one of its most famous. Visit any seafood restaurant in the land (there are a lot of them), and you’ll find diners at every table tucking into this dish. As you may have guessed, it’s an omelet with oysters, but it’s the sauce that goes with it that is often what makes the dish. 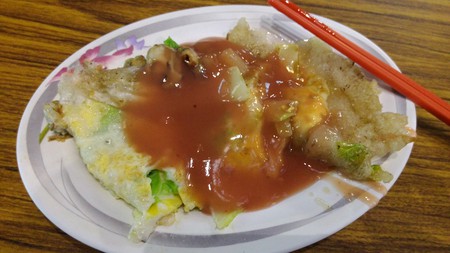 It’s one of the simplest dishes ever, but that doesn’t change the fact that it is hugely popular. Braised pork over rice is minced pork in gravy served on steamed rice, and it’s a wonderfully tasty yet simple meal served in most traditional restaurants.

This thin pancake is served rolled and sliced into bite-sized pieces and is filled with egg and any other filling of your choice. The most popular is bacon, but you can also have tuna, corn, cheese, or sausage. It’s the perfect quick hot breakfast that will keep you full until lunchtime.

This steamed bread sandwich is often filled with braised pork belly and pickled cabbage. It also comes with nuts and tons of coriander in the mix. It’s super filling and extremely tasty and way better than a burger from a fast food restaurant. 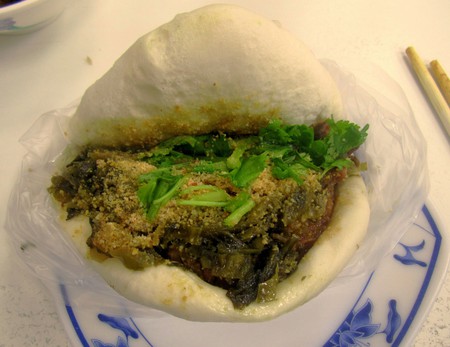 Now, anyone who likes fried chicken will understand that no two restaurants serve the same, and that is particularly true of Taiwan’s fried chicken stands. It’s one of the island’s most popular street foods, and every vendor has their own special recipe. Grab a portion and eat it with a stick while walking through the night market.

This is the dish that everyone has heard of, and very few have tried. And the reason for that is that many tourists simply can’t get past the smell. It really is as stinky as you’d expect fermented tofu to be, but if you can ignore the aroma, it’s actually pretty tasty.