A Guide to Taroko National Park 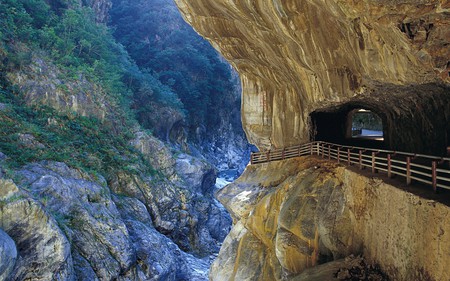 Home to the incredible Taroko Gorge, Taroko National Park is one of the most visited of Taiwan’s national parks. Its proximity to Taipei means that tour groups visiting the capital city often take in a one-day-trip to the park and although it’s a long journey, if you’ve ever been there you’ll know it’s worth it.

History of the park

The history of the national park is a little odd in that it was originally the Tsugitaka-Taroko National Park during the time of Japanese occupation. However, when the Japanese gave control of the nation back to the KMT after the Second World War, the park was abolished.

It wasn’t until four decades had passed that the ruling KMT finally re-established the park and in 1986, Taroko National Park as we know it now became a protected area.

Named for the local Truku aboriginal tribe, it is now a hugely popular tourist attraction.

Some tourists opt to take the train to Hualien City and then take a bus to the national park area while those on group tours often take a private coach from Taipei that takes them directly to the park. It’s a three-hour drive from Taipei to the park, so this option is often most popular.

If you take the train, then you can try to get one that stops at Xincheng station as it’s much closer to Taroko than Hualien City. It’s a small station though, so not every train stops there, and those that do can sell out quickly.

You can take a tourist shuttle bus from either Hualien train station or Xincheng which will drop you off at the national park. Buses outside both stations are very easy to find. 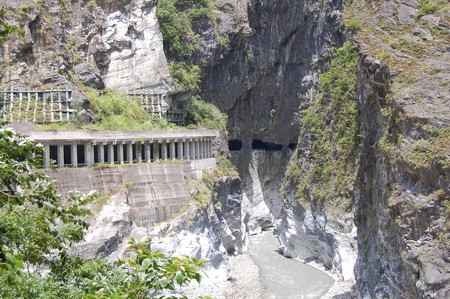 Entrance to the park is free, but if you would like to enter Zhuilu Old Road, you will need to pay NT$200. Check out details about the entrance fees here.

Certain areas of the park require access permits. These include ecological preservation zones and areas popular with climbers. Full details of permit requirements are available here on the official Taroko website.

Taroko National Park is a great spot for hikers, and there are plenty of trails which you can learn more about in our hiker’s guide to Taroko.

The most popular area to visit though is, of course, the gorge itself. This incredible site is the world’s deepest marble gorge and the result of millions of years of river erosion. To be honest, photos don’t really do the place justice. You have to see it to believe it.

When walking through certain parts of the gorge, visitors are asked to wear hard hats as people have been injured by falling rocks in the past.

The shrine is a memorial to the 212 workers who died during the construction of the Central Cross-Island Highway. It was built in 1958 but has been rebuilt several times since due to landslides.

The shrine is perhaps the most photographed attraction in the park with its position just on top of a waterfall making it an incredible photo opp. 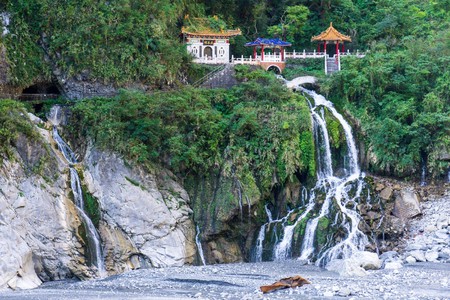 This all depends on what you plan to do. If you’re going hiking, then, of course, the usual gear is necessary, but you should also include a torch for going through tunnels and caves. Insect repellent is essential, as is a good supply of water for your hike.

For those visiting to take in the splendor of the gorge, then you only need to remember to bring one thing – your camera. You can pick up some water at the visitor center while there’s also a small restaurant there. The nearest convenience store is outside the park about 10-minutes’ walk from Taroko Arch.

There are a few restaurants near the hotels that are located in the gorge itself, but these are a little overpriced. Dining in the hotels offers the same problem. Best to bring a packed lunch or buy something in the convenience store.

Staying at the gorge can be convenient but pricey so best to stay in one of Hualien’s many affordable hotels or hostels and make the half-hour bus journey to the visitor center on the day you plan to visit.