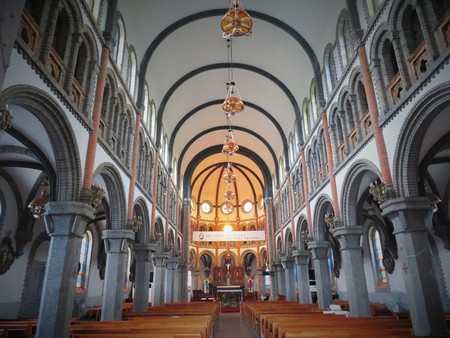 Religion in Korea is characterized by a rise of Christianity, a revival of Buddhism, and despite decades of suppression, the survival of shamanism. Regardless of their differences, it’s safe to say that each of these religions, as well as their respective places of worship, are beautiful in their own way. Below are 10 of the most magnificent places of worship on the Korean peninsula.

Designed by Priest Poinel (the same architect who dreamed up Seoul’s Myeongdong Cathedral), the church was the first Romanesque building in the Honam region. Completed in 1914, Jeongdong boasts an interesting combination of architectural styles. Its rectangular building is crowned by three Byzantine bell towers and features gorgeous arched ceilings. Today it remains one of Jeonju’s most visited landmarks and is the backdrop of several Korean dramas and movies. 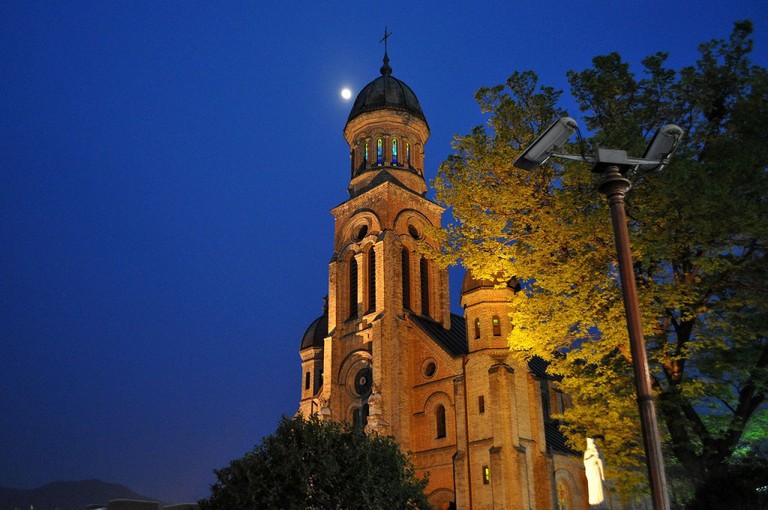 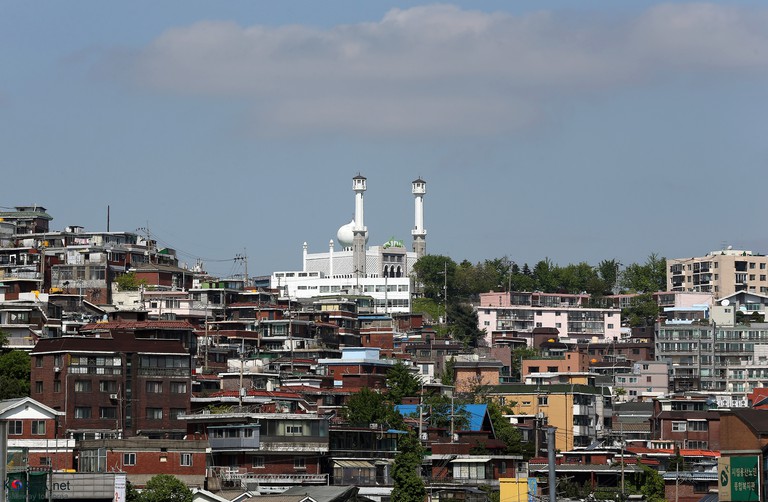 Seoul Central Mosque towers over the multicultural district of Itaewon | © KoreaNet / Flickr
Opened in 1976, the Seoul Central Mosque, or Masjid, was the first mosque in the country, and today serves as the functional hub of the Islamic cultural community in Seoul. It is noted for its characteristically Islamic design. The large minarets and beautiful Arabic calligraphy engravings add a unique character to the skyline of Itaewon, one of Seoul’s most multicultural neighborhoods.
Open In Google Maps
39 Usadan-ro 10-gil, Hannam-dong, Yongsan-gu Seoul, 140-210, South Korea
+8227936908
Visit Website
Give us feedback

While most Korean temples are nestled in the mountains, Haedong Yonggungsa Temple in the southern coastal city of Busan looks out over the majestic East Sea (also known as the Sea of Japan). Dating back to 1376, Haedong Yongungsa features a sanctuary, shrine and cave-enclosed sanctum at sea level, while Buddhist iconography such as its four lion statues that each represent a different human emotion, create a sense of sanctity. Stone stairways and lanterns course along the rocky shore offering breathtaking views, and is often visited by locals eager to watch the sunrise on New Year’s Day.

Situated at the heart of one of Seoul’s most bustling shopping districts, Myeongdong Cathedral was the birthplace of the Roman Catholic community in Korea, and remains an important symbol of Christianity.

Designed by French missionaries, the cathedral was built in a Gothic style, the first of its kind in Korea. In 1894, King Gojong, the twenty sixth and final Joseon Dynasty king and first emperor of Korea, laid the first stone, and for four years, Chinese bricklayers constructed the cathedral. It was completed in 1898. It currently houses the remains of several individuals, including a former bishop, priests and Catholic martyrs.

To truly appreciate the beauty of the Myeongdong Cathedral, take in the high ceilings and stained glass windows from the back of the church around noon, when the organ is played. 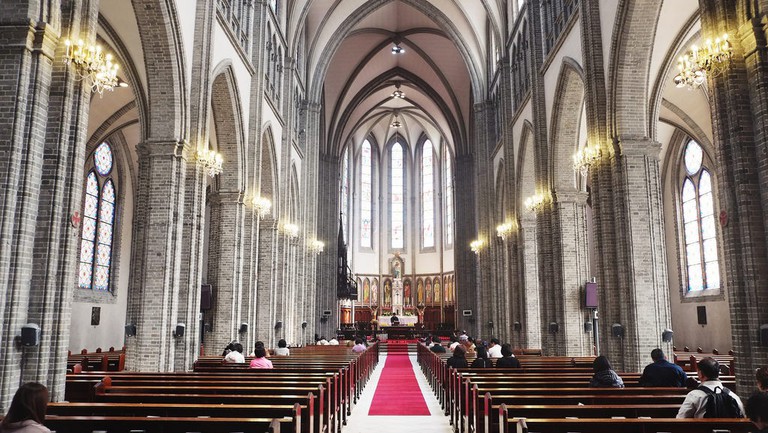 Church
Facebook
Email
Twitter
Pinterest
Copy link
Share
Map View
With an estimated 800,000-plus members, the Yoido Full Gospel Church in Seoul hosts one of the largest congregations in the entire world. With seven church services in its main sanctuary on Sundays, a number of ministries to serve the local and international communities, and its own Prayer and Fasting Mountain, it’s no surprise that worshipers from all corners of the globe come to witness this enormous religious landmark. Seeing 12,000 people sing out in prayer simultaneously, all under one roof, is truly a beautiful thing.
Open In Google Maps
15 Gukhoe-daero 76-gil, Yeoeuido-dong, Yeongdeungpo-gu Seoul, 150-010, South Korea
+82261819191
Visit Website
Give us feedback

Perhaps no Buddhist temple in Korea is as magical as Tapsa Temple in North Jeolla Province. It was here that scholar Yi Gap-yong built over 120 stone pagodas, some as tall as nine meters, without mortar or mechanical devices, all by himself .

Over 30 years, he gathered stones during the day and constructed the conical pyramids at night. Despite strong winds and the test of time, the towers refuse to topple over and more than 80 still stand at the site. They are believed to have mystical, wish-granting powers and visitors flock here in hopes of making their dreams come true.

The surrounding mountains, which according to legend, were formed when gods came down to Earth to have a child, provide a stunning backdrop. 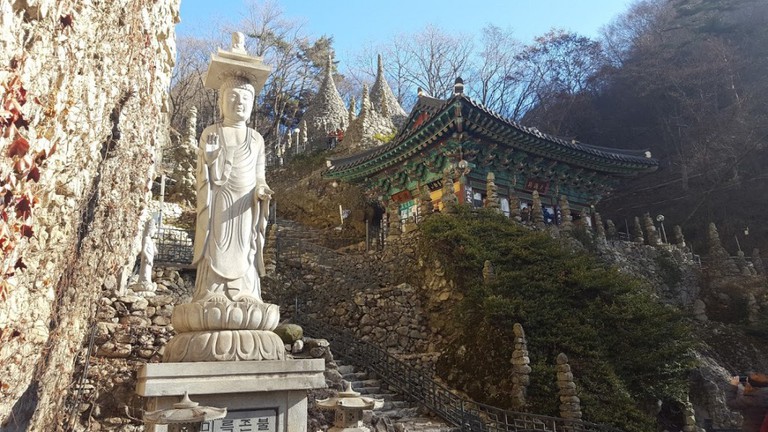 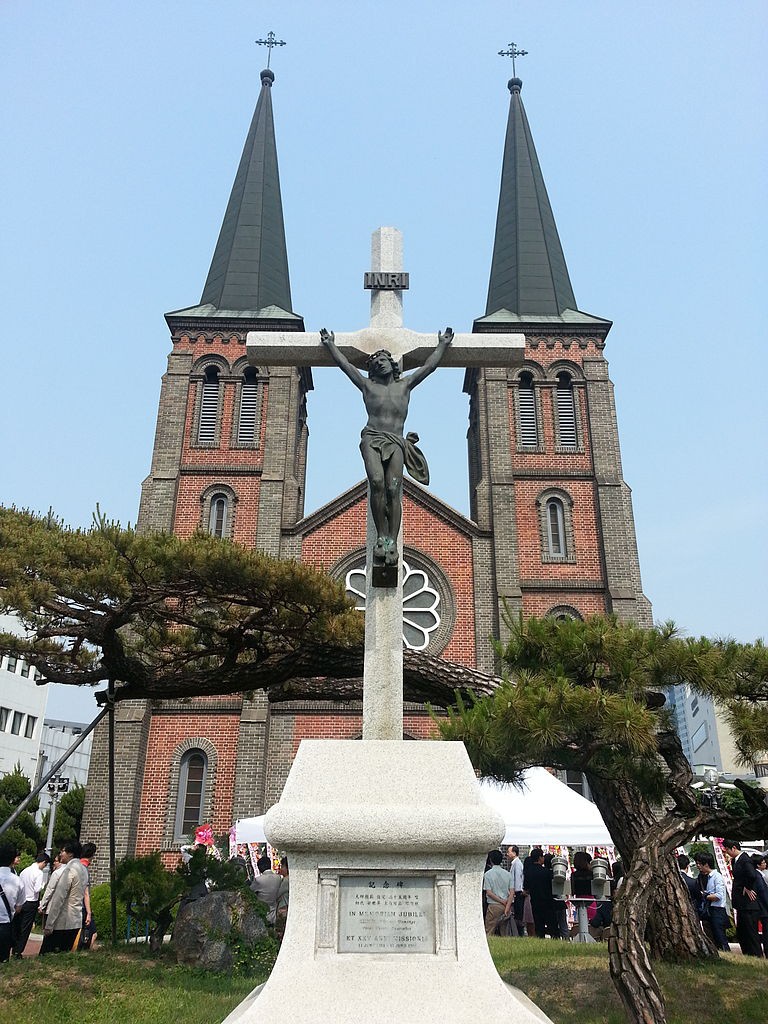 Gyesan Catholic Church in Daegu | © Himuka Tachibana
The Gyesan Catholic Church in Daegu played a pivotal role in promoting Catholicism in the Yeongnam area in the early twentieth century. The church was constructed in 1899, in a wooden, Korean-style, but was destroyed by a fire a few months after construction. It was rebuilt with a new design, utilising imported stained glass and galvanized iron (materials difficult to procure in Korea) from France and Hong Kong, and was completed in 1902.

The predominantly Romanesque church also features some Gothic architectural elements, and features a cross-shaped design with a nave and transepts on both sides. It is the only remaining structure in Daegu from the early 1900s, and is undoubtedly one of the city’s most enchanting buildings.
Open In Google Maps
10 Seoseong-ro, Seongnae 2(i)-dong, Jung-gu Daegu, 41933, South Korea
+82532542300
Visit Website
Give us feedback

Shamanism, Korea’s ethnic religion, is rooted in a belief and worship of unseen worlds of gods, demons, spirits and objects in nature. It has been practised on the peninsula since prehistoric times. Although it is rarely practised (and technically illegal) in modern times, it still has its fair share of followers.

Guksadang shrine on Inwangsan Mountain is one of the most important shamanist shrines in existence and is a site for gut (various ritualistic ceremonies such as exorcisms). Inside and on nearby alters, food offerings for the gods are left by those who travel from all over the country to show their respect.

Although the shrine itself is very small, it boasts a powerful, other-worldly vibe. The sounds of chanting, gongs and drums that ring from its interior can be heard in the surrounding area, while eerie rock formations surround it. Seonbawi Rock, for example, is said to have the power to give sons to pregnant women, while a boulder that emulates a giant skull looks out over downtown Seoul. 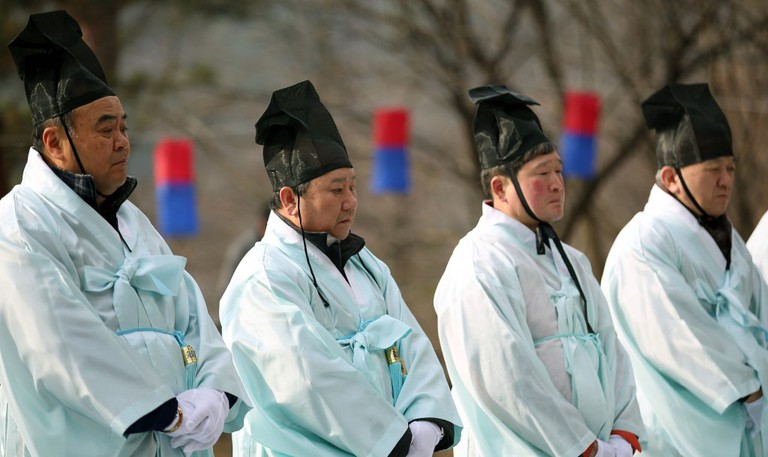 A ritual for a mountain spirit at Inwangsan | © KoreaNet / Flickr

When visiting the ancient Buddhist temple of Sinheungsa, visitors are first welcomed by the bronze Buddha Jwabul Statue, a solemn representation of the sage that towers approximately 10 meters (32.8 ft)high. At the entrance, four Cheonwang (king) statues stand guard over the complex’s building. What makes it an incredibly beautiful place of worship is its stunning mountainous scenery, which transforms into a blanket of fiery hues in autumn. 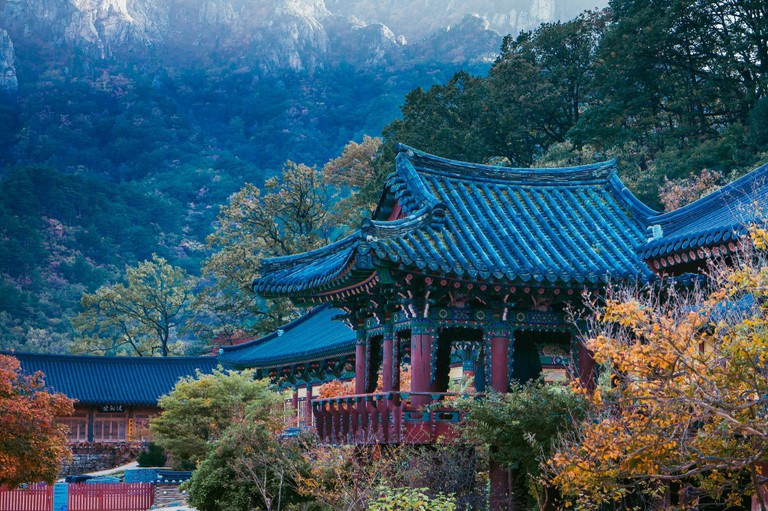 Namcheon Cathedral of the Holy Cross in Busan boasts contemporary architectural elements that set it apart from the rest. Although it may not look like much from the outside, the structure’s interior is a sight to behold. An asymmetrical stained glass wall slants in over the congregation, illuminating the church with colorful, natural light. It is especially beautiful during the Christmas season, when it is adorned with elegant holiday décor.