A Complete Guide to Nightlife in Seoul, South Korea 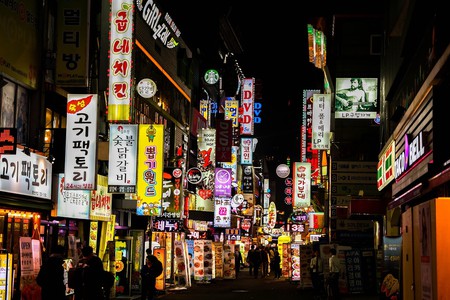 South Koreans may study and work some of the longest hours in the world, but they know how to play hard, too. As a result, Seoul has one of the most dynamic nightlife scenes in Asia, making it an ideal destination for party animals and night owls…if they can keep up with the locals, that is. So put on your party pants and a grab a soju for the road as we take you through everything you need to know about the city’s nightlife. 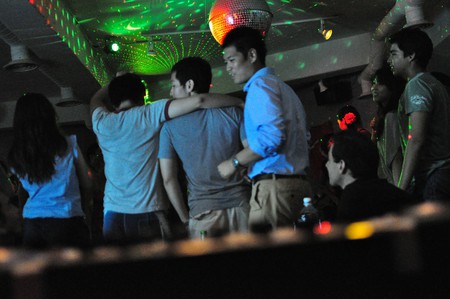 Unlike in the Western world, where reveling is reserved for the weekend, heavy drinking sessions are had just about every night of the week in South Korea. And, rather than downing a few brews in a single bar or restaurant, Koreans prefer to party in cha, or rounds, eating and carousing at multiple locations well into the early hours of the morning.

Usually, a night out on the town involves two or three cha, but a special occasion such as a birthday or holiday can take merry-makers all the way into a fifth. Each round generally takes place at a specific kind of establishment; the following are the most common.

Gogi jib: To start the evening, Koreans tend to go out for a meal together, usually at a gogi jib, or barbecue restaurant. Fatty slabs of samgyeopsal (pork belly) make for an ideal meal to prepare the body for binge-drinking, and also pair beautifully with somaek, a widely-consumed cocktail of soju and maekju (beer).

Bars: Drinks are usually the focus of the next round, which is usually at a bar. Whether you’re a cocktail connoisseur, craft beer enthusiast, live music junkie, or want to get buzzed on a budget, Seoul’s got a bar for you. A Korean favorite is the ‘self bar’, where you can grab your own beer from one of the many refrigerators and pay when you leave. Expect impressive drinking techniques, outrageous drinking games, and even a few Seoul Trains (an epic, domino-like series of bomb shots). 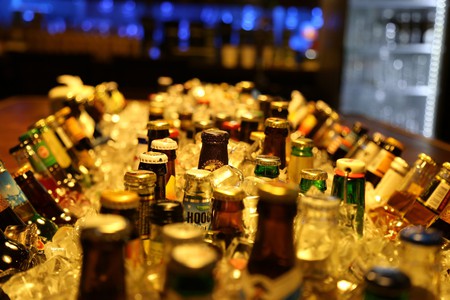 Hofs: Hofs are common hangouts for round three, as anju (drinking food) such as fried chicken or sausage platters is typically served, and usually must be purchased.

Clubs and lounges: For many 20- and 30-somethings, round four typically involves dancing at a club or lounge. There are plenty of big, flashy clubs throughout the city, with different types of music and atmospheres to please just about any preference. Most charge a cover fee of about 10,000 to 30,000 won ($10 to $30), and some require you reserve a table, so be sure to do your research ahead of time.

Booking clubs: In addition to conventional clubs, Seoul also boasts a number of booking clubs, where young people go to meet casual hookups. Usually entrance is only permitted to those 30 years of age and younger, and bouncers try to keep the ratio of men to women fairly equal.

Noraebang: No night out in Korea is complete without a session of noraebang, or karaoke. Hugely popular among Koreans of all ages, these private singing rooms are practically ubiquitous in Seoul and make for the perfect spot to round off an evening of debauchery. 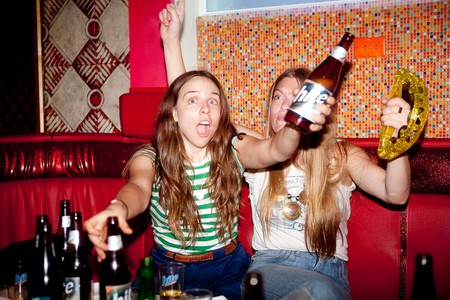 Convenience stores: Of course, if you’re seeking a night cap, Korean convenience stores such as 7-11, CU and GS25 offer up a wide selection of wine, beer, and traditional Korean liquor. Furthermore, the stores are often equipped with patios and plastic furniture where people can drink – legally and on the cheap.

Seoul boasts several nightlife districts popular with tourists and locals alike, and each has its own unique vibe.

University students and 20-somethings flock to Hongdae to escape the pressures of life and get buzzed on cheap drinks. Loud, vibrant, and young, the neighborhood is particularly beloved for its underground music scene, street performers, and hip-hop clubs. 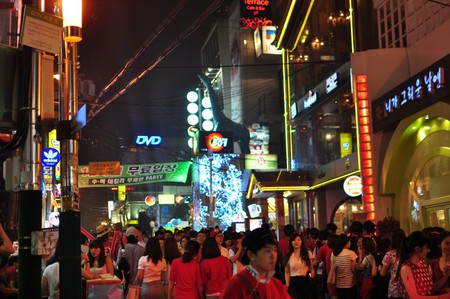 Itaewon, on the other hand, appeals to a wider demographic – people in their 20s, 30s, and 40s. This cultural mecca is a go-to for those looking to enjoy international cuisine, rooftop bars, foreigner-friendly clubs, and Homo Hill, a strip of gay bars, drag shows, and gay saunas. For something a bit more laid back, walk over to the nearby expat neighborhoods of Haebangchon or Gyeongnidan which boast smaller, more intimate establishments.

South of the Han River, Gangnam is home to the city’s high-end clubs like Octagon and Arena, where the young and beautiful dance the night away. In particular, the neighborhoods of Apgujeong and Cheongdam-dong offer a number of extravagant lounges and expensive cocktail bars often frequented by celebrities and socialites.

As a visitor, you’re not expected to know all of South Korea’s very distinct cultural customs involving alcohol. However, if you’re planning on spending time with Koreans – particularly for business purposes – it helps to make an effort.

In business and personal life, Korea places much emphasis on relationships, especially those between people and their elders. When drinking together, the youngest at the table is expected to serve everyone else. There are also certain ways to serve and receive a drink, so be sure to pay attention to those around you and follow suit. 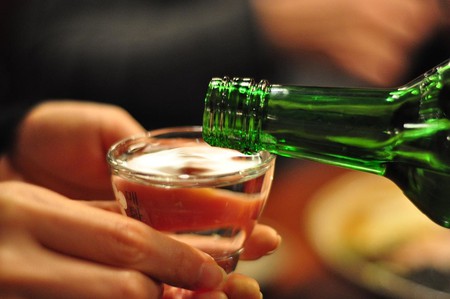 When out and about, be mindful that some clubs are only open to Korean citizens, as there is a perception that non-Koreans (particularly military personnel) are more prone to initiating fights. It’s best to avoid these well-marked establishments altogether. In general, foreigners are usually welcome – just be sure to be on your best behavior to avoid trouble.

It should also be noted that South Korea has very strong laws against drugs. If caught, you could be deported or even sentenced to up to five years in jail for mere possession. The best advice is to stay away from all drugs other than caffeine, alcohol, and tobacco.

Surviving the morning after

By the end of a night out, Koreans will head home for a few hours of sleep before making it to class or work the next morning. How do they do it? In the same way they’ve created a unique drinking culture, they’ve also perfected the art of curing a hangover. From spicy haejangguk (‘hangover soup’) and bottled recovery drinks to medicinal ice-cream, there’s bound to be something to cure your post-soju fatigue, so feel free to let loose and geonbae (cheers)!