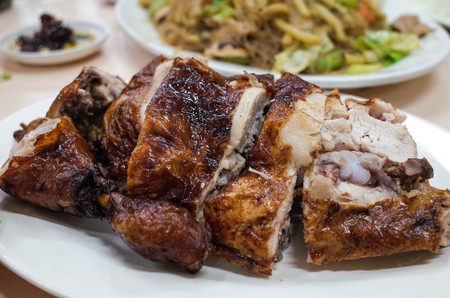 Despite many odds, this family-run restaurant has served delicious fried chicken to locals in Manila for over 90 years – giving Philippine fast food giants a run for their money.

“Half or whole?” the waiter asks, as he points to a glossy picture of a fried, golden brown chicken on the menu. A stack of bright red and yellow boxes are lined up against the kitchen counter, while the only other customer, an elderly gentleman across my table, nurses a bottle of San Miguel. These days, you’ll be hard-pressed to find a place like this in Manila. The amount of independent, family-owned restaurants in the Philippine capital has dwindled in recent years, pushed out of business by shopping centres, fast food joints and a younger generation that doesn’t want to inherit them.

Ramon Lee’s Panciteria is one of the oldest restaurants in Manila. The venue has remained a fixture in Santa Cruz (a neighbourhood in the city’s old quarter), nestled in a bustling side street since 1929. Generations of Filipinos come here for their legendary stir-fried noodles and Chinese-style fried chicken, recipes which have changed little over the decades. 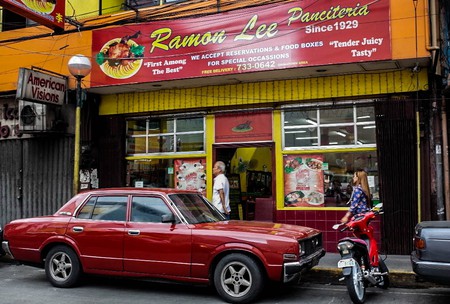 Nestled along a side street in old Manila, Ramon Lee’s has been serving Filipino-Chinese staples since 1929 | © Shirin Bhandari / Culture Trip

In 1581, Spanish conquistadors claimed Santa Cruz and constructed its first church here. The Santa Cruz Parish church was headed by Jesuit priests, designed to keep the area’s predominantly Chinese residents in check. When locals craved Chinese cuisine, they would frequent inexpensive panciterias: a play on the Tagalog word pancit (noodles) and the Spanish suffix –eria, meaning ‘a place that sells’. The Spanish have since gone, but panciterias, like Ramon Lee’s, remain: selling delicious and affordable Chinese-Filipino food in the heart of Manila’s communities. 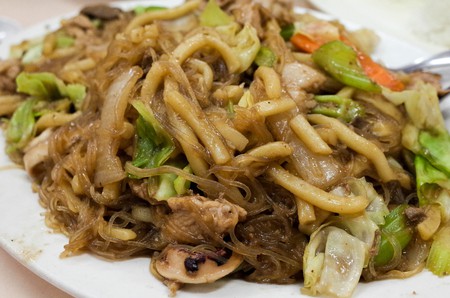 When entering Ramon Lee’s, most people first notice the gaudy colours of its interior. The mirrored, lurid yellow walls and pink upholstery are surrounded by framed photographs of famous Filipino personalities enjoying chicken and noodles. The highlight is a black and white photograph of a smiling Ferdinand Marcos during his law school years, seated among a circle of fraternity brothers, indulging in beer and Ramon Lee’s succulent chicken. 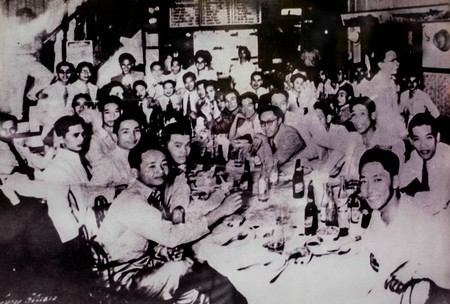 Ramon Lee arrived in the Philippines with his wife Wong Yok King in the early 1920s, migrating from Guangdong Province in China. The restaurant was made famous by his wife’s secret crispy chicken recipe, that is still used today. The bird is marinated with a combination of Chinese spices, such as star anise, cloves and cinnamon, before it is deep fried. Free from a heavy batter, the golden brown skin comes out crispy, while the inside remains juicy and tender. 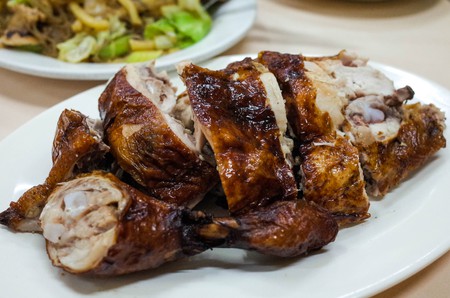 Free from a heavy batter, the chicken is deep fried until golden brown. The skin comes out crispy, while the inside remains juicy and tender | © Shirin Bhandari / Culture Trip

After Lee’s death in 1980, his daughter Fely Lee and her nephew Lawrence continue to manage the restaurant. Her other sister Fay, who is 90, was a well-respected teacher from the famous Chiang Kai Shek College, a Chinese school located in the heart of Manila. “The neighbourhood has seen many changes”, says Fely, who is now in her 70s. “Established family-owned panciterias like Moderna, Wa Nam and Plaza Cafe have all closed down.” She forlornly details how it is now common to witness Manila’s fabulous Art Deco heritage buildings, which are home to panciterias and other family-run businesses, torn down to make way for condominiums.

The street where the restaurant rests has seen drastic changes, old mom-and-pop hardware shops now replaced by brightly lit convenience stores and an air-conditioned Jollibee, the Philippines’ answer to McDonald’s. 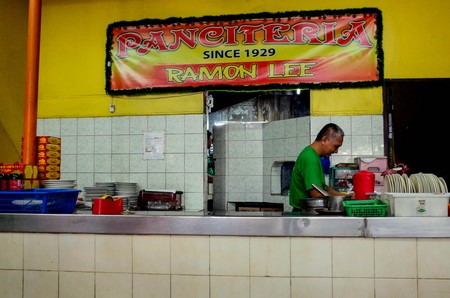 Manila’s obsession with fast food and foreign chains means there’s a lot of competition when it comes to fried chicken. Yet what may just save Lee’s is its loyal following. The taste here is more refined than the commercial chicken houses, which have multiple branches across the country. Ramon Lee’s has just one. “We never thought of branching out, the quality of the food suffers when you do”, Fely says.The restaurant is headed by staff that has worked for Lee’s for decades. The cashier, Corazon Molina, has been with the family for the past 20 years. She replaced her aunt who held the same position for 50 years. Lawrence, Fely’s nephew, takes the booth beside mine and orders lunch. A waiter brings him the head of a large pomfret smothered in green onions, ginger and chillies. Their head cook Willie Flores has been dishing Filipino-Chinese staples since the late 1970s. 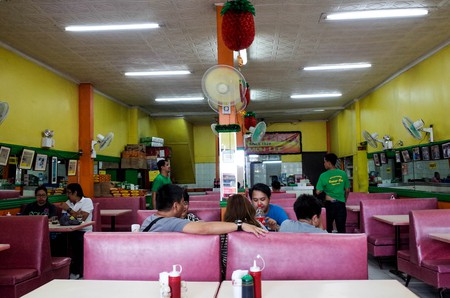 “It’s a different generation now”, Lawrence explains. “The city is fascinated with fast food. My own son prefers hamburgers.” His regular customers are now middle-aged. The loyal patrons try to recapture the nostalgia they felt when they came here with their parents and grandparents. A couple arrives and walks around the room peering over tables, looking at the many photographs of celebrities that have dined in the famed space. 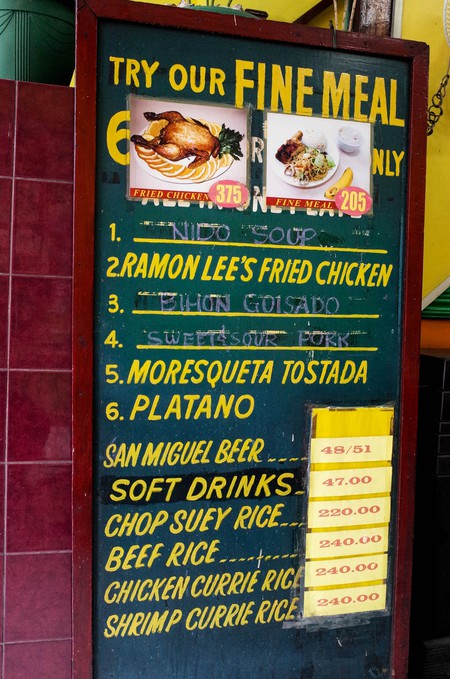 To compete with cheaper corporate-backed restaurants and Western food chains, Ramon Lee’s has maintained its affordable ‘Fine Meal’ deal from the 1960s: a cup of soup, a portion of fried chicken, Chinese-style rice, a noodle dish and banana on one plate goes for 205 pesos (a little less than $4 USD). This set meal has been replicated in other restaurants across the country, but Ramon Lee’s claims to be the first. It is uncertain when Fely Lee will retire and who will continue the restaurant. In the meantime, they will strive to uphold the tradition and secret recipes for as long as they can. She shares her thoughts on the panciteria’s legacy. “It’s hard work, but being kind to people does go a long way.” In the face of glitzy, fast food giants, it is in the Philippines’ family-run, community-driven restaurants where the country finds its history and, ultimately, its heart. 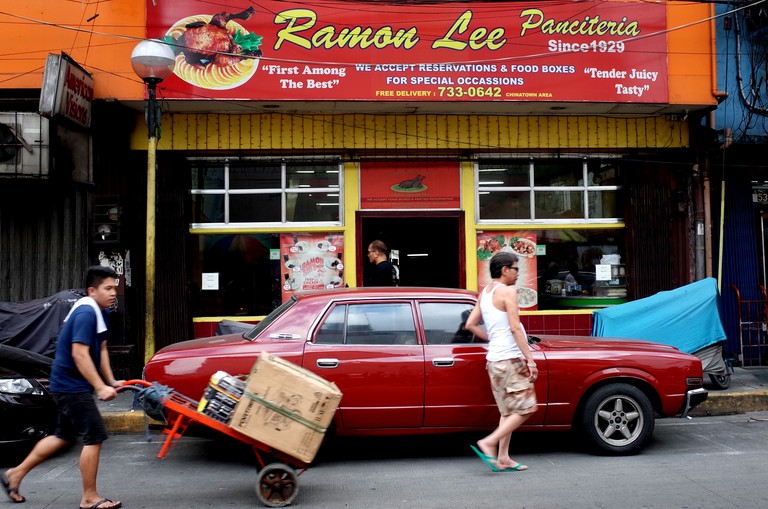 The favourite fried chicken of celebrities and former presidents, Ramon Lee’s Panciteria has been serving Filipino-Chinese staples since 1929 in the heart of old Manila.