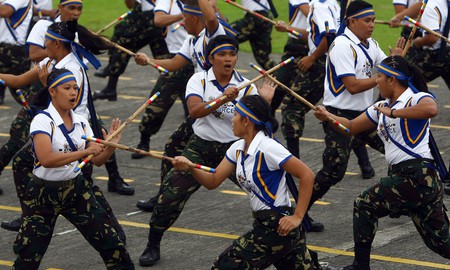 Arnis enjoys the status of the de jure national sport of the Philippines. It is a martial art characterized by the use of “swinging and twirling movements, accompanied by striking, thrusting and parrying techniques for defense and offense.” Having been handed down from generation to generation for centuries, the discipline hones the skill, speed, accuracy and agility of its practitioners.

Arnis was developed by the indigenous populations of the Philippines, who used an assorted range of weaponry for combat and self-defense. Encompassing both simple impact and edged weapons, arnis traditionally involved rattan, swords, daggers and spears.

In 1521, equipped with nothing more than bladed weapons and their fearsome arnis abilities, Filipino islanders defeated Ferdinand Magellan’s armored, musket-bearing Spanish conquistador forces when they tried to invade. 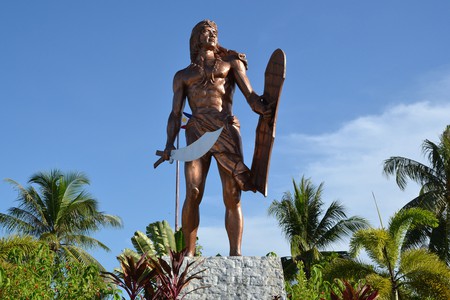 When the Spanish eventually returned and successfully conquered parts of the Philippines, the traditions of arnis were preserved, despite its prohibition, in the forms of ritual dance, performance and mock battles. While earlier Filipino martial arts were influenced by Spanish colonization, the modern forms have been affected by the country’s contact with both the United States and Japan after gaining independence in 1898. Just over a century later, in 2009, the government of the Philippines declared arnis to be the martial art and national sport of the Philippines.

Arnis is otherwise known as eskrima, kali and garrote, and by even more names in different Filipino regional languages. Although Spanish influence had a pacifying effect on Filipino martial culture, the original warrior ethos has persisted and remains on the fringes of the art. Arnis “death-matches” were outlawed as late as 1945 yet, as Mark V. Wiley explains in Filipino Martial Culture, they still take place in private today. 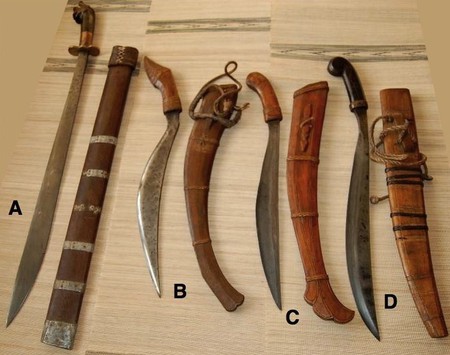 Some of arnis' many weapons | © Lorenz Lasco/WikiCommons

The Philippine government’s declaration of arnis as the national sport has codified a clear martial culture. This should begin to develop an accessible story of Filipino cultural heritage that the outside world can grasp, like Japan did during the Edo period (1603-1868) and as post-cultural revolution China has done with Wushu.

Like all martial arts, arnis is primarily defensive, encompassing hand-to-hand combat, grappling and disarming techniques. However, the fighting style also includes the use of bladed weapons and sticks, in addition to improvised weapons. A baton-like cane is the primary melee tool employed and the weapon used in officiated arnis competitions.

Competitive Arnis generally takes one of two forms: the performance-based anyo model or the combative leban. Anyo competitions are judged on the basis of the overall choreography of the performances, including the gracefulness, strength and force employed. Meanwhile, the leban form tests participants’ agility and reactions, as competitions are judged based on the number of strikes inflicted. Although most leban competitions exclude body contact, such as grappling, blocks and disarming an opponent using the hands or feet, there are some exceptions where full contact is permitted.

Close-quartered, fast-paced fights look great on screen and no martial style involves quite the combative speed of arnis—no wonder it’s so popular with Hollywood directors. The Bourne Identity (2002) features a kali/jeet kune do hybrid fight style when Jason Bourne encounters Jarda, the only other living agent of the terminated ‘Treadstone’ program. Vin Diesel and Jason Statham also engage in eskrima-inspired combat, using metal pipes and wrenches instead of sticks, in the final fight scene of Furious 7 (2015).

In Kick-Ass (2010), the eponymous character fights crime with arnis canes, while his vigilante partner, Hit-Girl, uses Filipino balisong knives. Meanwhile, Liam Neeson uses a combination of arnis, wing chun and silat to rescue his daughter from her French captors in Taken (2008). James Bond too subdues a knife-wielding assassin using Filipino martial arts in Quantum of Solace, the 2008 installment of the James Bond franchise.