11 Traditional Filipino Sweets And Desserts You Need to Try 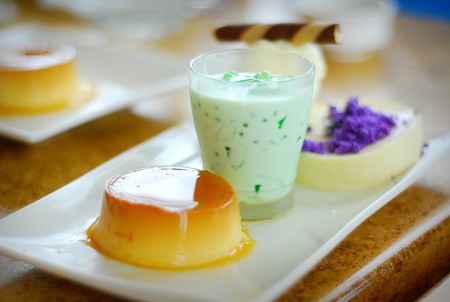 For those with a sweet tooth visiting the Philippines, the country has many a treat to satisfy a sugar craving — and they aren’t run of the mill desserts either. With many cultural influences throughout the country’s history, along with the use of Filipino flair and taste, a wealth of interesting sweets has resulted. So save the donuts and cakes for another day, and get your hands on some of these scrumptious Filipino treats and desserts instead.

The infamous halo-halo is an easy crowd-pleaser. From locals to tourists, everybody loves a tall glass of… well, everything. “Halo” is the Tagalog word for “mix”. So this complex dessert’s name is literally “mix-mix”, because it’s exactly what the diner has to do to be able to enjoy it in all its deliciousness. Halo-halo is a mélange of crushed ice, nata de coco, beans, sago pearls, jelly, sweetened saba banana, sweet potato, coconut, ube (purple yam) jam, evaporated milk, leche flan, ube ice cream, jackfruit, and fried pinipig (flattened immature rice grains). How’s that for complex. 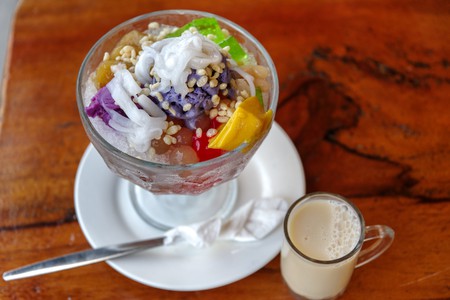 This dessert is as simple as it is delicious. With only five ingredients, Filipinos have managed to make a tropically perfect treat. Its most basic recipe only calls for shredded young coconut, pandan (screwpine) leaves, gelatin, cream and condensed milk. The result is a creamy, aromatic dessert, with chunks of pandan-flavored gelatin, especially delicious when served cold on a hot Philippine day. 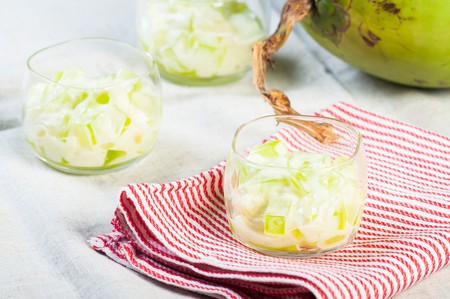 Leche flan is the Philippines’ version of caramel pudding. With many varieties found all over the world, this won’t seem all that new to many. What people can expect from the Philippine version however, is its daring sweetness and richness that create a silky heaven for the palate. 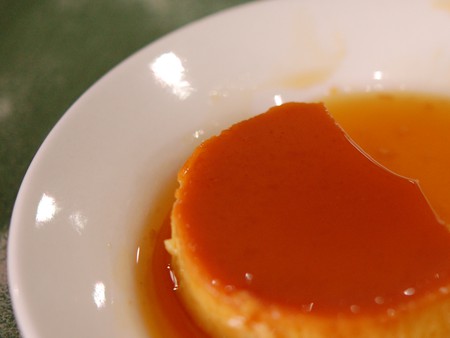 Spanish-speaking readers, don’t freak out. Puto is a good thing in the Philippines. In fact, it’s a sweet steamed rice cake, perfect for accompanying savory dishes like dinuguan (pork blood stew). Aside from the (white) original, this spongy snack now comes in a variety of flavors, from pandan to ube to cheese, which make for a vibrantly colorful display when sold in stores. 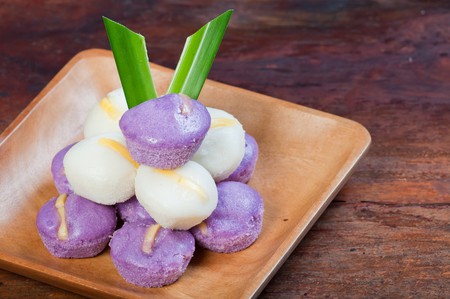 It’s with these kinds of desserts that visitors will understand the glorious love affair the country has with rice. Filipinos have it with all meals, and they love it so much, they even have it after. Kutsinta, like puto, is a steamed rice cake, but instead of soft and spongy, is sticky and slightly rubbery. It’s extra tasty served topped with grated coconut. 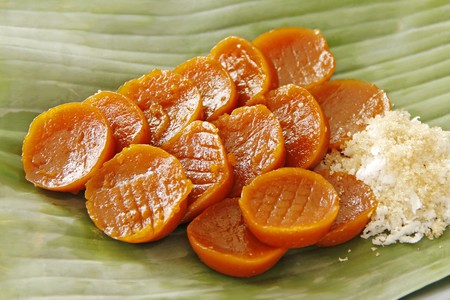 Taho is not a very common dessert (though some restaurants now offer it as such) because traditionally, it is peddled by street vendors carrying two aluminum buckets via a yoke. Usually sold from as early as dawn, when the warm concoction is perfect for cool early mornings, the three-ingredient snack is made by mixing together soft tofu, arnibal (a syrup made of brown sugar and water), and sago pearls. To get a taste of this sweet Filipino favorite, keep an ear out for the peddlers’ ringing calls of “Tahooooo!”, and hail him over for a warm cup. 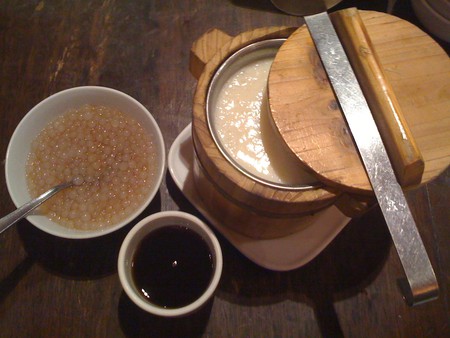 Most Filipino children have very fond memories of turon as it is very simple to make at home. Slices of saba banana and jackfruit are rolled in brown sugar, wrapped in spring roll wrapper, and deep fried with a little more brown sugar to glaze the entire roll. This sweet and crunchy bite can also be found sold street-side for merienda or snacks in the middle of the day. 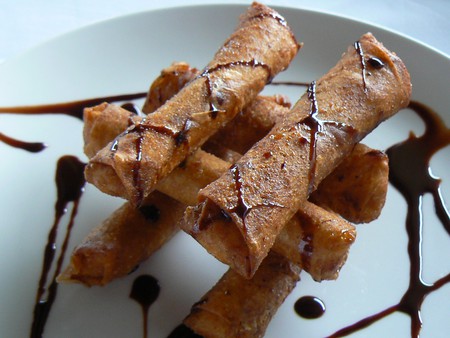 Very similar, yet even simpler than the already simple turon, is banana cue. This skewered treat, often sold as street food, is made by coating saba bananas in brown sugar before frying in hot oil. They are then skewered for easy handling when sold. Another variant of this snack is kamote cue where in lieu of saba bananas, kamote or sweet potatoes are used. Both are very common midday snacks so are also very easily found sold along the country’s streets. 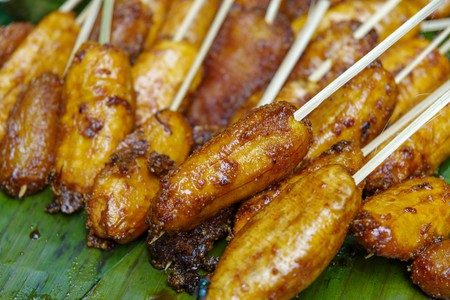 A flavor recently rising in popularity worldwide (perhaps largely due to its fun, vibrant hue) is ube. Like matcha is to Japan, the Philippines has long been using ube or purple yam before the rest of the world caught on and now, it seems to be everywhere. Ube is known as a local flavor in the Philippines and is often used for cakes, pastries, steamed rice cakes, and ice cream. But a fantastic way of using it is embodied in what is known as ube halaya. This thick, creamy dessert is a mixture of ube, condensed milk, evaporated milk, coconut milk, butter, and sugar, and is often served cold. 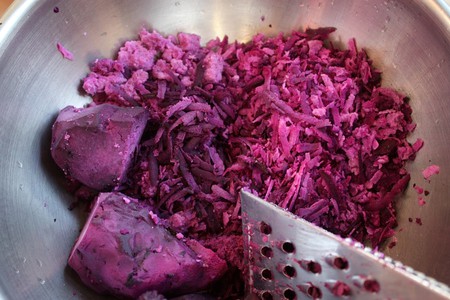 This sweet, buttery bread takes its roots from Spain and has evolved to please the Filipino taste. Soft and chewy, the ensaymada is a typically coiled dough, brushed atop with butter, and topped with sugar and grated cheese. Other specialty variants of the original ensaymada include an ube flavored one and another topped with grated queso de bola (a staple cheese during Christmas time in the Philippines). 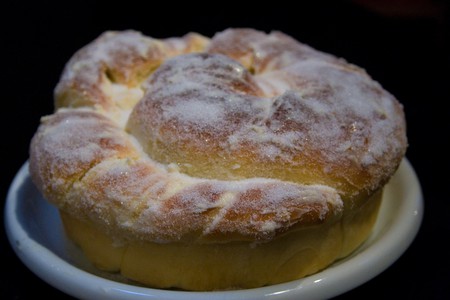 Another sticky rice cake the country is known for is suman. This dessert is made by cooking the glutinous rice in coconut milk with sugar and salt, wrapping it in banana leaves, and then finishing it off in a steamer. It can be served as is with a side of sugar, but another great way of having it is with the accompaniment of a coconut caramel sauce made with coconut milk and brown sugar. 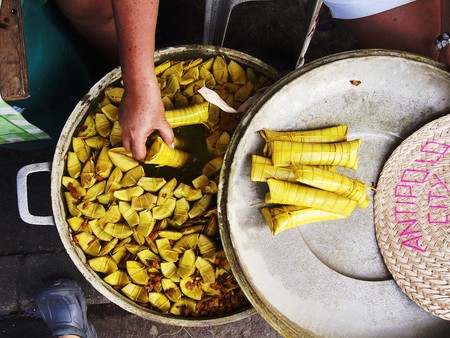