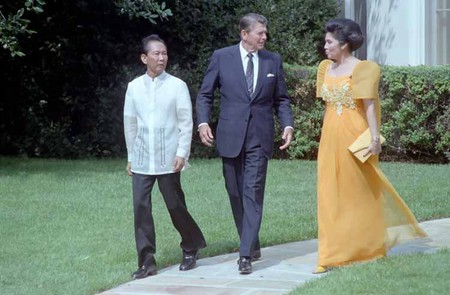 Imelda with President Reagan and her husband | via Wikimedia Commons

Imelda Marcos, former First Lady of the Philippines, is perhaps one of the most controversial female public figures of modern times. Imelda, now 88, had power and wealth as the wife of late Filipino dictator Ferdinand Marcos, who ruled for two decades (1965-1986). She is admired for her glamour, yet despised for her extravagance. She is sometimes compared to Marie Antoinette. Here are 11 bizarre things you might not know about her.

She redefined a shoeaholic

During the EDSA Revolution, when the family was forced to leave the presidential residence and office, Malacañan Palace, they left some of their treasures. One of those treasures is Imelda’s huge shoe collection. Imagine seeing not just hundreds of pairs but reportedly almost 3,000 pairs of shoes!

Imelda refuted this claim and said, “I did not have 3,000 pairs of shoes, I had 1,060”. Some of her shoes are now housed in the Shoe Museum in Marikina, a shoe-producing city in the country’s capital of Metro Manila.

She loved her bling

It’s not surprising she had collected quite a lot of jewellery. Looking at her old photographs, bling and glitter were staples of her look. Her jewellery collection was part of some ill-gotten items that the Philippines later confiscated.

From a Cartier tiara to a rare 25-carat pink diamond, the collection was large. It contained a Bulgari bracelet with a price tag of $1 million. It was appraised by Christie’s and is now being auctioned. Total value? A whopping $21 million.

Her shopping sprees were the wildest

Lady Gaga buying a $60,000-fish? Or Elton John spending $2 million on his son’s nursery? They won’t compare to how Madame Imelda spends. Like other affluent clients, she closed downs shops for her retail therapy, even spending $40,000 in Honolulu back in 1974. She once shopped for a $3.5-million Michelangelo painting in Rome. But who can forget her infamous Cheese Scandal? She once asked the pilot to turn back to Rome because she forgot to buy cheese.

Various receipts were discovered when her family fled from Malacañan Palace, with one 1978 $1.431-million receipt from a Bulgari shop in New York going viral during the campaign period when her son, Ferdinand Marcos Jr., ran for vice president in 2016.

If there is something positive about her indulgent lifestyle, it would be how she helped promote Filipino fashion. Standing at 5’7″ – way taller than the average Filipino woman – with her svelte figure, Imelda Marcos is a sight to behold. Fashionistas still look up to her as a style icon.

She graced formal events in a Filipiniana gown known as “terno”, hoping to revive such fashion in the Philippines and to promote it to the international crowd. The terno has its distinct butterfly sleeve, which Imelda is known to wear even up to this day, earning her the nickname “The Iron Butterfly”. 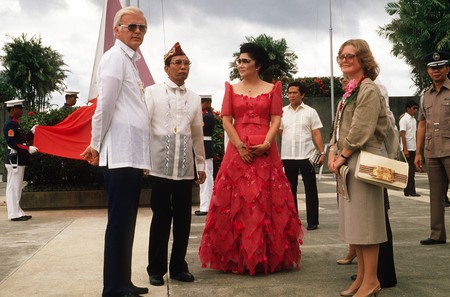 Stephen W. Bosworth, left, US Ambassador to the Philippines, talks with President Ferdinand Marcos and his wife during the reenactment of General Douglas MacArthur's landing at Red Beach on October 20, 1944. Ambassador Bosworth's wife is on the right.

Queen Bee and her Blue Ladies

Long before Taylor Swift had her squad, Madame Imelda had her Blue Ladies. These women were wives of rich businessmen (usually her husband’s cronies), ministers, and ladies that belonged to the upper strata of Manila society. They got their name from their blue uniform and the campaign colour of Ferdinand Marcos. These ladies served as the inner circle of Imelda, helping her in various social events.

Imelda commissioned plenty of buildings during her husband’s term. From the Philippine Heart Center to the now-infamous Manila Film Center. Her aim was to make Manila a world-class city after it was was wiped out from World War II bombing. She wanted international events to be held in the Philippines. Thus, she made buildings specifically to serve various purposes, like the Folk Arts Theater for the 1974 Miss Universe Pageant, the Manila Film Center for the Manila International Film Festival, and the Coconut Palace that was supposed to serve as Pope John Paul II’s residence during the 1981 papal visit.

Let your hair down. 💋

During her “reign” acting like a queen at the height of the Marcoses’ power, Imelda did not want anything getting in the way of her plans. When the Philippines hosted the 1974 Miss Universe pageant, she wanted to make sure that Manila would have great weather, so she asked her husband to order the Philippine Air Force to seed the clouds and prevent typhoon from forming. She also dispatched a plane to collect white sand from Australia for a beach resort opening.

In another instance, the embroidery on her outfits were said to be so intricate that one of her designers claimed some embroiderers nearly lost their eyesight. She also carried many gowns (between 10 to 17 pieces) and picked only one. Her staff would then get the corresponding accessories, bags, and other stuff that went with her chosen gown. It goes without saying that she had a big entourage when travelling.

She charmed the world’s iron leaders

With her beauty, Imelda was more than just a trophy wife or her husband’s arm candy in state visits. In fact, she engaged in state visits all by herself (and her entourage). She met with various powerful leaders of the time like Chairman Mao Zedong, Fidel Castro, Saddam Hussein, and Muammar Gaddafi. Enchanting and intelligent, she was perfect for the job. Fidel Castro, the late Cuban leader, once said that he only drove for two women: his mother and Imelda Marcos.

She was a professional gatecrasher

Armed with her power and beauty, Imelda wanted to be invited to events in the international arena. Wikileaks released a document on how notorious Imelda Marcos was as a gatecrasher, arriving in the US unannounced. She invited herself to the Nixon inauguration and even during the Sydney Opera House’s dedication. No wonder the document described her as a “pest more than a guest.” 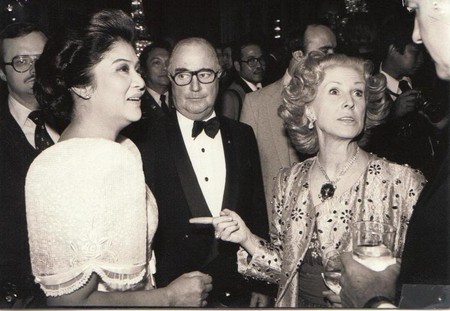 Her high society circle of friends

One of the ways Imelda sealed her elite status then was being within the circle of the rich and famous. She mingled with prominent political figures and partied with royal families and heiresses, including tobacco heiress Doris Duke. As expected, these so-called friends vanished when the Marcoses fell from power.

Imelda was more than just a First Lady. She built structures, served as Manila’s Governor, and directly participated in politics. This led her critics to label the Martial Law era as a “conjugal dictatorship”. Towards the end of her husband’s rule, when he got ill with lupus, many regarded Imelda as the ruler in Malacañan Palace.