Why is Kathmandu in the Midst of a Pollution Crisis? 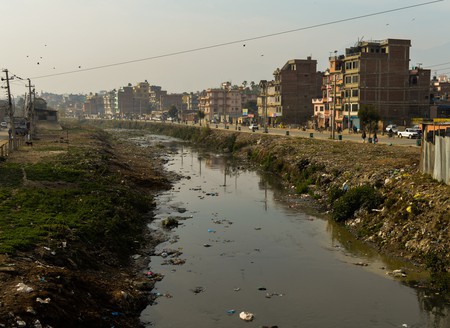 Kathmandu is considered one of the most polluted cities in Asia. How did things get so bad in this potentially lovely city and what’s being done to turn the tide?

The Bagmati River running through Kathmandu is no more than an open sewer; the air quality so toxic that it causes major health problems, and residential and industrial garbage is not handled effectively.

What’s the cause of Kathmandu’s catastrophic pollution?

Nepal is still one of the least urbanised countries in Asia, but it is also one of the fastest growing. The population of Kathmandu and the wider Kathmandu Valley is 1.5 million and 3 million, respectively, and it is evident everywhere that this is far beyond what the current infrastructure can support.

While the presence of garbage all over the city and the toxic Bagmati River are both major concerns, it’s the poor air quality that has been gaining most attention in the last couple of years. Visitors to Kathmandu often get sick within a couple of days of arrival and the long-term health effects on residents are catastrophic, with pollution levels well above those considered safe by the World Health Organization.

A meeting held at the Office of the Prime Minister and Council of Ministers in January 2018 to address the issue of air pollution in the Kathmandu Valley identified several major culprits: uncontrolled vehicle emissions, high dust levels caused by ongoing governmental infrastructure projects (road expansion and a drinking water project that has led to the digging up of roads and laying of new pipes), emissions from industries and smoke emitted from brick kilns.

Moreso, anyone who has been to Kathmandu will have noticed the severe shortage of parks and trees in the city. ‘Natural sinks‘ such as grasslands, ponds and green areas can help absorb dust and pollution and Kathmandu city essentially does not have any. The city is full of concrete, with nowhere for the copious amounts of dust in the air to land and be absorbed.

Is anything being done to curb the crisis?

What’s being done to try to improve the quality of air and water – and therefore, the general quality of life – in Kathmandu? Not enough, many residents of the Nepali capital will tell you. Government inaction and weak policies have, over the years, allowed things to get as bad as they have. However, the public has increasingly been expressing their outrage and small steps are being taken to curb the crisis. 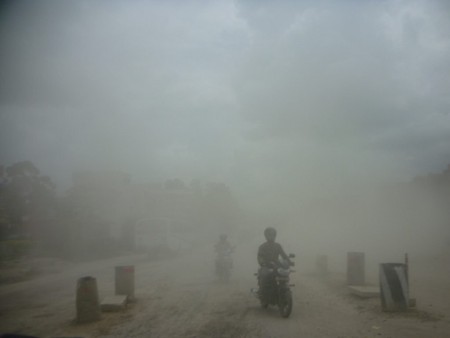 At the same meeting, several actions were identified as essential to reducing pollution in the city: the completion of a long-running road expansion project, continued and systematic vehicle emissions testing and measures to deal with those that fail, monitoring the contribution of brick kilns towards air pollution, garbage management and measures to reduce the burning of garbage, for the Department of Environment to make air quality data available to the public and to promote the use of electric vehicles.

There are small glimmers of hope but there’s a long way to go. In 2016, the government reduced electric vehicle taxes from 40% to 10%, while import taxes on petroleum-based vehicles are 220%. In the same budget, newly constructed homes were mandated to incorporate solar power into their design. In early 2017, the government banned public vehicles older than 20 years from the roads. Critics have argued that these steps have not gone far enough.

Significantly, the private sector is starting to step in and offer certain services that aren’t provided by the government in an effort to improve the situation. Companies like Doko Recyclers, a private waste management company, are helping households and businesses manage their waste. Groups of private citizens have also come together to improve solid waste management throughout the city, such as the Women Environmental Preservation Committee and Clean Up Nepal.