Who Are Nepal's Living Goddesses? 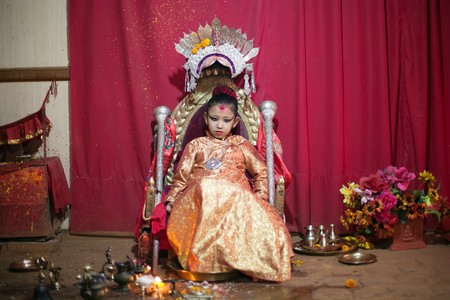 Isabella Tree, author of The Living Goddess, wrote, “All seeing, all knowing, she is said to have eyes in the past and the future, and to see everything that goes on in the present. She has the power to cure illnesses, to remove obstacles in the way of happiness, to bestow immeasurable blessings on those pure of heart. She is said to punish the wicked with a single withering stare.” But who is Nepal’s Kumari and what is the ‘living goddess’ tradition?

Who is the Kumari?

The Kumari is a prepubescent girl who, to believers, is the embodiment of the goddess Taleju, also known as Durga. It is believed that the goddess lives within the girl until she first menstruates, at which point she leaves her and finds residence in another prepubescent girl. 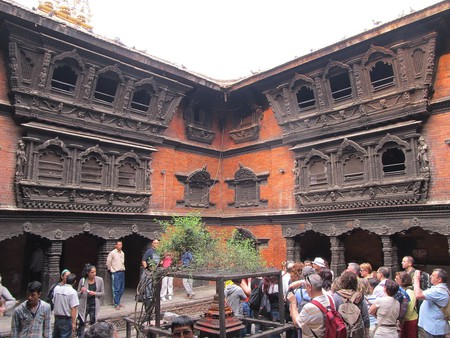 The Kumari tradition belongs to Nepal’s Newar people, an ethnic group who come mainly from the Kathmandu Valley and surrounding areas and whose language is very distinct from Nepali, the country’s lingua franca. Members of the Newari ethnic group follow both Hinduism and Buddhism and the ‘joke’ goes that Newaris are 60% Hindu, 60% Buddhist.

While the ‘living goddess’ is often spoken of in the singular, this is actually misleading. Most Newari villages throughout Nepal have, or have had a Kumari. Nowadays, the most important and famous Kumari is that of Kathmandu. She was the Royal Kumari until the abolition of the monarchy in 2008, followed by the Kumaris of Patan and Bhaktapur, the two other towns in the Kathmandu Valley that used to be their own separate kingdoms. There is also a goddess in Bungamati, a small town to the south of Kathmandu that was badly damaged in the 2015 earthquake, but that was once home to the very important Rato Machhendranath Temple.

At present, four-year-old Trishna Shakya is the Kumari of Kathmandu, after her predecessor, 12-year-old Matina Shakya, retired in September 2017. Unika Bajracharya is the current goddess of Patan. 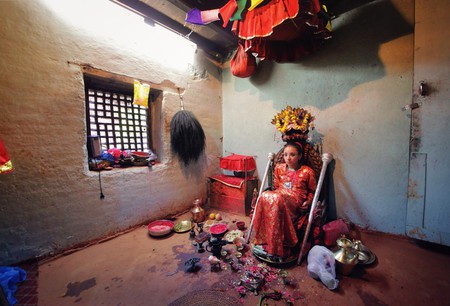 How is the Kumari selected?

Girls must meet a long list of requirements and attributes to be considered for selection as a Kumari. Some of these are physical, others temperamental. Kumaris are selected from the Shakya or Bajracharya castes of the Newari community and their horoscopes are consulted in detail before consideration.

The required physical characteristics include radiant skin with no birthmarks, blemishes or scars; the chest of a lion, a neck like a conch shell, eyelashes like a cow, body like a banyan tree, thighs of a deer and a voice clear and soft like a duck’s.

Many of the events and decisions that are part of the Kumari’s selection are unknown to the wider public, even to her devotees. Therefore, rumours circulate. As Isabella Tree writes: “There are stories of dark initiations at the dead of night: a terrifying ordeal in which the little goddess walks barefoot through bloody courtyards scattered with the severed heads of goats and buffaloes while men dressed as demons leap and howl in the shadows. She is said to spend the night alone, shut up in a room with ghosts and rats.” If she shows no fear, it’s said that the goddess has accepted her as a temporary home. 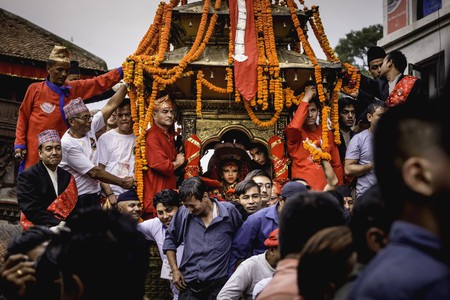 Kumaris wear distinctive red clothing, heavy jewellery, their hair in a tight top-knot and winged black eye make-up. For the duration of her tenure, the Kumari’s feet must not touch the ground and she is only allowed outside her home during important festivals that she is a part of, such as Kathmandu’s Indra Jatra Festival or Patan’s Rato Machhendranath.

Once she starts menstruating, a girl can no longer be the Kumari; so, retirement occurs around the age of 12 to 14. Illness or loss of blood through injury is also thought to cause the goddess to leave the girl’s body, requiring a new Kumari to be found.

It was traditionally believed that some of the residual power from the goddess remained in the ex-Kumari, making her feminine energy too strong to handle. Therefore, many former Kumaris remained unmarried, as men feared her power and it was considered unlucky to marry such a woman. These days, ex-Kumaris tend to lead more normal lives, attending school, getting jobs and marrying eventually.

In the 21st century, questions have been raised over the human rights of the young female children involved in the Kumari tradition. Kumaris, particularly the Kathmandu Kumari, are not treated like normal children. They have been prevented from attending school (nowadays receiving home tuition instead) and from playing and interacting with others of their age. Once they retire from their role as Kumaris, it can be difficult for them to integrate back into normal life because they are less educated and socialised than many of their peers.

Ex-Kumaris themselves have come out in defense of the tradition, saying that they gained much more than they lost from the experience and do not feel that any human or child rights were violated. Still, the United Nations reports on Nepal have highlighted the Kumari tradition as a breach of rights. Some Nepalis are also calling for the reform of the tradition – rather than its abolition – to protect the girls’ human rights.