Samrat Upadhyay on the Modernization of Nepal, the Ferguson Riots, and Being a Global Citizen 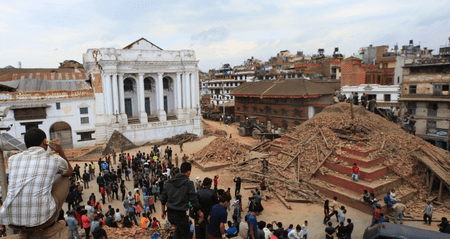 We spoke to the Nepalese writer about the themes of his new story collection Mad Country.

On April 25, 2015, around noon NPT, an earthquake registering 7.8 ~ 8.1 M struck Nepal near its capital Kathmandu, killing nearly 9,000 people and injuring tens of thousands of others. Across the globe in Bloomington, Indiana, at 5 am EST, the Nepalese writer and American resident Samrat Upadhyay flipped open his laptop for a session of early morning writing. Instead he was greeted with news of the tragedy.

In a personal essay published in the LA Times just two days after the tragic event, Upadhyay recounted waking up his wife and the two of them scrambling to contact loved ones. The eventual death toll and cultural devasation would be massive: “Thousands have lost their lives,” he wrote, “many more have lost their homes, and centuries-old temples, prized for their exquisite carvings in Katmandu Valley’s old palace squares, have been destroyed. Katmandu Durbar Square is in ruins. Patan Durbar Square has been devastated. These were World Heritage sites so, in a very literal sense, the whole world has lost physical access to its cultural history.”

In Mad Country, Upadhyay’s new collection of stories, Upadhyay reexamines modern Nepal and himself as a Nepalese ex-pat nearly as far from home as he could be. With great grace and shrewdness, Upadhyay contrasts Nepalese class disparity with American racial tensions. But he is able to bring great compassion to his narratives, writing of a love story set in the days prior to the Earthquake. We previously published Upadhyay’s short story “What Will Happen to the Sharma Family” in which the fate of its members each exemplifies a different aspect of modern Nepalese life.

Mr. Upadhyay was kind enough to answer the following questions.

This is your first major publication since the Gorkha earthquake struck Nepal and nearly leveled Kathmandu. How did that event affect your writing? And why did you choose to set your story “An Affair Before the Earthquake” prior to the quake?
I don’t believe that fiction necessarily responds quickly to disasters and other events of magnitude. Nonfiction is better suited for such responses, and I did write a personal essay for the LA Times within days after the earthquake. I find it hard to pinpoint the moment of big decision for any story–it seems like there are countless small decisions/inspirations that lead to a story’s genesis, but I think in “An Affair Before the Earthquake” I was interested in how the lives of the two lovers were shaping up before the disaster struck. There was an inevitability to their affair, a sense that it was all too real, and it ended just as quickly as it began. The palace square where their affair blossomed also contained historical and cultural monuments that were very real and some of these monuments were utterly destroyed by the earthquake. I was interested in the feelings of belonging and possession and how they can vanish in an instant.

You set one of your stories during race riots at Ferguson, Missouri, in which a Nepalese man is swept up and made woke. He has an interesting exchange regarding slavery with his uncle, who mentions the country’s system of labor bondage. Could you further detail how race and bondage compare and contrast in Nepal and America?
The historical and cultural and ethnic differences between the two country make easy comparisons difficult. There are more than 100 castes or ethnic groups in Nepal, and a comparable number of living languages. Caste often plays a determining role in who ends up being oppressed, with the oppressed group often belonging to the lower or dalit (“untouchable”) castes. Just yesterday I read a news report about how dalit candidates in a remote district of Nepal were prevented from canvassing in neighborhoods dominated by upper caste households. Women from very poor families, who often belong to these marginalized groups, are sold as sexual slaves to brothels in India. The kamaiya system of bonded labor in Nepal, which my characters fleetingly discuss, was officially abolished about 17 years ago, but there are reports that it’s still practised today. In the U.S., there’s a greater deal of awareness now about our ugly past with slavery and the damaging effects of racial discrimination. Yet anti-Semitism and racism and xenophobia have surfaced in an alarming manner recently.

This is a very international gathering of stories. Your characters are traveling to or dreaming about Bombay, or Ghana, or America, or Australia, to name a few. What draws you to transience or having your characters think of the world outside of their locality?
My worldview is shaped by my own life trajectory. I attended a Jesuit school in Nepal run by priests from the American Midwest, so I grew up quite Westernized to begin with. My reading diet at St. Xavier’s in Kathmandu consisted of Charles Dickens, the Hardy Boys, Robert Ludlum etc., and I knew most of the songs by the Eagles, the Grateful Dead, and Neil Young. I studied for one year in Bombay. Then, I traveled halfway around the world to come to America. I’ve lived in Hawaii, whose ethnic diversity is amazing. I have relatives all across the globe. So, it’s not surprising that my characters aren’t confined by their geographies, or even their identities. We are all travelers in a spiritual sense, too, for nothing we hold on to–our homes, our identities, even our psychologies–remains the same. 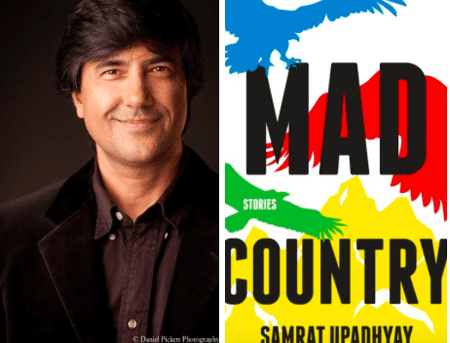 Aside from the Earthquake, what are some of the more notable changes to Nepalese culture and current affairs that you’ve noticed having lived away from the country for so long? In what ways is it modernizing, and in what ways is it reticent to do so?
Given that Nepal opened up to the outside world only the 1950s, the transformations in the country since then have been remarkable. The first highway in Nepal, connecting it with the Indian border, was built in 1956. Before this, dozens of porters transported individual cars on bamboo poles into Kathmandu, the only city with driveable roads. This was the time when Americans were moving to the suburbs, marching for civil rights, and gearing up for rivalry in space exploration with the Soviet Union. The first jet airplane landed in Nepal on 1967. When I was a teenager in the 70s, we’d go to Kathmandu airport to watch a handful of airplanes that landed or took off. Until the 70s, at a time when Americans were watching Mash, Sesame Street, the Brady Bunch, Saturday Night Live, and Three’s Company, there was no television in Nepal. TV arrived in Nepal in 1985, a year after I left the country to attend the College of Wooster in Ohio. When I visited Nepal in 1988, the state-run Nepal TV dominated the airwaves, and when I visited again in 1992, people were watching not only Indian cables such as ZeeTV and but also American ones, such as Oprah, WWF wresting, and of course, the Jerry Springer show. Politically, too, Nepal has moved rapidly into the modern era, albeit with periods of great pain and suffering. The cloistered, feudal, oligarchical Nepal of the 1950s gave way to a strict one-party, monarchical rule for three decades, to be replaced by a celebrated multi-party democracy in the 90s, which was then followed by a Maoist civil war for a decade that left thousands dead. In the mid-2000s the king was booted out of the palace, and now Nepal is a full-fledged Federal Republic with a progressive constitution. There’s a growing awareness about social justice and the rights of marginalized communities.
Yet, religion and cultural customs still have a strong hold on the people. Many families still opt for arranged marriages. People’s faith in the gods has remained unchanged. Caste discrimination and superstitious beliefs are still strong, especially in rural areas. People are constantly trying to find a balance between their cultural heritage and a rapidly changing world.

You’ve been publishing fiction – both novels and short stories – for many years now. What keeps you inspired to write fiction? Are you also drawn to publishing non-fictive work such as a collection of essays or a memoir?
Fiction allows me flexibility to enter any world that I wish. And I get to create and discover characters who are unlike me or whom I may never encounter in real life. And the more fiction I write, the more my imagination gets stimulated towards even more interesting and vibrant fictive landscapes. But I also write essays every now and then, and I can see myself working toward a collection. I like the genre of the personal essay because it acknowledges individual experiences even as it offers insights into larger questions about the human condition.

Nepal bestows literary awards just like any other country, yet not too many Nepalese writers are published in the West. Why do you think this is so, and who are some other contemporary Nepalese writers you would like to highlight?
Nepal is a small country, and English is not a widespread language. Contrast this with India, which has a population 50 times larger and, through its colonial legacy, has a history of English literature written by Indians dating back to the 19th century. In Nepal, translation suffers from institutional support and lack of education, and many bad translations abound. As a result, even good Nepali writers writing in Nepali are read only locally or regionally. For those writing in English, however, the landscape is changing with globalization in publishing. Now you can live and write in Nepal, be published by an Indian publisher such as Rupa or Penguin India, and have your books sold in the US through Amazon. This was not possible when I first began publishing.