The Best Things to See and Do in Nepal 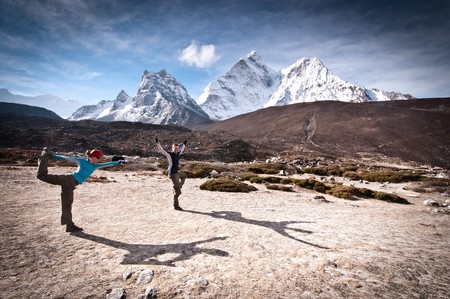 Yes, you could climb Mount Everest while in Nepal. But, there are actually so many other exciting, interesting and adventurous things to see and do in the little country that forking out the multiple-thousand-dollar fee to scale the highest mountain in the world isn’t necessary. From visiting Buddha’s birthplace to spotting enormous rhinos, here are our picks for the best things to see and do in Nepal. 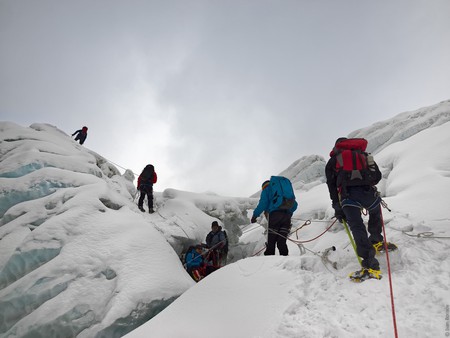 On the icefall heading to Island Peak / (c) Ivan Borisov/Flickr

Many of these mountains are climbable and many don’t require a prohibitively expensive permit or an extreme risk to life, as Everest does. Nepal also has a category of mountains called a ‘trekking peak’, which essentially combines the best of two worlds: trekking and climbing. Trekking peaks, such as Island Peak (6189 m.) or Mera Peak (6461 m.), require some mountain climbing experience, but you don’t need to be an absolute pro to give these a crack. If you’ve climbed lower peaks in other parts of the world and want to level up to a Himalayan peak, climbing one of these trekking peaks is a good place to start. 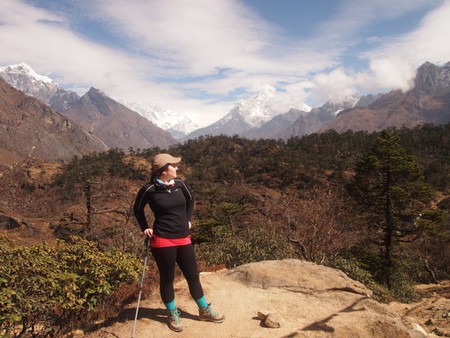 On the Everest Base Camp trek / (c) Elen Turner

If mountain climbing isn’t your cup of tea, try trekking instead. Treks in Nepal come in all lengths, levels of difficulty and levels of ruggedness and luxury.

If you’re short on time or just not sure if you’re up for an epic multi-week trek, check out some shorter trails around the Kathmandu Valley, such as Dhulikhel to Panauti via Balthali, or within the Shivapuri National Park. Around Pokhara, the Panchase trek is a pretty trail that’s ideal for families.

However, if you’re up for a mammoth adventure deep in the mountains, you’ve come to the right place. The classic Everest Base Camp and Annapurna Sanctuary treks are popular and famous for good reason: the mountain views are incredible, the cultures and traditional villages passed are welcoming and interesting and the infrastructure is good. On these popular routes, you can even enjoy some luxurious accommodation (for a price) in luxury lodges with hot running water, artwork on the walls and wait staff who welcome you with a warm towel upon arrival.

If an off-the-beaten-path adventure is more your thing, check out Upper Mustang, Upper Dolpo, the Nar-Phu Valley or Far-Western Nepal. You’ll need a few weeks for a trek in these regions and shouldn’t scrimp on support or logistics (i.e., hire a good guide!). These places are remote, with limited infrastructure, communication and places to pick up supplies. But the mountain views, fascinating culture and lonely trails will be oh so worth it. 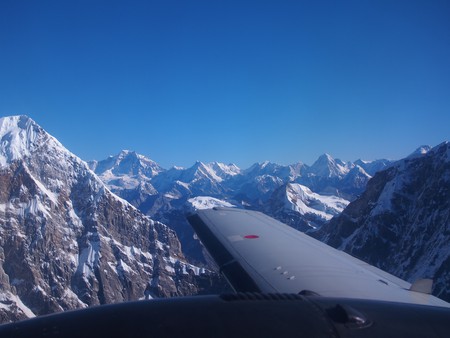 Sure, it’s possible to go on a scenic Everest flight from Kathmandu and the experience can be wonderful. But you needn’t fork out for a dedicated scenic flight to get the thrill of flying in the mountains. Regular flights that get you from point A to B can be extremely scenic in Nepal, as you have the Himalayan range running along the north of the country.

Fly from Kathmandu to Pokhara (or vice versa) to save yourself a tiresome eight-hour bus journey between the two cities and make sure to sit on the correct side of the plane for Himalayan views (right-hand side if heading to Pokhara, left if heading to Kathmandu).

If you’re planning on trekking in the Everest region, a flight to Lukla is usually necessary (unless you want to trek all the way from Jiri). This little airstrip that is cut straight into the side of the mountain is notorious as ‘the world’s most dangerous airport’, but in reality, the vast majority of flights to and from Lukla are without incident. It’s a thrilling ride over the terraced farmland and hill country of Nepal, and before you can even exclaim ‘oh my god is that the runway!?’, you’ve already landed.

If you’re heading to, or from, Mustang, a flight to/from Jomsom is the recommended way to avoid the gruelling bus ride from Pokhara. The 20-minute flight through the Kali Gandaki gorge, with the highest mountains in the world looming either side, is unforgettable. 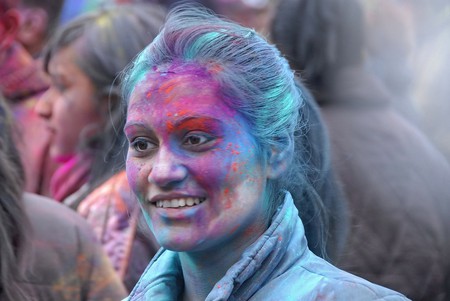 Nepal is a predominantly Hindu country, with a significant Buddhist minority, so the festivals are varied, colourful and fascinating. Some, such as Dashain, when practically the whole country shuts down, are largely family affairs, but others are more visible in the streets of Kathmandu and elsewhere.

Shivaratri (usually in March) is a traveller favourite and the only day of the year when marijuana possession and use is legal. That’s because Shivaratri celebrates Hindu Lord Shiva, who was known to imbibe marijuana, so devotees follow suit in his honour. Sadhus (Hindu holy men) from around India and Nepal congregate at the holy Pashupatinath Temple in Kathmandu, but it can get pretty crowded there. You won’t have to look far wherever you are in Nepal for signs of Shivaratri being celebrated. Holi is another favourite (also usually in March) and welcomes the warmer weather at the end of winter. It’s celebrated with water fights and coloured powders, so leave your valuables at home and expect to get wet.

Our favourite festival, however, is one that not so many tourists know about: the Rato Machindranath Festival in Patan, held in April/May. This is celebrated by Patan’s ethnic Newari community. For a few weeks leading up to the festival, a tall chariot is built on the side of Pulchowk Road. On the first day of the festival, thousands of locals gather to witness the pulling of the enormous chariot and the god statue inside through the streets. It is pulled through the streets for the next several days (and contributes to many a traffic jam and power outage around Patan). 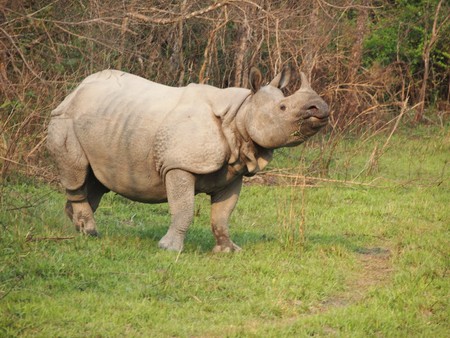 The Chitwan National Park, on the plains of Nepal bordering India, has run a very successful one-horned rhinoceros breeding program. If going on a safari here, you’re practically guaranteed to spot at least one rhino. Lodges in Sauraha and Barauli can arrange jeep, foot or bullock cart safaris in the national park and the buffer zone surrounding it. Along with the mighty rhino, you can also see elephants, deer, gharial crocodiles, an abundance of bird life and very occasionally, tigers. 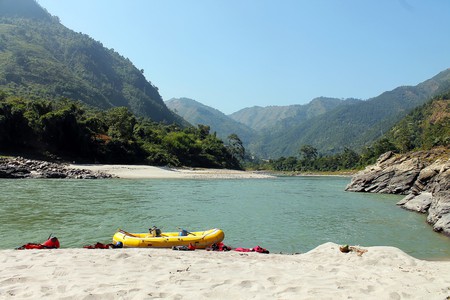 For those in the know, Nepal is one of the best destinations in the world to go white-water rafting. There are many long rivers that pass through stunning hill and mountain sceneries, with plenty of small to large rapids, clean water, white-sand beaches on which to camp – and all at a low cost.

If you’re after some quick thrills, try a single-day trip from Kathmandu (the Bhote Kosi or Trisuli Rivers) or Pokhara (Upper Seti). Rafting companies based in the cities will arrange transfers to the put-in point, and you’ll be provided with a filling meal of dal bhat afterwards.

For more extreme adventure, join a multi-day trip, where you’ll camp on beaches overnight, eat three meals a day prepared by your guides, bob, splash and race down the rivers all day. Highlights include the Sun Kosi (eight days) through eastern Nepal, the Tamur (12 days) that combines trekking and rafting and the Karnali (10 days) in far-western Nepal, which ends at Bardia National Park. 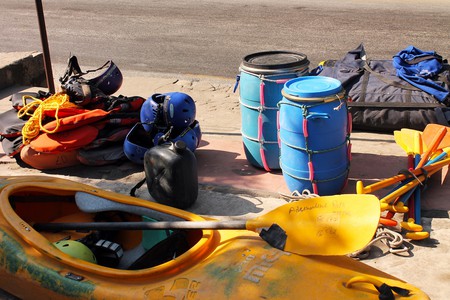 Those rivers are just as good for kayaking as they are rafting. Numerous white-water companies run four- to seven-day kayak clinics on the Trisuli, Bhote Kosi and Lower Seti Rivers, which can be altered to cater to learners’ needs. Once you’ve honed your skills, you can put them to use on a combined rafting and kayaking trip.

Go on a yoga or meditation retreat

Fancy a slower, more spiritual pace? Then join a yoga or meditation retreat. Kopan Monastery in Kathmandu runs well-regarded meditation and Buddhist retreats at the pretty monastery on the edge of Kathmandu. Popular yoga school, Pranamaya, runs regular yoga retreats in idyllic locations around Kathmandu, such as Hattiban and Pharping. There are also places in Lumbini, Buddha’s birthplace, where you can retreat from the world and enhance your spiritual education.

Visit the birthplace of the Buddha 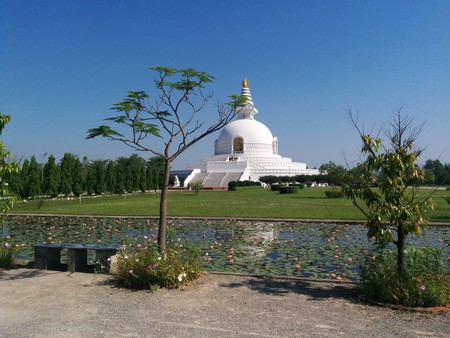 Speaking of which, there’s more than just meditation going on in Lumbini, the birthplace of Buddha. Whether or not you’re spiritually inclined, Lumbini is a fascinating town on the Terai, near the border of India. Archeological evidence supports the belief that Prince Siddhartha Gautama (better known as the Buddha) was born here in 623 BCE. The site was lost for centuries but is now a UNESCO World Heritage Site. At the Peace Park, you can tour monasteries that have been constructed by Buddhist organizations and governments from around the world, each in the architectural styles of the home countries. 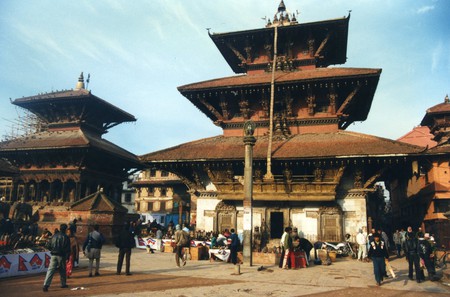 Nepal isn’t all about extreme sports and adrenaline-inducing adventures. There are many cultural and historical attractions to enjoy at a more sedate pace. The Kathmandu Valley, a necessary stop for most visitors, is home to the only international airport in the country. It is also home to seven UNESCO-listed World Heritage Sites: the Kathmandu Durbar Squares, Patan and Bhaktapur, the Buddhist stupas at Swayambhunath and Boudhanath, and the ancient Hindu temples of Pashupatinath and Changu Narayan. They’re all worthy of your time and geographically spread out, so don’t be in so much of a rush to get out into the mountains of Nepal that you miss the treasures of the capital city. 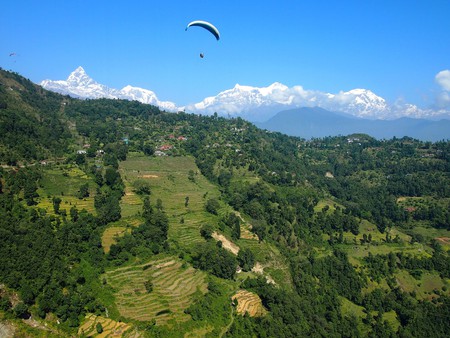 While running off the side of a mountain with nothing but a piece of fabric keeping you up may not seem like a great idea, trust us – in Pokhara, it is. Pokhara is one of the best places in the world to try paragliding. This is because of the pretty consistent thermals, which make it possible to fly for a long time. Oh, and of course the views of the lake on one side and the Annapurna Himalaya on the other, plus the villages and farmland below. Numerous operators run trips that will pick you up Lakeside and transport you up to the take-off point at Sarangkot.

Zip one of the longest zip lines in the world

Although the Zipflyer in Pokhara recently lost its title as the longest zip line in the world (thanks, UAE!), at 1,800 metres long, with a 2,000-foot vertical drop, reaching speeds of 120 km/h and taking two minutes to complete, this is not one for the faint of heart. The hills and mountains surrounding Pokhara can’t be beaten for sheer beauty, so if ambling sedately through the Nepali landscape seems too tame, give this one a try.