The Best Flea Markets In India 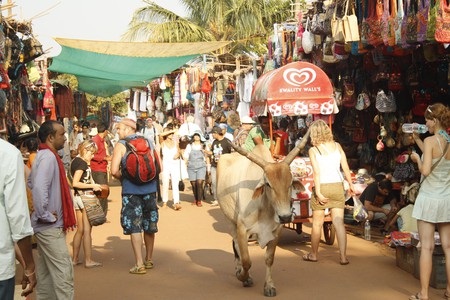 We live in a digitally dependent world. In an age where everything imaginable is a mere click or two away, the idea of trotting out into the market to procure your everyday essentials is deemed, well, antediluvian. And yet, the enigmatic charm of flea markets continues to attract crowds by the dozens even today. Be it the sight of vendors trying to make an honest living by selling everything from handcrafted trinkets to freshly made jalebis or the unruly racket of experienced hagglers at their wrangling best, a flea market is nothing short of an experience in itself. Engrave has rounded up the best flea markets of both historical and cultural significance.

Known to be a shopper’s paradise, Colaba Causeway is your one-stop-shop for everything you can hope to buy. This includes (but is not limited to) clothing, second hand jewelry, handicrafts, souvenirs, books, accessories, bags, knick-knacks, and gewgaws. Such is the allure of the causeway that it is thronged throughout the day by tourists as well as locals from around the city. Make sure your jostling skills are on point, though – you’ll certainly need them here.

Here’s an interesting fact – while many imagine Chor Bazaar’s name to be derived from the fact that it’s a thieves’ market, that couldn’t be further from the truth. Originally, the market was actually called Shor Bazaar, but that quickly got corrupted because the British pronounced it as ‘Chor.’ The name stuck, and India inherited the mispronunciation which is now the norm. The vendors at the bazaar have made the most of the reputation, though, and if your haggling skills are honed enough, you can find some of the best secondhand antiquities and trinkets in abundance.

Situated in a narrow lane that barely allows two people to walk abreast, Laad Bazaar makes up for the snag with its splendor and aesthetics. Visually stunning, the traditional bazaar is known for its beautiful bangles, semi-precious stones, pearls, and other forms of jewelry.

If you ask us, this isn’t just a flea market – it’s a one-day carnival. As the name suggests, it operates on Saturday Nights in Arpora, Goa and is known for its splendid variety of clothes, handmade accessories, shoes, bags, and even home decor items. Throw some delectable street food and live musical performances into the mix, and you’ll be glad you traded one night of clubbing in Goa for this wonderful experience.

You’ve seen it in Bollywood movies and heard its name in chart topper songs, but none of it can do justice to the actual experience of shopping at the place. With the best of fashion available at a bargain, it’s actually borderline addictive to shop here, and you can easily spend a whole day (if not two) at the market itself.

Colors, colors, and more colors. Parry’s Corner isn’t too bad, considering the fact that it’s packed with thousands of people at all times; it’s almost equivalent to traveling in a Mumbai local train at peak hour. If you don’t find the idea of trudging through large crowds daunting, though, head over for a shopping experience of a lifetime, where you can pick up anything from clothes to everyday household items at giveaway rates.

Traditional, handcrafted jewelry, anyone? Dubbed the shopping center of the city, Johari Bazaar is home to five hundred stores that cater to every mood and every need. Be it jewels, gems, precious stones, or just traditional Rajasthani gold jewelry, the market is full of skilled artisans with generations of experience in the field, which helps them find the best match for you. To add to that, the market is flanked by other markets like Bapu Bazaar and Nehru Bazaar, where you can find gorgeous garbs as well. Throw in the famous lassi at LMB into the equation, and all of it together makes for the perfect day out in the Pink City.

Every flea market has its own story and Anjuna’s is rather fascinating, to say the least. If the old wives’ tale is to be believed, the Anjuna Flea Market was started decades ago by a bunch of hippies who created handcrafted merchandise that helped them fund their stay in Goa. Today, the market only operates on Wednesdays and has the best merchandise from all around the country available at multifarious stalls that are set up by locals in the area. And of course, it wouldn’t be a flea market in Goa if there weren’t delicious street food and amazing live performances to go with the shopping, would it?

Ima Market is one of the oldest markets in India, and it might just be the most spectacular one too. Ima Market, which literally translates to mother’s market, is run solely by thousands of women, making it Asia’s largest (and in all probability, one of a kind) all-women’s market. The self-dependent women sell everything from handicrafts to fish in a remarkable setting that is simply unheard of and hard to find elsewhere. In fact, its origins are said to date back to the 16th century, making it one of oldest women empowerment movements in the country.

The word ‘haat‘ is used to describe a market in many parts of rural India. So Dilli Haat, essentially, is a traditional rural market. Situated in the south of the chaotic capital, the ‘haat’ has been operational since 1994 and has various exclusive and exotic handicrafts on offer that showcase the talent of the many skilled artisans and the terrific detailing and intricacies with which they work. Although you have to pay a fee of Rs. 15 to enter, it is redeemed entirely in the form of both the aesthetics as well as the many cultural and musical performances that one can enjoy while in the market.

If you’ve so much as skimmed through a few Bollywood movies, you’d know about the existence of Chandni Chowk. Built in the 17th century by Shah Jahan and designed by his daughter Jahan Ara, it remains one of India’s largest and busiest markets. Apart from selling fresh and absolutely delectable Indian sweets, the Chowk is also known for selling home decor items, various fabrics, junk jewelry, as well as electronics.

If you’re sightseeing in Jodhpur, there’s no way you won’t come across this magnificent market. Situated a stone’s throw away from the famous Mehrangarh Fort, the panoply of the market will quickly have you under its spell. Sold here are Mojris, handicrafts, textiles, bangles, and even unadulterated spices by a bunch of boisterous vendors who are known to drive a hard bargain.

Janpath is one of the more ostentatious flea markets in the capital. The name literally translates to the people’s path, and the kilometer-and-a-half stretch runs perpendicular to the Rajpath (the rulers’ path). The market is famous for its Kashmiri Pashmina Shawls, Kurtis, Himalayan and Tibetan products, as well as the many ebullient hawkers who sell a bunch of baubles and gimmicks.

The New Market in Kolkata was constructed in 1874 simply because the British colonists refused to rub shoulders with the Indian populace at markets. Since then, the New Market has endured two major fires, regular flooding, and an exotic pet-trading business that was only uncovered and stopped in the mid-70s. While the market isn’t half as dramatic today, its 2000 stalls sell everything from marble counters, saris, and crockery to Nahoum & Sons’ cakes that patrons have enjoyed for well over a century.

While it might come as a surprise to many, India was actually home to many Jewish people who lived peacefully in the country for over two centuries. Post 1948, many chose to move to Israel, but the few who chose to stay in Cochin own a majority of the shops in this market called Jew Town. The last known surviving Jews in the area make a living by selling spices, perfumes, shawls, handcrafted products, jewelry, and other similar products from around the country.