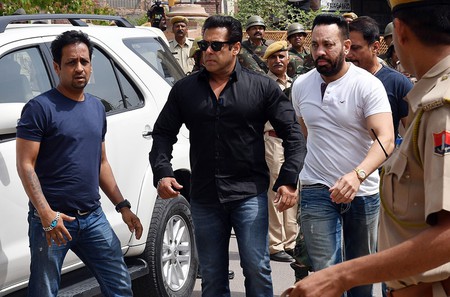 One of Bollywood’s biggest stars Salman Khan was on Thursday sentenced to five years in prison, after the actor was convicted of poaching rare Indian antelopes in Rajasthan back in 1998. Here’s everything you need to know about the case.

A twenty year saga comes to an end

In 1998, during the filming of the family drama Hum Saath Saath Hain, Salman Khan, 52, and his co-stars Saif Ali Khan, Tabu, Sonali Bendre and Neelam were accused of poaching Indian antelopes or blackbucks in Jodhpur, Rajasthan.

According to the Wildlife Protection Act, the hunting of this rare species is prohibited in India. The case against Khan was initially filed by the local Bishnoi community, who revere the blackbuck.

After almost two decades, Khan has been sentenced to five years in prison after an Indian court convicted him in the case. He has also been asked to pay a fine of Rs 10,000 (£109) for the offence. The other four actors charged with the crime, however, have been acquitted.

As Khan’s bail request will only be heard tomorrow, he will be spending the night at the Jodhpur Central Jail. The place isn’t unfamiliar to the Bollywood star as he’s already spent a total of 18 days here during three different stints in 1998, 2006 and 2007.

This is the fourth time Khan has had to face trial in the poaching case. He was acquitted in the first three.

Not the first run in with the law

In 2002, Khan was accused in a hit and run case when his SUV ran over homeless people sleeping on a pavement in Mumbai. He was said to be driving under the influence of alcohol. One person died and three were injured in the incident.

Khan claimed it was his chauffeur who was driving the car and not him. He was acquitted of all charges in 2015 due to lack of evidence.

The actor was also charged with harassing his ex-girlfriend and former Miss World Aishwarya Rai after their break-up in 2002. 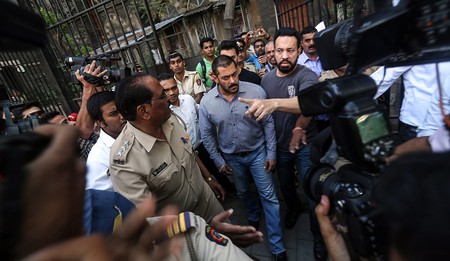 One of Bollywood’s biggest stars

Khan, fondly called Bhai (brother) by millions of fans, is one of India’s most beloved actors. He has starred in several blockbuster hits and many of his films feature in the highest grossing Bollywood films of all time. He is also one of the highest earning Indian celebrities and was even listed in the 100 highest paid celebrity entertainers in the world by Forbes in 2015.

Khan has also successfully hosted the reality series Big Boss since 2010. The TV show is based on the popular Big Brother series.

He is the eldest son of acclaimed screenplay writer Salim Khan, and has two brothers – both actors and film producers – and two sisters.

Although Khan has had some high-profile romances with leading Bollywood actresses, he has never been married.

While some have welcomed the verdict, most of his fans and sections of the Bollywood fraternity have expressed regret at Khan’s conviction. The hashtag #WeLoveYouSalmanKhan has been trending on Twitter ever since the news broke.

Some people have also mentioned that his humanitarian works over the years through his charity Being Human Foundation should’ve been taken into consideration while passing the judgement.

Feeling very sad that Salman Khan has been sentenced to 5 years in prison for allegedly shooting a black buck. 5 years! The length of sentence seems excessive and must be appealed. @BeingSalmanKhan has all my sympathy and support. #WeLoveYouSalmanKhan

I can’t help thinking @BeingSalmanKhan is being prosecuted because if his Stardom. Did he actually hunt and kill a #BlackBuck ? Im praying #SalmanKhan will be released soon. #BlackBuckVerdict

For all those who are saying Salman Khan is very good human being & should be pardoned, please note than “good” human beings don’t shoot animals for pleasure.

Salman Khan found guilty in the #BlackBuckPoachingCase.
Finally, some justice for that blackbuck’s great-great-grandchildren.