The 13 Most Unusual Things to See and Do in China 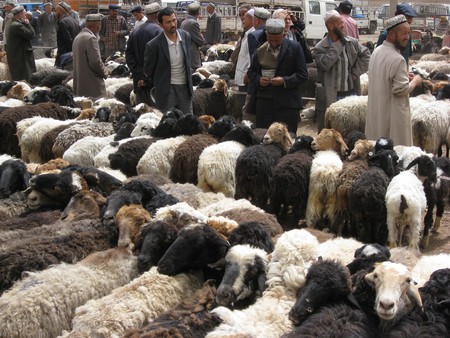 Far beyond the Great Wall and Tiananmen Square, China has worlds of strange and unusual sites to see. From ghost cities to kissing dinosaurs, explore them all here and write a new China bucket list you never knew was possible.

Can’t afford a trip to Europe? Don’t worry, China’s got you covered. From a near-exact replica of Austria’s lakeside village of Hallstatt in Luoyang, Henan to an idyllic British town on the outskirts of Shanghai, China can’t get enough of bizarre knock-offs. While most of the towns were designed as high-end housing developments to encourage migration out of the country’s packed city centers, the majority stand nearly empty save for young couples taking wedding photos. 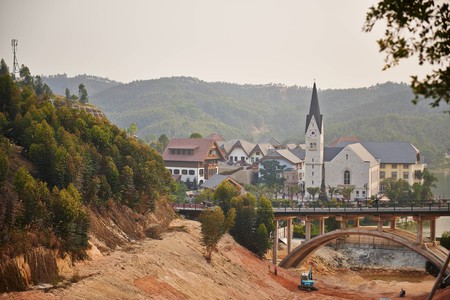 Walk through an abandoned island

Houtouwan is an abandoned fishing village on Zhejiang province’s Shengshan Island. Once a bustling community of over 2,000 people, Houtouwan became a ghost town in the early 1990s when residents left in search of better educational opportunities. Since then, the village’s structures have become overgrown by vines, making the island an eerily beautiful spectacle that few adventurers will ever see. Although only 65 kilometres (40 miles) from Shanghai, Houtouwan is not easy to get to. In fact, the journey requires a combination of bus, boat, taxi, and boat again, taking a rough total time of four hours.

Huaxi is known by locals as the ‘richest village in China,’ with residents claiming that they all have over $100,000 in their bank accounts. The village, located in Jiangsu province, was founded in 1961 by Wu Renbao in order to be the model of Chinese communism. Each resident was gifted an identical house and car and given stock in the village in exchange for working seven days a week at one of the village’s many factories. If a resident leaves the city at any time, however, he or she forfeits all benefits. Migrant workers, who reportedly make up roughly 95% of Huaxi’s workforce, do not get the same benefits as do the ‘real’ residents. Whether this village is a utopia or a dystopia is for you to decide, but even if you would not want to live in Huaxi’s world, you can’t deny the odd charm of its Stepford-level creepiness. 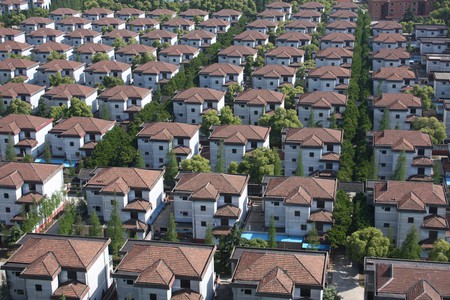 Ride a ferris wheel on top of a mall

Brick and mortar shopping may be dying in the West, but it is not going down without a fight in China. If you find yourself marveling at a fancy-looking building in any of China’s major cities, chances are it’s a mall. There are malls for everyday shopping, malls for upscale shopping. There are malls that specialize in board game cafes and others just electronics. Then there’s Joy City Mall in Shanghai. The ‘City; in the name isn’t a coincidence. In fact, there is practically an entire city within Joy’s four walls. This place has everything: four – four! – separate food courts, a movie theater, a floor dedicated to handicraft workshops (cookie baking, bookbinding, terrarium building), a bar ‘street,’ and even a giant London Eye-style ferris wheel on the top.

Get phallic at Danxia Mountain

Located in the northern part of Guangdong, Mount Danxia is known for, well, looking like a giant sandstone penis. The mountain range doesn’t get its fill of human anatomy with just that, though. There is also a rock opening that resembles a vulva, overhanging stones which resemble breasts and a rock meant to look like a sleeping maiden. The rock formations all belong to the unusual Danxia landform category, which produces steep red cliffs and multicolored pseudo-karsts. 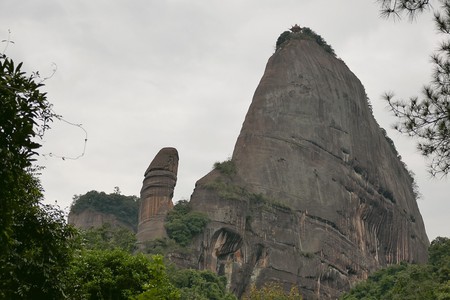 Stretching across the stunning peaks that inspired Avatar’s Hallelujah Mountains, the Zhangjiajie Grand Canyon Glass Bridge is the longest of its kind in the world. The bridge opened to much fanfare in 2016 and has been the location of many a viral video since then, with some tourists being hilariously unable to handle the intensity of the crossing. Despite its terrifying appearance, the bridge is safe. Before opening it to the public, authorities in Zhangjiajie invited people to smash the bridge with hammers and even drive a car across it to demonstrate its resilience.

Pose under kissing dinosaurs near the Mongolian border

Erenhot, known in China as Erlian, is a largely unremarkable town on the Trans-Mongolian Railway. Though a major hub for the border crossing between the two countries, Erenhot itself is sparsely populated by Chinese standards. The most notable residents, in fact, are dinosaurs. The site of many dinosaur discoveries, Erenhot marks its claim to fame with two giant kissing sauropods meeting across the highway. 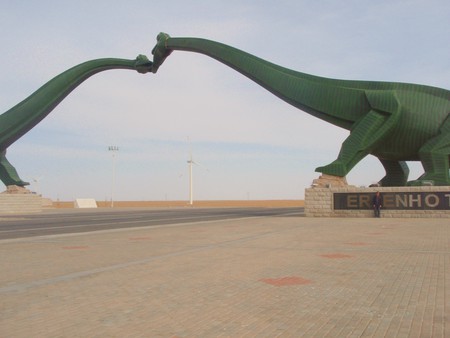 When developers acquire land from the Chinese government, they are mandated to build on it without hesitation. Of course, there aren’t always buyers for these hastily-constructed developments, leading to the purely Chinese phenomenon of ghost cities. With totally empty high rises and highways that look like a director’s vision of the world post-zombie apocalypse, the ghost cities make for an interesting and eerie look into China’s commodity housing economy.

Barter for livestock in Kashgar

Kashgar is one of the westernmost cities in China and borders Afghanistan, Pakistan, Kyrgyzstan, and Tajikistan. While much of the city has been modernized according to Chinese standards, there remains a vibrant old town with well-preserved traditional mud houses. Every Sunday in that part of town, local farmers gather to buy and sell sheep, goats, horses, donkeys, and even camels. As a camel isn’t your typical Chinese souvenir, the market also caters to tourists with a handful of handicrafts and foods. 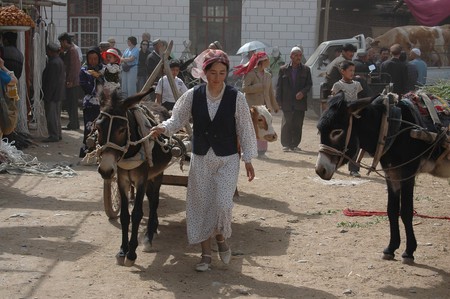 Pay your respects to General Tso

Yes, that General Tso. He may not have had anything to do with the creation of American-Chinese food staple General Tso’s Chicken, but the real General Zuo is famous in his own right. A famous military leader in the Qing dynasty, Zuo Zongtang successfully suppressed a rebellion and even promoted cotton cultivation in northwestern China. He is buried in Changsha, Hunan, where visitors can pay their respects at his rather unremarkable tomb. 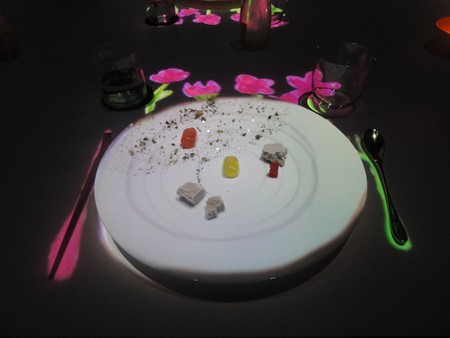 Try not to scream at Guangzhou’s Crocodile Park

Part of Guangzhou’s massive Chimelong amusement park system, Crocodile Park is not for the feint of heart nor for those who care deeply about animal rights. There you can watch the powerful beasts devour whole chickens, pigs jump off of high dives, and brave employees taunt crocodiles with sticks for sport. The park may not be the most humane, but it offers a vivid look at China’s modern-day relationship with animals.

During World War II, Shanghai offered protective visas to Jewish refugees from Germany, Austria, and Poland. As a result, more than 18,000 Jewish immigrants poured into the city in the late 1930s and early 1940s. In 1943, the occupying Japanese army required these 18,000 refugees to relocate to a 0.75 square mile (1.9 square km) area of the Hongkou district. Conditions there were poor, and the Chinese residents already living there refused to move, leading to overcrowding. The 1940s character of the ghetto alleyways has been well preserved and offers visitors a glimpse into a unique and little known time in history. Start your tour at the Ohel Moishe Synagogue, now known as the Shanghai Jewish Refugees Museum. 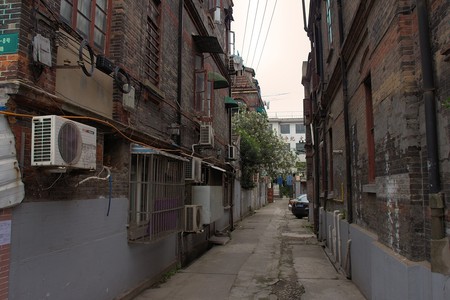