A Tour of Shanghai's Most Interesting Architectural Landmarks 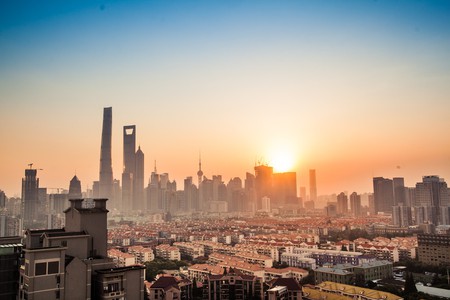 Shanghai Skyline from Behind | ©xuanzi85410527/Pixabay

Other than the food and the shopping, Shanghai is known for its unique and record-breaking architecture. From the super-tall skyscrapers of the Lujiazui financial district to the European-designed buildings of the Bund, the Art Deco 1920s sweethearts to a sore-thumb Soviet center, Shanghai’s architectural landmarks are as varied as the city itself.

Opened to the public in 2016, Shanghai Tower is one of the world’s most impressive architectural marvels. Rising above the city’s financial district, it represents a green future for China. A tower so tall you can only see the top on a clear day, the Shanghai Tower may only be the second tallest building in the world, but it has the world’s highest observation deck and can contain 16,000 people at one time. Its iconic 120° twist isn’t just for show. It helps reduce wind loads on the building by 24%, which allowed the construction team to use 25% less structural steel than a non green design of an equal height.

The Shanghai World Financial Center, more commonly referred to as “the bottle opener” due to the trapezoidal aperture at the top of the building, was opened to the public in 2008. As its name suggests, it hosts several world financial organizations, including those of banking, insurance, securities, and fund management. There are two observation decks, but many interested tourists and Shanghai residents choose instead to grab a drink from the Park Hyatt to catch the views of the Huangpu river and buildings below.

The Jin Mao Tower takes its design inspiration from traditional Chinese tiered pagodas. Its proportions, like those of the similarly iconic Petronas Towers in Kuala Lumpur, Malaysia, are based on the number eight, the most auspicious number in Chinese superstition. There are 88 floors divided into 16 segments, each of which is 1/8 shorter than the building’s 16-floor base. The building was dedicated on August 28, 1998, keeping in theme with its auspicious design. Together, the Jin Mao Tower, Shanghai World Financial Center, and the Shanghai Tower represent the fruition of 1993 city plans for three super tall sister towers in the Lujiazui financial district.

The Oriental Pearl Tower is the original Shanghai skyscraper and is often one of the first things that comes to mind when people think of Shanghai. From its inception in 1994, it has functioned as a TV tower and tourist landmark, with 15 observatory levels and a revolving restaurant. Its design centers on two large, pearl-like spheres linked by three columns. When the LED lights on the spheres are lit up at night, the tower gives the impression of a string of glimmering pearls, ensuring the building truly lives up to its name.

Art Deco architecture gained popularity throughout much of the world in the early 20th century, but in Shanghai, its dominance persisted well into the 1940s before the Communist takeover. Its lasting influence can be witnessed all over town, particularly in the Former French Concession and the former International Settlement. To get a taste of this culturally significant architecture, head to the 1933 Slaughterhouse in historic Hongkou district. This converted industrial-chic space is now home to shops, cafés, and performance art venues and is a favorite of budding photographers, who see photographic opportunities in its labyrinthine steps and cold concrete angles.

Located on the Bund, the Fairmont Peace Hotel is steeped in history. It occupies what was formerly known as the Sassoon House, built by British Sephardic Jew Sir Victor Sassoon in the 1920s. Like the 1933 Slaughterhouse, the Peace Hotel follows a classic Art Deco design scheme, both inside and out. During the Cultural Revolution, the building was used as a meeting place for the notorious Gang of Four, still a hotel as per the original plans.

Built in 1927 around the same time as the Fairmont Peace Hotel, the Custom House remains one of the symbols of European colonialism in Shanghai. The Custom House was originally erected in the late 17th century under the Qing dynasty but was demolished in 1925 to make way for a more European design. Still, from the 17th century to today, the building has remained a customs house. It is now the focal point of the Bund, a striking contrast to the skyscrapers across the river and a constant reminder of the city’s unique early 20th century history.

Even before you know its history, it’s clear from the design of the Shanghai Exhibition Center that the building has something to do with the Soviets. The spire with a gaudy star on top sticks out against the grey skyscrapers that create the building’s backdrop and once made it the tallest building in Shanghai (at a mere 110.4 meters, 341 ft). The center was built in 1955 as a gift from the Soviet Union and dedicated as the Sino-Soviet Friendship Building. The central tower is modeled on Saint Petersburg’s Admiralty Building and takes design cues from Stalinist neoclassical architectural ideals. In 1968, the building changed its name due to the souring of Sino-Soviet relations and has remained state-owned ever since.

Tomorrow Square, the eighth tallest building in Shanghai, looks like it should be the headquarters for a supervillain. In fact, the pinnacle’s diagonal square that rises to a sharp peak gives the impression of a sinister man rubbing his hands together in preparation for his next scheme. The building is located in the People’s Square neighborhood and contains the JW Marriott Hotel, as well as offices, restaurants, and apartment units.

Jing’an Temple is not Shanghai’s most remarkable temple by a long stretch. It is, however, one of the city’s prettiest and most central. While the structure you see today was rebuilt during China’s last dynasty, the Qing, Jing’an Temple dates all the way back to 247CE. During the Cultural Revolution, the Buddhist temple was converted into a plastic factory but was restored back to its original purpose in 1983.