How the Old Summer Palace Came to Ruin 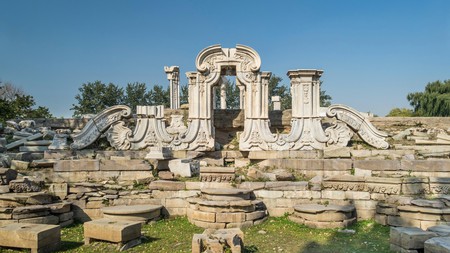 Beijing’s Old Summer Palace is known in Chinese as Yuanming Yuan, or ‘the Gardens of Perfect Brightness’. But one shameful incident casts a dark shadow over this imperial-age marvel.

While visitors flock to the opulent halls, gardens and pavilions of the Summer Palace, a UNESCO World Heritage Site, most ignore the charred ruins sitting just next door. But in its heyday, the Old Summer Palace was the pinnacle of imperial Chinese grandeur, covering more than 300 hectares (800 acres) of immaculately curated Beijing terrain. Enter Britain’s Lord Elgin, and the story of how the Old Summer Palace came to ruin — a tale well known within China’s borders, but virtually unheard of outside them.

Located eight kilometres (five miles) northwest of the Forbidden City — a site saved for special occasions — lies the Old Summer Palace, which was the main residence of Qing dynasty royalty, and the place where China’s ruling elite handled their day-to-day affairs.

Constructed in the early 18th Century by the Qianlong Emperor, this over-the-top palace complex was five times bigger than the Forbidden City down the road. The Old Summer Palace was an intricate web of buildings, paths, lakes, gardens, bridges and halls that housed a mighty collection of priceless cultural treasures. At least, it was until the Second Opium War rocked it to its foundations. 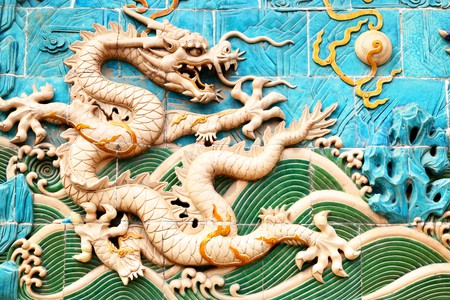 Rumbling between 1856 and 1860, the Second Opium War pitted the Qing dynasty against Britain and France over international trade. To put it simply, Britain wanted to sell opium in China, and China wanted to stop them. France joined forces with their European neighbour, and when the invading forces gained the upper hand, they sent a small party to negotiate China’s surrender. Meanwhile, soldiers looted anything they could get their hands on in the Old Summer Palace.

Bad move. The Chinese were in no mood to negotiate while the Anglo-French forces plundered everything in sight, so they imprisoned, tortured and killed 20 men in the negotiating party. Then, in a characteristic display of British restraint, High Commissioner Lord Elgin ordered the destruction of the Old Summer Palace – the final act in a bloody war. 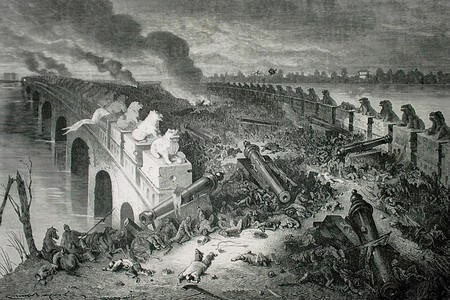 It took 4,000 British and French soldiers three whole days of spiteful violence to burn the palace complex to the ground — an attack regarded as the single largest act of vandalism in China’s modern history. More than 300 maids and eunuchs were torched to death while they were hiding from the intruders.

The European forces pillaged a bounty of rare cultural artefacts — ancient books, gold, paintings, bronze sculptures, porcelain, silks, you name it. Lord Elgin organised an auction and the soldiers shared the spoils. While some items have been repatriated to China, the treasures can still be found in museums and homes around Europe. One example of a rare breed of dog was even taken back to Queen Victoria, who nicknamed him Looty.

Victor Hugo, the French author better known for The Hunchback of Notre Dame and Les Miserables, reflected on the disgrace in a letter in 1861. “One day two bandits entered the Summer Palace. One plundered, the other burned,” Hugo wrote. “And back they came to Europe, arm in arm, laughing away. We call ourselves civilised and them barbarians. This is what civilisation has done to the barbarians.” 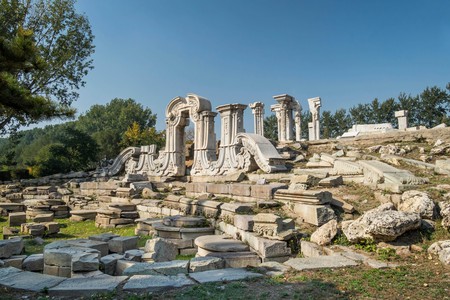 Most of the remnants left standing after the onslaught belonged to the so-called Western Mansions – European-style quarters that boasted pavilions, mazes and fountains that wouldn’t have looked out of place in Versailles or Vienna before they were burned to the ground. The vast majority of the palace was fashioned in the traditional Chinese style, which didn’t stand a chance in the face of the Europeans’ fury.

The handful of buildings that did survive suffered further damage in the 20th century, first from locals, who pilfered building materials from the wreckage, then from Communists keen to erase any trace of China’s imperial past during the Cultural Revolution. This changed after the government designated the Old Summer Palace a historical site in the 1980s.

Today, Chinese historians and art collectors are working to reconstruct the grandeur of the razed ruins, either through digital renderings 0r by buying back stolen relics at auctions. Nevertheless, the remains of the Old Summer Palace are still an open wound on the Beijing cityscape and on China’s national psyche.

Plan your visit to the Old Summer Palace

China has seen a surge in national pride since the end of the Cold War, and a renewed interest in the country’s imperial past has shone a new spotlight on the Old Summer Palace and the tragedy that unfolded there. Rebuilding is a sensitive subject. Proposals to reconstruct the Old Summer Palace have been met with stiff opposition, although the lakes have been cleared of debris and refilled with water, and some buildings, like the Zhengjue Temple, have been refurbished. On the whole, though, this vast complex remains an expanse of scattered rocks and unkempt lawns, only offering a faint glimpse into the imperial majesty of 19th-century Beijing. The public can explore the grounds of the Old Summer Palace for a small fee, and there’s also an exhibition hall that illustrates what the site looked like in its heyday. Situated in the Haidian District in northwest Beijing, the palace has its own stop on the Beijing Subway – Yuanmingyuan Park station on Line 4.

This is an updated version of an article originally created by Fran Lu.