The notes and rhythms of Ghana’s Highlife music genre have developed to the sound of the country’s traumatic history and political turmoil. Yet, the genre evolved from a past filled with tradition and survived, propelled by musicians such as Nana Ampadu and Osibisa. We take a look at the gradual evolution and current state of Ghanaian Highlife – and its younger cousin, Hiplife. 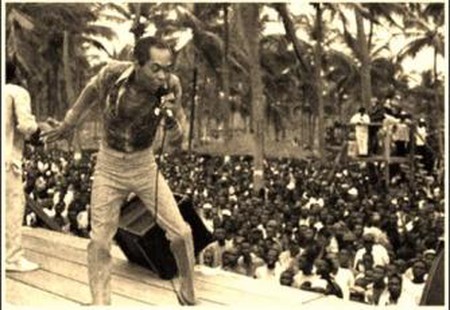 Highlife music has not been a single movement, it has not been a statement of political intent, of uprising or the idealism of a particular group; no use of it to channel a particular message has subsumed its sound. No one group has made it their own, and therefore it has remained a wonderfully rare example of free spirit and expression of the human experience.

The foundations of the tradition are grounded, initially separately, in the north and south of Ghana. The sub-Saharan north has long acted as a cultural catch-all for the traffic of Western Africa at large. The Songnai and Mali empires caused ethic migration and the blurring of cultural borders in West Africa, bringing praise-singing traditions of the Frafra, Ghurunsi, and Dagomba people in the northeast together with that of the Dagara, Lobi, Wala, and Sissala in the northwest.

This spiritual identity is tempered by the osmotic folk music of the south. The music of southern Ghana seems historically to have taken a more internal and pragmatic focus; the settled Ashanti south incorporated music as a relief and pleasure in and of itself rather than as a billboard for their identity as a tribal entity. This is reflected in the simpler folk style, which has simmered into existence with a gradual influence from neighboring Benin and Tongo.

The emergence of the music that has come to be defined as “Highlife” can be traced back to the early 20th century and the international interest in Africa’s Gold Coast, as it was known. The constant influx of Europeans since the 15th century introduced the indigenous population to hymns, shanties, and marches, and as the Ashanti people organized and attempted the uprising which resulted in the War of the Golden Stool, a musical tradition was born, and the seeds of Ghana’s identity were sown.

Though the Ashanti uprising against the British was initially unsuccessful, it was their assertiveness which led to the creation of an art powerful enough to hide in plain view what it was intended to express. The Ashanti people wanted to be free and this shared objective gave rise to musical union. Traditional African instruments such as the seperewa harp-lute and the gankogul bell were combined with European harmonies and guitars as people expressed themselves through song. Perhaps, even the appearance in which the genre took its name is indicative of the cultural displacement effected upon the colonizing forces.

With the failed uprising behind them, and no opportunity for self-governance forthcoming, attention was given to social matters and the formation of strata. As it became fashionable for people to be seen in certain hotels with certain bands playing, the media and fledgling record companies attached an aspirational label to the by-then sonically defined genre. The music was not simply part of “living the highlife,” it was, in itself, Highlife. The self-confidence of bands and musicians took off and has continued for generations, allowing the evolution of the form. In the wake of the Second World War, jazz, blues, reggae, and even funk influences gave rise to acts like Osibisa, who carried Highlife beyond Africa and into the living rooms of the world.

As the music evolved, the concerns and intentions of those who practiced it also shifted. When Ghana was formed in 1957, the Socialist-aligned government saw Highlife as a powerful tool for forming national identity. State-funded bands appeared in order to ensure that the correct image was propagated. The breakthrough onto the world stage and potential for the international fame and financial gains that commerce brings saw a huge increase in the use of the English language over the traditional Akan dialects, though this cultural compromise never took any deep political or cultural effect due to the dire economic state of the country at the time.

It was perhaps the terrible state of the economy in the 1970s and lack of opportunity to export the Highlife genre and capitalize on interest that preserved the genre from becoming merely a commercial tool. This economic suppression allowed artists like Nana Ampadu to appropriate the music as the voice of a people with protest songs such as Aware bone. At face value, the song describes the difficulties of marriage – an innocent topic to tackle, and relevant to many – but, according to colloquial account, was actually written about the “marriage” between Mother Ghana and Ignatius Kutu Acheampong, head of state between 1972 and 1978. This idiomatic use of the genre is a perfect example of its status as a tool for all to benefit from. 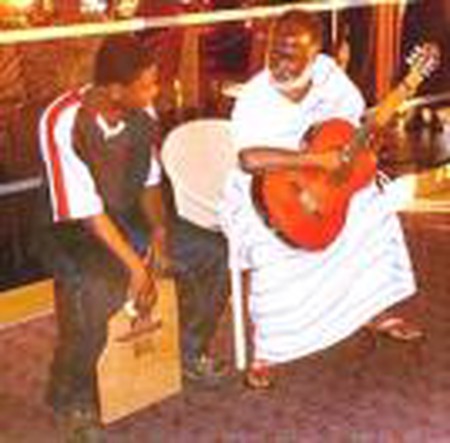 The prevailing popularity of traditional artists like Koo Nimo, a Ghanaian national treasure, despite the influx of American influence in the 1990s, shows that the affinity with the sound transcends the normally fickle forces that guide the music industry. Some Ghanaian artists have found international fame through the Hiplife style, which became popular at the turn of the century – artists like VIP regularly playing shows in North America and Europe – but at the cost of trading something of their national identity. Fortunately, the classic Highlife style has remained and resisted the pull to the Hiplife middle ground.