El Anatsui conquered the art world when he unfolded a flaming drapery of sterling elegance in front of a stunned crowd at the 2007 Venice Biennale. His work titled TSIATSIA – searching for connection (2013), a site-based, courtyard installation for the Royal Academy’s 245th Summer Exhibition, won the prestigious Charles Wollaston Award. 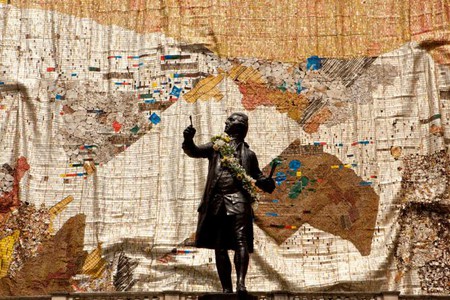 El Anatsui, TSIATSIA – Searching for Connection, 2013, on the façade of the Royal Academy of Arts | © Jonathan Greet / Courtesy of October Gallery, London

Born in Ghana in 1944, El Anatsui grew up in the midst of the exciting West African post-independence art movements of the 1960s and 1970s. This greatly influenced his multi-disciplinary work, inspiring him to break conventions and experiment with diverse mediums from sculpture to media. Using myriad surprising and “poor” materials such as whisky bottle caps, chainsaws and kente cloth (the traditional Ghanaian fabric), he has created equally surprising objects – from obituary platters to cassava graters and iron nails – and his inventiveness has turned him into a major contemporary African artist. 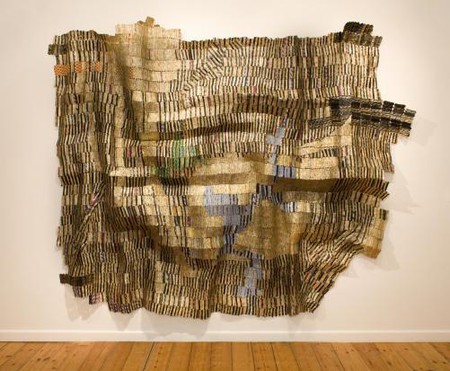 Everyday artifacts fascinate Anatsui, and he has relentlessly explored their meaning through sculptures and installations. Take his whisky bottle caps: steering away from the triviality of such functional objects, he sees beyond their materiality as they become a relic of the slave trade – a brutal reminder that African slaves were exchanged for European liquor. This approach takes root in Anatsui’s passion for the African continent, its history, topography, and traditions. Chronicling the shaping of Africa and its people through his work, the artist describes and interrogates the continent’s ever-evolving relationship to consumption and cosmopolitanism.

With a predilection for natural colors, gilded, and warm – perhaps what best denotes Africa in our popular imagination – Anatsui finds elements in his own environment that bring his ideas to life. He argued in 2004 that “art grows out of each particular situation. I believe that artists are better off working with whatever their environment throws up [… ] I don’t think that working with prescribed materials would be very interesting to me – industrially produced colors for painting. I believe that color is inherent in everything […] and that you’re better off picking something which relates to your circumstances and your environment.” 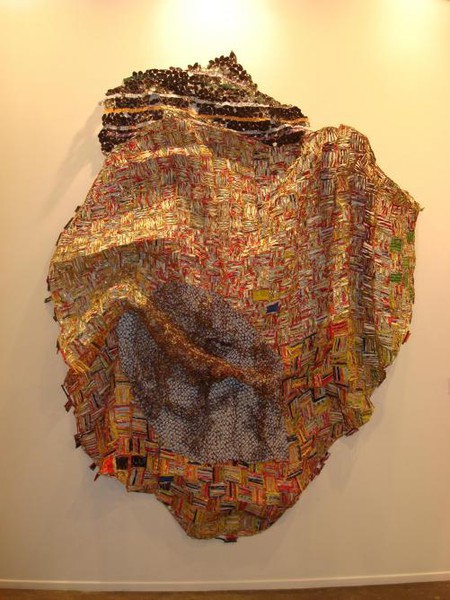 Portraying the intangible universe with palpable objects that can be transformed, recycled or destroyed is perhaps a metaphor for the strong connection that Anatsui observes between profound societal changes, both local and international, and individual experiences of day-to-day existence. No other work articulates this tension better than New World Map, which sold for $658,403.87 (£541,250) in May 2012 in London. Bonhams, the auction house, described the large tapestry as follows: “[El Anatsui] has literally redrawn the continents to connect societies that fused historically in the colonial period, yet developed as a patchwork in their modern-day existence. Peoples that were once disparate are tied by the metallic connective tissue in Anatsui’s sculpture.”

Anatsui, who is concerned about the vanishing of millennium-old African traditions, has drawn themes from various indigenous artistic practices to somehow maintain the frail continuity between history and modernity and embrace the rich legacy of the past. But the artist is not averse to modernization; instead, he advocates for a better integration of past and present, global and local. This is reflected in the flexible nature of his works: they are mutable sculptures that can be altered, shaped, transformed – free of the shackles of fixity, and able to adapt. It is also visible in Anatsui’s insouciant approach to the hanging of his draperies: arrangement is left to contingency, and the artist is quite happy for galleries and staff to do as they please.

El Anatsui was born in Anyako in 1944 – the youngest of 32 children on his father’s side – and studied at Kumasi’s University of Science and Technology. Ghana had only recently gained independence, and as a result, the art curriculum was still very much centered on Western practices. After graduating, Anatsui obtained a teaching job while studying West African ideographs. He created his first piece with exclusively local materials, which this would remain a major preoccupation throughout his career.

Alex Worth from the NYT describes the works of Anatsui as “masterpiece detritus: once mundane objects that permanently transform our expectations about what art is, and where it comes from” – in the same vein as the bicycle wheels of Duchamp or Koons’ basketballs. “An elegant emulsion of history and craft, Post-Minimal form and Pop recycling” adds the journalist. 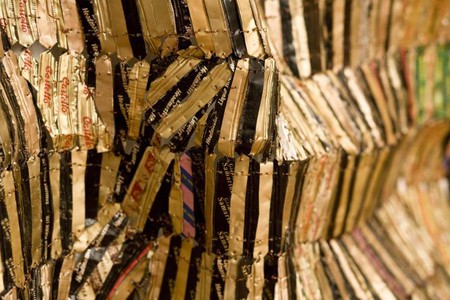 An artist as well as a teacher at the University of Nigeria – the country where he spends most of his time – Anatsui has bravely tackled serious social, political, and historical themes. In 2007, the Ghanaian stole the show at the Venice Biennale after draping the façade of the Palazzo Fortuny – a work reminiscent of Christo’s wrapping of public spaces. Fresh and Fading Memories was “uplifting,” the antidote to the other pessimistic displays, confessed Susan Vogel, a professor of African art at Columbia University.

This was a breakthrough for the artist, whose works had until then remained slightly marginalized, even though they had been displayed at major international venues. At the 2010 Dubai Art Fair, another stunning piece presented with the London-based October Gallery won Anatsui widespread critical acclaim: the gleaming In the World but Don’t Know the World?, whose harmonious golden colors create a dazzling tableau.

Today Anatsui can be admired at major international institutions such as the Paris Centre Pompidou, the British Museum, the Smithsonian Institution, and Kunst Palast. In addition, Susan Vogel has produced a wonderful portrait of the artist in her documentary, Fold Crumple Crush, which provides exclusive access to the mysteriously charming man, his art practice, his home, and his dreams.

At the 2013 Royal Academy Summer Exhibition, El Anatsui unveiled his largest wall-hanging to date, TSIATISIA – searching for connection, an enormous, sumptuous piece that, draped on the façade of Burlington House, greets visitors as they enter the RA Courtyard.

Yet despite his growing fame and success, it is still in a small warehouse near the Nsukka campus that Anatsui and his team design and assemble the intricate metallic and plastic patterns that compose the artist’s splendidly sensual draperies and sculptures. From Ghana to Venice, the major interest of Anatsui remains unchanged: working with things that “link people together.”