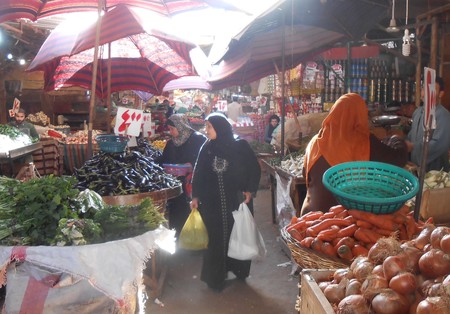 On Fridays, the narrow streets and alleyways of the al-Sayyida Zainab market host a multitude of vendors—a bird’s-eye view would show flimsy stands divided into pseudo-districts of groceries, furniture, electronics, clothes and food stalls. Navigating the streets of sellers who stand in front of their booths or walk by with balanced merchandise on their heads is a dizzying experience that will reveal who the heart of the market is.

As in any Cairo market, it is difficult to focus on a single object or person; being in al-Sayyida Zainab is an attack on the senses with its plethora of sights, sounds and smells. But even more interesting than the multitude of commodities sold are the people who sell them. To the keen observer and listener, frequenting the Friday market guarantees a rich cultural experience during which the vendors’ stories animate the space. Given the opportunity of someone who will lend them an ear, it’s the women of the market who’ll have the most to tell about their lives and their businesses. 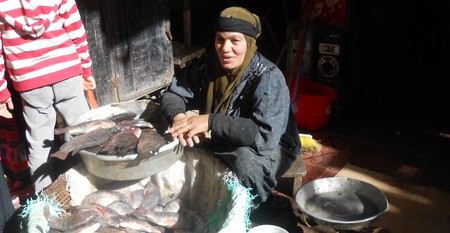 The market is not solely dominated by men or even boys, who typically walk around trying to sell pigeons they have trapped or litters of kittens and puppies. It is increasingly common in the market to find women crouched beside baskets of vegetables or crates of chicken. Early on Friday mornings, women are even more notable since most of the men are gathered within mosques for the weekly communal prayer. Women take this opportunity to set up their own stalls without the inconvenience of a crowded workspace. Fayza and her daughter-in-law are two women who prepare their booth early in the morning with the help of Fayza’s three sons. After the bird cages filled with their wares are set up, Fayza sends her sons away, claiming that they only bring ruin to the family business because “they are tricked easily”.

Fayza’s daughter-in-law Radwa quickly learned the ropes and has now become indispensable to Fayza’s business. “My husband doesn’t mind”, Radwa says, shrugging. “And even if he did it doesn’t matter because he has no say in it. Fayza makes all the decisions.” 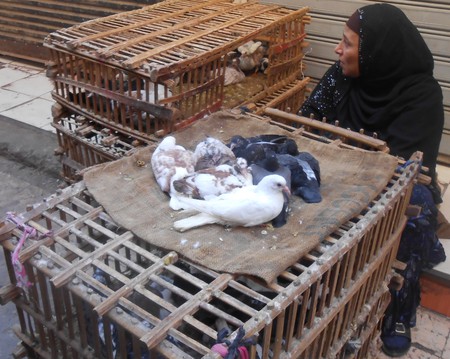 Another woman who works in the animal vendor area of the market is Noha. As her father’s only daughter, she’s worked with her brothers in her father’s bird shop for the past five years. Despite having two older brothers and one younger one, her father trusts her the most with the running of his shop after he suffered a heart attack that almost left him paralyzed. Today, Noha has cultivated quite the following of customers and has partnered with other sellers to invest in imported merchandise. She runs everything in the shop, from recording measurements for custom-made cages and commissioning their construction to managing the finances of her store and even her uncle’s neighboring restaurant.

Commenting on her position in a predominantly male environment, she says that “when it comes to business, it doesn’t matter if I’m a man or a woman. I have to work. Quickly the people started to realise that I’m good at what I do, so they don’t give me trouble”. One of Noha’s customers, who has been loyal to her for almost a year, says that her work is the best. 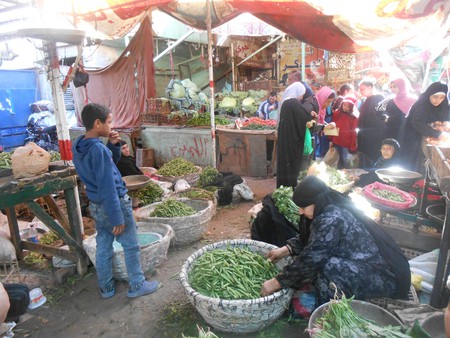 There is a strong female presence in the market, something made very obvious as women occupy the most strategic locations of the widening streets or as they assert themselves to their male neighbors. Their status as working women often requires no justification, since most of the women see their work in the market as an extension of their domestic chores—they’re simply coming to the streets once a week to sell the poultry they have been raising on the roofs of their houses. If justification is ever needed, it is enough to bring up the current deteriorating economic conditions.

The women of Cairo’s market make their work seem effortless as they haggle with customers or other sellers. They hold an air of authority throughout the course of male-led exchanges and are able to gracefully and commandingly control their merchandise while simultaneously keeping an eye on each customer. Even their voices are more audible than those of men. As one woman concisely put it, “even the street is named after a woman”.