The Best Places for Live Music in Montevideo

La Trastienda Club, Montevideo | © Beatrice Murch/Flickr
A great way to get to know a city’s culture is through the local music. It’s wonderful to tap into local and traditional music when you travel, but it’s not always easy to know where to head. Here’s a list of the best places to hear live music in Montevideo, so you don’t miss out on the highlights of the city’s music scene.

El Milongón is the perfect place to discover traditional Uruguayan music and dance, which plays a very strong part in its urban culture. The live show will allow you to come into contact with the most authentic local styles, like candombe and tango. Few people know that tango actually originated in Uruguay, and here you will witness it performed by emblematic national figures. The impressive show gathers more than 35 artists on stage. The performance can be enjoyed with dinner, so you can taste some typical dishes and local wine while watching the show. 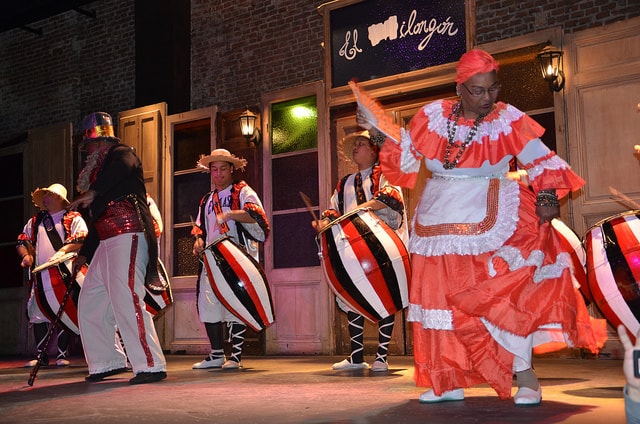 Usually, Plaza Mateo is home to a very popular night amongst teenagers, called Sparrow. If you avoid that night and actually attend a gig instead, it’s one of the best venues around. There’s only one large standing area facing the stage, with a couple of bars on the sides. Plaza Mateo is outdoors but covered by a massive tent, which makes it great for hot summer nights when you need a breeze (especially if it’s a crowded event). The artists booked are completely varied so make sure to listen beforehand if you’re going to try something new.

Concert Hall, Theater
This club has two bars, a large stage and two separate viewing areas, but nonetheless is small enough to allow for an intimate show. La Trastienda is one of many locals’ favourites because of the dreamy ambiance that the venue promotes, and the quality of the artists that perform. It usually books talented international and local artists with a very arty vibe, emphasized by the stage’s red curtains reminiscent of ‘Twin Peaks’. Book balcony tickets to sit at tables or on couches, or stand at the big area in front of the stage.
More Info
Open In Google Maps
Av. Daniel Fernández Crespo 1763, Montevideo, Uruguay
View menu
Visit website
Visit Facebook page
Send an Email
Give us feedback

Tundra Bar is located in a very cultural neighbourhood, Barrio Sur. This is where candombe, traditional music in Uruguay, first originated. Tundra Bar is simple and classic, with strong acoustics in a small space. It usually features underground local bands and DJs, so it’s a great opportunity to discover emerging artists and the current local music scene. You can sit at a table and order drinks and very tasty food (they have great vegetarian options).

Concert Hall, Music Venue
Founded by artists, this space started as a bar and then evolved into a proper music venue. Bluzz Live was born from the notion that the audience should be able to intimately connect with the performers, standing and dancing a few meters away from the stage. The music is diverse, they book artists of different genres, but the predominant vibe is blues and rock. There are very few places to sit so expect to be standing and dancing most of the night, while enjoying drinks from the long bar.
More Info
Open In Google Maps
2049 Daniel Muñoz, Montevideo, Departamento de Montevideo, 11200, Uruguay
+59824024545
View menu
Visit website
Visit Facebook page
Send an Email
Give us feedback

Museum
“The Wine Museum” is primarily a boutique wine cellar where you will have the opportunity to try some of the best regional produce. You will find their best bottles in the underground, stone-walled wine cellar, where you can participate of a wine tasting session and occasionally attend very intimate recitals of Baroque and Classical instrumental music. Sit at the Wine Bar to try different wines by the glass or by the bottle, with the assistance of a Sommelier, if you prefer. At night, you can enjoy live music, art, theatre, and Tango shows. You will usually hear Jazz, Tango, or Bossa Nova from the many talented artists that play.
More Info
Open In Google Maps
1150 Maldonado, Montevideo, Departamento de Montevideo, 11100, Uruguay
+59829083430
View menu
Visit website
Visit Facebook page
Send an Email
Give us feedback

Located in the historic district of Montevideo, just a few meters from the famous Solís Theatre, you will probably find fellow travellers enjoying live music in The Shannon. They feature live shows every day of the week, with typical Celtic music, Jazz, Funk, Soul instrumental, Blues and Rock, depending on the night. There is a wide variety of national and imported beers, both bottled and artisanal, as well as cocktails and whiskeys.