The Best Beaches in Uruguay

Uruguay’s natural landscape is not extraordinary. Most parts of the region are flat, the forests are few, and there are only a small number of ranges of hills. But, Uruguay has some of the most beautiful beaches in South America and the world. These can be found throughout the country, as well as in its capital city. When it comes to beaches, Uruguay really offers the whole package.

A city full of attractive beaches

The capital city of Uruguay, Montevideo also has a lot of beaches. The city is surrounded by the Rambla, which could be seen as border between city and sea, and is about 22 kilometers long. Therefore, it is very easy to reach the city’s beaches by walking, riding a bicycle or by public transport. Some of the prettiest beaches are Playa de los Pocitos, which is located very close to the center, and is a busy place for sports fans. Another one is Playa Ramírez, which is close to the Parque Rodó, and is ideal for families and suitable for wheelchairs, and Playa Malvín, with some of the calmest and clearest waters in Uruguay. 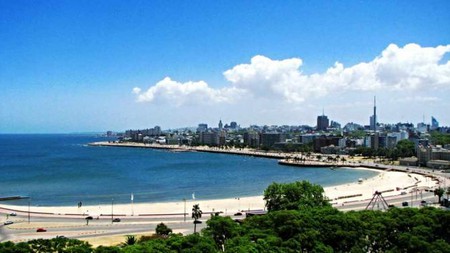 Beach with a lot of varied entertainment

Punta del Este is located in the department Maldonado, on the east side of Uruguay. It has three beaches, of which Playa Brava and Playa Mansa are the most popular ones for tourists. The most famous attraction is ‘Los Dedos’, a sculpture made by a Chilean artist. But there is also a lighthouse, a casino and an annual film festival, the Festival Internacional de Cine de Punta del Este. Also, party people will find this the perfect place to make the best of the night.

A beach for brave people

The full name of this beach is Playa Nudista Naturista Chihuahua, and it means that it is a beach for lovers of nudism. As Uruguay has a lot of beaches to offer, with some of the prettiest and calmest water in South America, tourist attractions, wide sandbanks and sports activities, Playa Chihuahua is another alternative for the ideal place of residence at the beach. It is situated in a beautiful area in between sand, sea, forests and creeks.

The longest stretch of beaches in Uruguay

Costa de Oro is a coastal section of Uruguay which is about 45 kilometers long and extends along several resorts and beaches. In the past it was an useless area, which was reclaimed by planting different trees and offering attractive activities for visitors. Mostly, Costa de Oro is visited by local tourists, but beaches like Costa Azul and La Floresta are popular places by foreign tourist too. All of them are highly recommendable, but the most beautiful ones are Neptunia, with its white and wide sandbanks and Jaureguiberry, which leads into a creek.